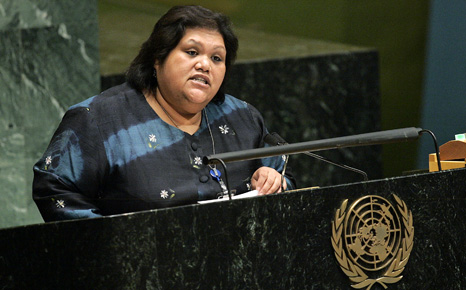 Small island state leaders have reacted with alarm at suggestions that some leading economies want to delay binding emission pledges until after 2015.

A recent meeting of the Major Economies Forum (MEF) that involves the USA, China and EU among others ended with a summary revealing that some participants feel that concluding a global emissions deal in 2015 might not be feasible.

But in a statement emailed to RTCC, the chair of the Alliance of Small Island States (AOSIS) Ambassador Marlene Moses emphatically rejects this suggestion, saying it would breach previous agreements.

“At the 2011 UN climate conference in Durban the international community made two commitments central to tackling climate change for present and future generations: first, that we would ramp up efforts to cut the greenhouse gas emissions responsible for the crisis in the short-term and, second, that we would sign a comprehensive and legally binding climate treaty in 2015,” she wrote.

“We all have an obligation to do everything we can to meet this imperative goal, beginning by taking immediate action to lower emissions at home, and working to raise expectations that the 2015 conference in Paris will be a success.

“We are still confident that it is possible to accomplish both goals and stand willing to work with all countries to ensure we do.”

In Durban, the EU, AOSIS and Least Developed Countries group forced through the 2015 deadline under pressure from China, Brazil, the USA and India, whom RTCC understands wanted a more relaxed schedule.

Scientists believe global emissions have to peak this decade if the world is to avoid warming of beyond 2C, levels they say could trigger a series of dangerous ‘tipping points’, such as the melting of the permafrost.

Yesterday’s 2013 Energy Outlook report from the US Government underlined the ambitious scale of emission cuts required if the 2C target is to be avoided.

Responding to a set of emailed questions from RTCC, UK climate minister Greg Barker, who attended the MEF talks, stressed the core elements of a UN emissions deal currently under discussion remain unchanged.

“The new agreement in 2015 should be rules-based, legally binding, and applicable to all,” he said.

“If we are to meet the objective of the Convention and achieve our agreed below 2°C goal, it is imperative that all countries work together to mitigate our emissions.”

Barker, who has attended the last three UN climate summits, also said fears the USA is seeking to undermine the binding nature of an emissions deal  by pushing a looser ‘pledge and review’ formula are unfounded.

“We have seen nothing from the US to imply the Agreement will not be rules-based and legally binding and we don’t understand what is meant by a reference to the US’s ‘pledge and review’ proposal in the context of the legally binding nature of the agreement and whether there is a contradiction,” he said.

Barker added he expects progress on a climate compensation or ‘loss and damage’ mechanism to be made at UN climate summit in Warsaw this coming November.

Separately, the Marshall Islands President Christopher J. Loeak has written an open letter to US Secretary of State John Kerry, calling on him to turn President Obama’s words on climate ambition “into action”.

Writing in the Huffington Post, Loeak invited Kerry to the Pacific Islands Forum in September, highlighting the “risks and threats posed by climate change” that both countries face.

“To focus discussions, we have decided on the theme ‘Marshalling the Pacific Response to the Climate Challenge.’

“This reflects our belief that, with the countries of the Pacific Rim accounting for more than 60 percent of global emissions and rising, the real fight against climate change must begin here. In June, President Obama asked if the U.S. would have the courage to act before it is too late.

“If the U.S. is serious about rolling up its sleeves and renewing its global leadership on climate change, you will pivot to the Pacific and join us in Majuro.”