As such it often acts as a collective conscience to the talks, offering a constant reminder why it is so important to control greenhouse gas emissions.

Recently reports emerged that the LDCs were considering cutting their own levels of emissions and taking leadership on the international stage.

New LDC chairman Prakash Mathema from Nepal has outlined the group’s key positions in a Q&A with RTCC.

1. How does the LDC Group reflect on the ‘Doha Gateway’ and the current status of talks?

The LDC Group believes that Doha Climate Gateway is an important cornerstone in the international climate change diplomacy, which provides some concrete basis on which a future climate regime can be built by 2015.

However, it lacked ambition, mainly on mitigation and finance, and it didn’t provide any substantial assurance that adaptation and loss and damage issues will be enhanced or tackled in an effective manner. Even if some foundation for institutional arrangement to deal with loss and damage has been set up, this is yet to be established.

The adaptation committee has just adopted its work plan. It is still premature to make any judgment and we still need time to see how efficient these institutions will be in providing concrete actions to support the LDCs in adaptation, and loss and damage.

The Group believes that toward the adoption of the future climate change regime, a lot of parallel works are required for the implementation of enhanced mitigation action, scaling up of climate finance for the most vulnerable countries, full operationalization and implementation of actions regarding adaptation, capacity building, technology and other means needed to support climate actions. 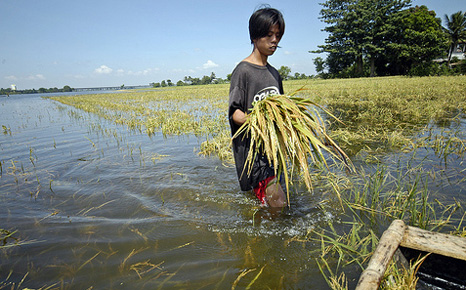 2.  You talked of ‘leadership’ in your latest statement. How do you see this manifesting itself – through policy proposals within the context of the UNFCCC or active efforts to cut emissions domestically?

The LDCs are not among those that have high emissions. So, there is limited mitigation potential that can be achieved in LDCs. However, LDCs welcome support towards low carbon development pathway.

When it comes to climate adaptation we are the leaders and we would like other countries to learn from our experiences to improve global climate actions. Some of our countries have also put in place the necessary institutional arrangements to address climate change. Indeed, there are many lessons to be learned from the LDCs.

3.  Given the current economic crisis do the LDCs acknowledge they need to give ‘developed’ countries more slack when it comes to emission reduction or financial commitments?

We believe that responses to climate change should not be seen as the problem but as a part of the solution. The LDCs acknowledge that the world is facing a severe crisis, which has affected developed countries, but the LDCs are hit even more seriously.

The reality to be considered is that any effort to overcome the crisis that does not integrate effective climate solutions will prove inefficient. The central idea of all studies on the economics of climate change is that delayed actions will cost more tomorrow than today.

Effective and adequate support to deal with mitigation and adaptation to climate change in developing countries, as well as deep cuts in emissions in developed countries must be part of the solutions to the crisis.

These measures are not to be seen as burden only, but the focus should be on the opportunity they can offer to trigger new developments and create jobs and economic value in sectors other than the traditional fossil fuel based sectors.

4. What role do the LDCs see private finance playing in funding future commitments from developed countries?

Reducing emissions and limiting climate change require public finance, and it needs to be scaled-up.

Bearing in mind the limit of public financial mechanisms and funding, there is also a need for innovative sources of finance in order to provide the flow needed for transformation towards low carbon and climate resilient societies.

The LDCs have always stressed that there can be no substitution for public climate finance, but it is fundamental to use public funding to ramp up total finance.

5. Do you think it was a mistake not to invite developing countries to the climate finance ministerial in Washington on April 10-11?

Copenhagen has proven that inclusiveness is essential in the climate change negotiations process.

Representation of 12% of the world’s most vulnerable and poor population would certainly be necessary for exchanging and exploring ideas, and taking decisions related to global issues.

6. What would you and your colleagues like to see in terms of climate ambition ahead of the start of the ADP talks in Bonn?

We would like to start an open ADP negotiation process this year, geared towards progress. Time is running out and there are many complicated issues to deal with.

All Parties agreed in Durban to be part of the process. It is now time for solidarity in crafting innovative and concrete solutions.

Science continues to tell us what we have to do. As science is becoming more certain, our actions should also be equally certain. It is not only vital to come to an agreement by 2015, but also to make substantial progress on pre-2020 ambition.

Failing to do so would have catastrophic consequences for all.