Was climate change one of the causes of the uprisings that swept North Africa and the Middle East since January 2011? 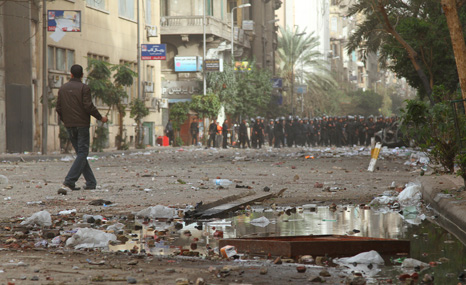 Was climate change one of the causes of the wave of popular protests and uprisings that has swept the Arab countries of North Africa and the Middle East since January 2011?

At first blush, the question might seem absurd. Surely the myriad long- and short-term social, economic, political and religious drivers of anger and dissent are the obvious culprits. How could climate change have had any – let alone a significant or meaningful – impact on the Arab spring?

But in fact, the recent events offer a textbook example of what analysts mean when they talk of complex causality and the role of climate change as a ‘threat multiplier’.

The INUS model of causality – ‘insufficient but necessary to the unnecessary but sufficient’ provides the framework. The wave of protests, feeding on one another, might have broken at any time over the last few decades.

Why did it happen now? Any number of different concatenations of events and circumstances could have been sufficient to set it off; none would have been necessary, because any of the others could also have sufficed.

Within the particular ‘sufficient but unnecessary’ chain of events that did lead to today’s revolutions, climate change played an insufficient but necessary role. One of the proximate factors behind the unrest was a spike in global food crises (see the recent IISS Strategic Comment, ‘Bread and Protests‘), which in turn was due in part to the extreme weather throughout the globe over the past year.

This was not enough to trigger regime change – we have seen food price spikes and food riots before – but it was a necessary part of this particular mix.

With the usual caveat that individual events can never be definitively attributed to climate change, this severe weather is exactly what the science predicts will occur with increasing frequency as the world warms.

Climate change and its impact on weather are of course insufficient on their own to ’cause’ conflict, let alone on the scale now occurring in the Arab world. But it has been a threat multiplier, as suggested in numerous reports and policy documents (including last year’s US Quadrennial Defense Review), in the sense that it was a necessary component of any number of possible scenarios, each of them sufficient to have led to the sort of unrest we are witnessing.

Although many other possible pathways not involving climate change could have led to the same end, by increasing the number of sufficient paths, climate change increased the likelihood of that outcome – it multiplied the threat.

Regardless of the merits of democratisation, whether through reform or, in some cases, removal of despots by coercion or force, the resulting instability is still a problem for nations with interests in the region.

This also illustrates the difficulty of translating the concept of climate change as a threat multiplier into concrete policy advice.

The very complexity and multiplicity of possible paths, of which climate change is but a small part, makes prediction impossible. Any role of climate change in particular events can only be discerned after the fact. Nor can its increased contribution to threats be quantified.

The resources that states outside the region might need to draw on, whether for evacuation of nationals caught in the crossfire, military intervention, humanitarian assistance or political and diplomatic capital – time and attention at the expense of other interests – is not negligible.

If climate change does increase the probability that events such as those we are seeing in the Middle East and North Africa will happen elsewhere in the world, the call on such resources and capabilities will also increase, and planning priorities and the mix of necessary capabilities may change.

This – and not in the identification of particular instability hot-spots – is where projections of climate change can meaningfully inform defence and security policy.

By Dr Jeffrey Mazo, IISS Research Fellow for Environmental Security and Science Policy; Managing Editor, Survival. This article originally appeared in IISS Voices and an in-depth version was published in the April-May 2011 edition of Survival.