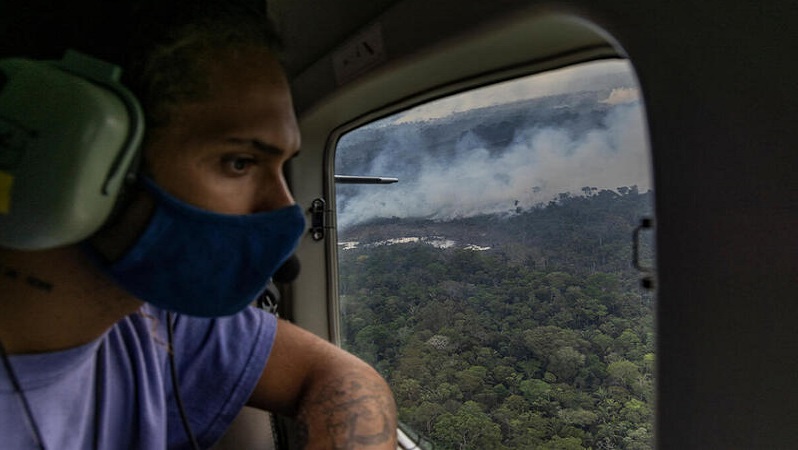 The Brazilian people elected Luiz Inácio “Lula” da Silva to be their next president on Sunday, rejecting the far-right incumbent Jair Bolsonaro.

The vote has raised environmentalists’ hopes that the Amazon rainforest will be protected from ranchers, illegal loggers and gold miners.

Deforestation speeds up climate change as the trees and soil, particularly in untouched rainforest, suck in carbon dioxide.

“For climate, [Lula’s election] is a huge hope,” Lula’s environmental advisor and former environment minister Izabella Teixeira told Climate Home News. She said that climate action and “a new relationship between humankind and nature” are critical to Brazil’s economic development.

“We know that we need to work hard but [we] now have a president that believes and is committed not only to tackle deforestation but to move forward to make sure that [we] can promote inclusive development,” she added.

In his victory speech, Lula pledged to reduce the level of forest destruction in the Brazilian Amazon to zero. According to another former environment minister Marina Silva, Lula’s administration will turn areas of the Amazon the size of France into indigenous or nature reserves. This would introduce harsher penalties for illegal deforestation in these areas.

But Amazon campaigners warned that right-wing control of Congress and the “inertia” of rising deforestation would make this target hard to achieve.

Claudio Angelo, a spokesperson for NGO Climate Observatory, told Climate Home that right-wing forces in Congress were likely to continue to support Bolsonaro until Lula takes office on 1 January. That means lawmakers will try to pass 14 bills to further weaken environmental regulations and indigenous rights before Lula takes over.

That would “make it very, very hard for Lula to rein in deforestation, pollution and stop the massacre of indigenous peoples,” Angelo warned.

“We call those bills the ‘destruction package’ and they include permanent amnesty to land-grabbing, mining in indigenous lands and the end of environmental impact assessments,” he said.

More than 90% of deforestation in Brazil’s Amazon is illegal. Government agencies like Ibama are tasked with stopping it. But Bolsonaro appointed people to head the agency who refused to spend most of its budget and restricted what its employees could do.

Over the last four years, Ibama had a large budget. But Bolsonaro-appointed officials just weren’t willing to spend it on inspections and enforcement, Angelo said.

Lula’s appointees are likely to spend it in full. And Congress members associated with the centre-right Centrão coalition, which votes with whoever is in power, could even support a request to increase Ibama’s budget, Angelo said.

Environmental protection could also be funded from abroad. Until Bolsonaro came to power, Norway and Germany funded Amazon protection through the Amazon Fund. Teixeira told Climate Home the fund “will be crucial to [finance] environmental enforcement”.

In 2019, Bolsonaro abolished the fund’s technical committee and in response Norway stopped its donations. The fund has not launched a new project since Bolsonaro became president.

President-elect @Lulaoficial championed the protection of the Amazon and its people throughout his campaign as well as in his acceptance speech. Norway looks forward to revitalizing our extensive climate and forest partnership with Brazil. 🇧🇷🇳🇴@climateforest

André Guimarães, director of the Amazon Environmental Research Institute (Ipam), told Climate Home that “inertia” was another challenge. “That land-grabbing that took place over the last two or three years will be generating deforestation… in the next few years,” he said.

Internationally, Lula’s administration plans to work with its Amazon neighbours by organising a summit on forest protection in early 2023. And it intends to work with the Democratic Republic of Congo and Indonesia in an alliance of rainforest nations at Cop27 next week.

Lula’s government will update the “insufficient” 2030 climate plan that Bolsonaro put together, Teixeira previously told Climate Home. On Monday, she said: “It takes time to review and develop new deals and visions.”

Lula plans to encourage state oil company Petrobras to diversify into renewables, fertilisers and biofuels. But, he said, Petrobras should expand oil production in the short term.

Bolsonaro, who has yet to accept defeat, has for months attempted to undermine the legitimacy of Brazil’s electoral system. His loss was much narrower than polls had initially forecast and there are concerns he could challenge the results.