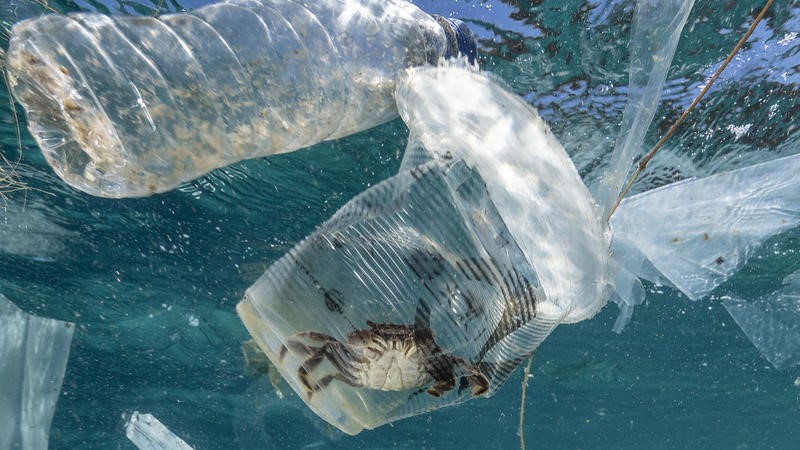 A crab trapped inside a discarded plastic cup in Verde Island Passage, a haven of marine biodiversity, in Batangas City, the Philippines (Photo: Noel Guevara / Greenpeace)

Heads of government haven’t been invited to attend an important biodiversity summit in Canada, raising concerns nature is slipping down the global agenda amid fraught geopolitical relations.

The biodiversity conference, or Cop15, is a moment for countries to agree on a global framework to halt the destruction of nature by the end of this decade. Negotiators meet in Montreal, Canada, 7-19 December, to finalise the deal, widely billed as the “Paris Agreement for nature”.

But after four years of talks, the issue has failed to gain the attention of world leaders. First the coronavirus pandemic, then Russia’s invasion of Ukraine and soaring inflation pushed nature conservation down the agenda.

That is unlikely to change as China, which presides over the talks, hasn’t invited political leaders to attend the conference. President Xi Jinping isn’t expected to show up amid deteriorating relations with host Canada.

“As the plans go, we may not have the heads of state and government,” Elizabeth Maruma Mrema, head of UN Biodiversity, told Climate Home News during an event at think tank Chatham House in London.

But “pressure from many quarters” is building on China and Canada to reconsider, she added.

Campaigners have warned that without political leadership, the talks risk collapsing with no deal.

The draft deal outlines 21 targets but nearly all the text remains disputed. The version dated 26 June has more than 900 pairs of square brackets, enclosing proposed language that hasn’t got consensus.

China officially presides over the negotiations but handed over the hosting to Canada because of Beijing’s zero-Covid policy. The invitation list is officially China’s call.

Relations between the two countries have been fraught ever since Canadian authorities arrested Huawei executive Meng Wanzhou in 2018, at the request of the US, for allegedly violating sanctions against Iran.

Days later, China arrested two Canadian nationals on accusations of spying. The detainees on both sides were allowed to return home in September 2021 but tensions remain high.

A spokesperson for the Canadian government didn’t address Climate Home’s question on whether world leaders would be invited.

Campaigners are urging Canadian prime minister Justin Trudeau to gather leaders on the sidelines of the summit, regardless of what China decides.

“Trudeau cannot and should not allow a global political failure of these negotiations in his own watch and in his own country,” Oscar Soria, Avaaz’s campaign director, told Climate Home

“Right now, this conference is barely known in certain diplomatic circles and despite some isolated announcements in the last UN general assembly, the overall process is lacking momentum,” he said. Without “the highest political attention,” the summit risked being further overshadowed by the war in Ukraine and even the football World Cup.

“Biodiversity cannot be an afterthought, it cannot be a low-priority issues. Nature is the foundation of our economy, our food, and our survival,” Brian O’Donnell, director of the Campaign for Nature, told Climate Home.

By attending Cop15, heads of state will “significantly improve the likelihood an ambitious global agreement can be reached,” he said.

Last month, the Chinese government invited ministers to attend the high-level segment at the end of the summit on 15-17 December.

While negotiators lay the technical groundwork, political agreement between capitals is what gets these deals over the line.

In a note to governments, Mrema said participation in the high-level segment was “of vital importance to secure an ambitious and achievable post-2020 global biodiversity framework” and urged ministers to attend in person.

The Chinese Cop15 presidency didn’t respond to a request for comment.