In July, Barbados’ prime minister invited leaders to a retreat to discuss plans to scale-up international finance for the climate frontlines. Now, she’s asking the world for support 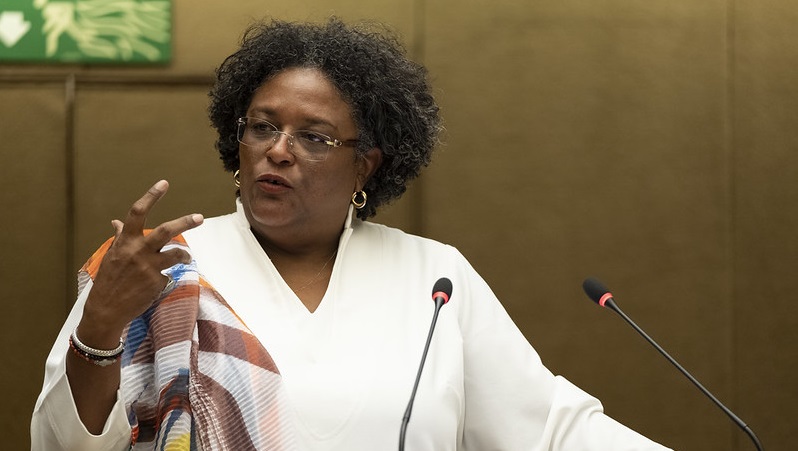 Barbados’ prime minister Mia Mottley is building a global coalition of nations committed to overhaul the financial system and unleash trillions of dollars of investments to the climate frontlines.

The leader of one of the world’s smallest nations is working to deliver a new global finance compact for vulnerable countries trapped between financial stress and the inability to prepare for the next climate disaster.

Addressing the UN general assembly on Thursday, Mottley laid out a plan to transform the global finance architecture and make it fit to address the climate crisis. This is neither “idle thought or arbitrary comment on our part,” Mottley told the plenary hall in New York.

In fact, many in the room would have been familiar with what she is proposing. At the end of July, Mottley hosted a retreat in Barbados’s capital Bridgetown to brainstorm solutions and test her ideas.

The outcome was the ‘Bridgetown Agenda’ – a set of core messages designed to reform the World Bank and the International Monetary Fund (IMF), institutions set-up at the end of World War II and still dominated by the US and Europe.

Since then, Mottley has embarked on a diplomatic drive to gather support for the movement for reform she began in Bridgetown.

Last week, she travelled to the White House to present the plan to US vice president Kamala Harris. Climate Home News understands that Harris was receptive to some of the ideas.

Today, I met with @VP Kamala Harris, Heads of CARICOM and President of the Dominican Republic Luis Abinader, to discuss and help accelerate the implementation of PACC 2030. Thank you to all. We must continue making the right decisions today, for the sake of our world tomorrow. pic.twitter.com/EYR4BZAtwW

On the sidelines of the UN general assembly in New York on Wednesday, Mottley presented her case at a leaders’ roundtable on climate action organised by the UN.

The meeting was poorly attended by leaders. There were no heads of governments or delegation from wealthy nations. Instead, representatives for the EU Commission and the US attended. But IMF head Kristalina Georgieva was in the room.

“We can’t pretend day by day that someone somewhere else is going to make that change. This is our time to make that defining difference,” she later told the UN plenary hall.

“And many of the things that are put before us today don’t require money, but they require a commitment and they require political will.”

The plan for reform is based around a new form of internationalism which seeks solutions that transcend national borders, Avinash Persaud, one of Mottley’s closest advisors and the brain behind many of the proposals, told Climate Home.

For Mottley and her team, the financial system is failing to provide developing countries with the funds necessary to invest in resilience, address climate change and meet development goals at a time when vulnerable nations are facing soaring debt levels.

Almost 60% of the world’s lowest-income countries were already in debt distress or at high risk of it before the start of Russia’s war in Ukraine, according to the World Bank. Rising costs have made things worse.

Persaud has warned that “a silent wave of financial stress is running through world markets and will soon crash onshore” with widespread consequences.

Meanwhile, climate vulnerable nations from Pakistan to Puerto Rico are facing growing costs to recover from climate disaster and prepare for the next one.

“In order for us to get away from that, we need to secure long-term funding. This must now be the global movement of our time,” Mottley told an event in New York organised by the Bill & Melinda Gates Foundation.

Mottley launched the ‘Bridgetown Agenda’ on Friday, as she delivered the inaugural Kofi Annan lecture in New York.

The agenda is based around a three-pronged approach.

The first step is to prevent a debt crisis with emergency IMF relief and long-term concessional funding for development, lent over at least 30 years, to prepare for the future.

Money should be available not just “following a disaster, but before a disaster,” she said, citing World Bank research that for every $1 spent on resilience, many lives and $7 could be saved in avoided costs.

This, she said, calls for a greater redistribution of special drawing rights (SDRs), the IMF reserve asset issued as relief during the pandemic, from wealthy nations to those that need it most.

Last year, the IMF injected $650bn in SDRs into the global economy to help countries recover from the Covid-19 pandemic. The IMF created a $45 billion Resilience and Sustainability Trust for rich nations, which received most of the support, to re-channel the funds to developing countries.

Mottley and her supporters are asking for at least $100bn to be redistributed.

The second step is to expand the lending capacity of multilateral development banks to developing nations by $1 trillion to be invested in climate resilience. This includes by allowing the banks to hold SDRs for lending.

The third step is to develop long-term instruments that can mobilise $3-4 trillion in finance for carbon-cutting projects and a mechanism for raising reconstruction grants to help nations rebuild after climate disasters.

Part of the money could come from the IMF agreeing to a new issuance of $650bn in SDRs – a threshold that doesn’t require approval by US Congress.

The next push for Mottley will be the annual meetings of the IMF and the World Bank, which start next month.

As the largest shareholder in both institutions, the US government would need to be on board.

UN chief António Guterres has made clear he backs Mottley’s agenda. Speaking to the press on Wednesday, he called on Washington to “get behind these ideas now”.