The Cop27 host is pitching for $11.4bn in investment as part of a push with the UN to match bankable climate projects with private funders 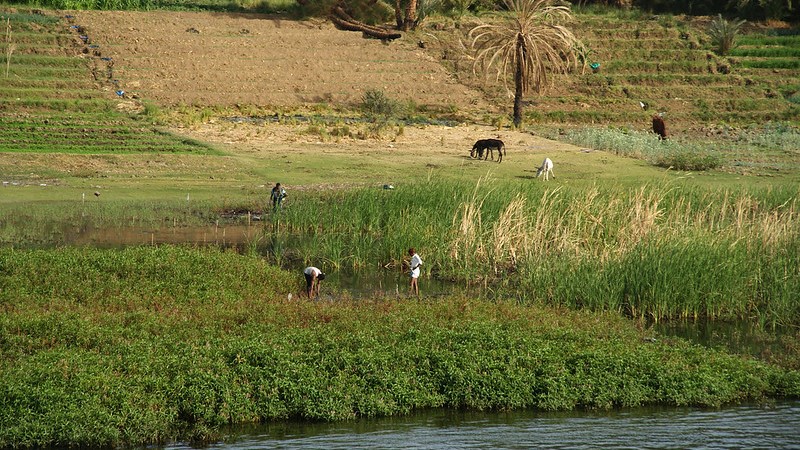 Egyptian farmers on the banks of the Nile (Photo: Tim Dawson/Flickr)

Egypt has made a large bid for investments in a list of African climate projects ready to be matched with international funding that will be showcased at the Cop27 climate summit in Sharm el-Sheikh.

In an effort to push for the implementation of the Paris Agreement, the Cop27 host is seeking to turbocharge climate investments from the private sector into emerging markets and developing countries.

Together with UN regional commissioners and the high-level climate champions Nigel Topping and Mahmoud Mohieldin, the Egyptian Cop27 presidency has organised five regional roundtables with financiers to match bankable carbon-cutting and adaptation projects with funders. This includes the Glasgow Financial Alliance for Net Zero, a coalition of financial institutions committed to accelerate the decarbonisation of the economy.

The first of these meetings took place at the UN Economic Commission for Africa in Addis Ababa, Ethiopia, this week.

Among a pool of more than 140 projects being considered, an initial list of 19 African projects were showcased as “good examples” of projects that are ready to be implemented and scaled up and could receive funding. More projects are expected to make it on to the list in the coming months.

Egypt is the host country of four projects costing an estimated $17.4 billion – about 40% of the combined cost of the projects on the list. With some funding already secured, it is pitching for $11.4bn in new investments.

Egypt is pitching for $10bn – the highest cost of any project on the initial list – to replace 17 inefficient fossil fuel power plants, which have a combined capacity of 7.5GW, with 11.3GW of wind and solar power.

The project, which is to be delivered by the private sector, would help Egypt meet its 2030 emissions reduction goal.

The construction of two electric light rail lines costing $6bn was also showcased. One line would link the country’s new administrative capital in the desert to a subway station near Cairo International Airport. The other is from Abu Qir to Port Saeed West, both on the Mediterranean coast. Egypt argues the project will displace polluting vehicles and buses, reduce greenhouse gas emissions and help tackle air pollution.

The government of Abdel Fattah el-Sisi is further pitching for investments for two adaptation projects. It is seeking finance for an $800m project to increase the resilience of crop production in the Nile valley and delta and $600m to build six desalination plants, powered by solar energy, to reduce dependence on freshwater supplies from the Nile.

Climate change and population growth is putting pressure on increasingly scarce water resources and by 2050, the government expects Egypt to come close to the severe water scarcity threshold.

Jean-Paul Adam, director of the climate change division at the UN Economic Commission for Africa, which co-hosted the meeting, explained that the list of projects was not final but represented examples of projects which may be attractive to private financiers.

The aim is to create a methodology that facilitates linking climate projects with finance and there is no limit to the number of additional projects that can be part of this process in the run-up to Cop27, he said.

“The Egypt presidency has led the ‘focus on implementation’ and has been very proactive in encouraging the development of projects which contribute significantly to climate goals,” Adam told Climate Home News.  “The capacity they have built in this process means that the projects they have proposed are of high quality.”

“The goal is to build on positive examples to generate further interest in investment in climate resilience. We will expect that further momentum will be built around projects presented from all African countries leading to Cop27,” he added.

Faten Aggad, a senior advisor on climate diplomacy and geopolitics for the African Climate Foundation, told Climate Home that the initiative demonstrated that a pipeline of ready-to-be-funded climate projects exists.

“The challenge remains in matching it with funding, especially in the case of adaptation finance,” said Aggad. “This will require major action backed by public funding to de-risk investments in order to reassure and attract investments… that is the weak link”.