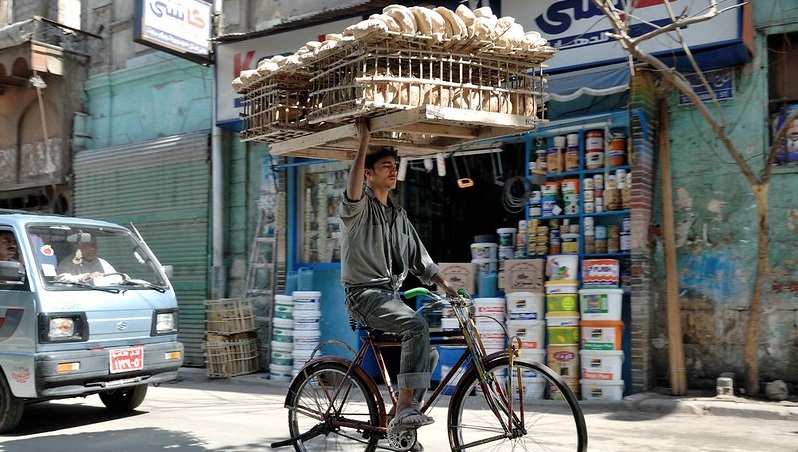 A man carries baskets of bread on his head through Cairo, Egypt (Photo: MM/Flickr)

Soaring food and fuel prices, an economic downturn and ballooning debt will restrict Egypt’s investment in climate action, the host of the next UN climate summit has said in its updated climate plan.

The Egyptian government submitted its long-awaited 2030 climate plan to the UN this week, four months before welcoming delegates to Cop27 in the Red Sea resort of Sharm el-Sheikh.

After weathering the worst impacts of the pandemic, the nation of 102 million was hit hard by disruption to wheat imports from Ukraine since Russia’s invasion.

With inflationary pressures compounding a slow Covid-19 recovery, growth declined while Egypt’s foreign debt rose to “an alarming” $145.5bn and is expected to consume almost 45% of the country’s revenues this financial year.

The plan is an improvement on Egypt’s previous one, which didn’t commit to any emission reduction targets.

While the latest version doesn’t include an economy-wide carbon-cutting target, it introduces quantified emission goals for the electricity generation, transport and oil and gas sectors. On adaptation, water management and irrigation measures are planned to counter water shortages and address the Nile’s expected changing water flows.

The largest emissions cuts are to come from the power sector, which is most responsible for driving the country’s emissions. Egypt plans to cut emissions 33% by 2030 compared to business as usual.

To do this, Egypt wants to reach 42% of renewables in the power generation mix by 2035, reduce coal capacity and replace inefficient thermal power plants.

The transport sector offers the second largest mitigation potential. Egypt plans a 7% decrease in emissions by 2030 compared to business as usual and is encouraging a shift away from private cars to mass transit by expanding the Cairo metro and the national rail network.

The plan includes the construction of at least 7,000 km of new roads, which the government says will reduce commuting time between cities and therefore fuel consumption. Generally, the evidence suggests that increasing road capacity attracts more traffic.

An objective to cut emissions in the oil and gas sector by 65% by 2030 hinges on the deployment of energy efficiency measures and technologies, with no plans to reduce production. Producing gas from petroleum extraction instead of flaring is among proposed measures. 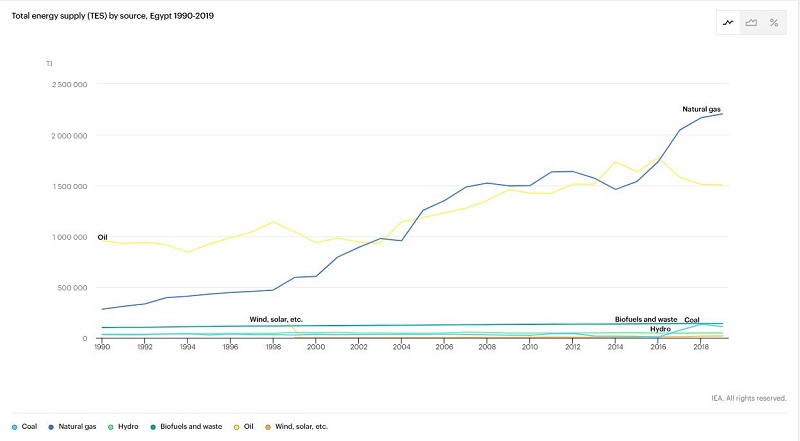 Egypt gets most of its energy from fossil gas and oil (Source: IEA)

The update does not align Egypt’s decarbonisation pathway with the Paris Agreement.

Analysis by Climate Analytics found that to be compatible with the most ambitious Paris goal to limit global heating to 1.5C, Egypt would need to peak its emissions immediately and reduce them 22% below 2015 levels by 2030.

Egypt expects its renewable capacity to reach around 40% of the power mix by 2030. That number should be at least 77% in a 1.5C scenario, on a path to zero-emission electricity in the 2030s.

Egypt has further embraced gas as a “transition fuel”. It is responsible for over a third of total fossil gas consumption in Africa, and is the continent’s second largest gas producer.

In recent months, the government has courted oil and gas companies for new exploitation deals, announced record high investment in the sector and struck a gas supply deal with the EU.

The increased gas production prompted Climate Action Tracker to rank the country’s policies and action in June as “insufficient” to limit warming well below 2C. It has yet to publish a verdict on the latest targets.

About 95% of the country’s population lives in the Nile valley and delta, placing considerable pressure on water resources. Climate change and a growing population is exacerbating water stress and by 2050, the government expects Egypt to come close to the severe water scarcity threshold.

Faced with increased demand for drinking water, Egypt is planning to develop water desalination projects. Increasing the efficiency of water use in the agriculture sector and changing crop patterns to less water-hungry species is part of a plan to better manage its water consumption. Further work is planned to protect catchments for rainwater from flash floods and sea level rise.

These climate policies are to be coupled with “pro-poor economic growth” and the strengthening of social safety nets to protect the most vulnerable.