An adaptation levy on carbon credits could raise up to $2.5bn a year by 2030, providing more predictable support for climate vulnerable countries 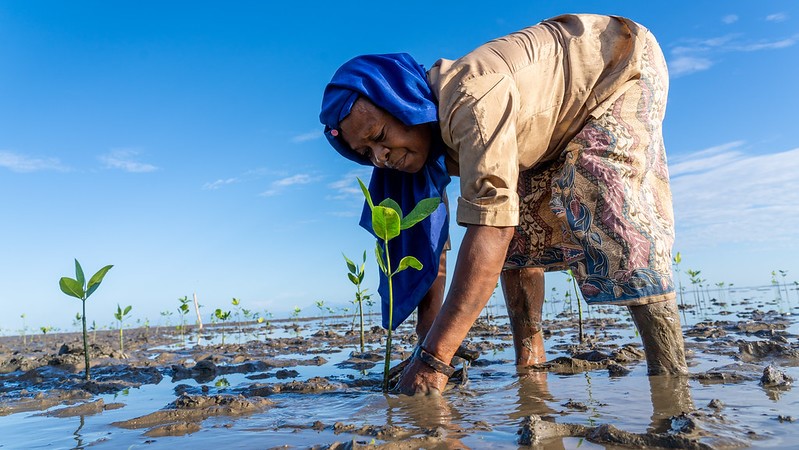 Corporate polluters could be encouraged to contribute to adaptation finance when they buy carbon offsets, under proposals to boost the integrity of carbon trading.

The Integrity Council of the Voluntary Carbon Market, one of two bodies set up to address greenwashing concerns, launched a 60-day consultation on Wednesday to define “core carbon principles” for high quality carbon credits.

One of the proposed principles is to align with the Paris Agreement, including by levying a share of the proceeds of selling carbon credits to help vulnerable communities adapt to the impacts of climate change. Others seek to ensure robust carbon accounting and human rights safeguards. Buyers could burnish their climate credentials by choosing credits that meet these standards.

Ousmane Fall Sarr, a carbon market negotiator for Senegal who heads the West African Alliance on Carbon Markets, told Climate Home News it would be “a very big step forward” for the proposals to be endorsed by market stakeholders. “A very clear signal has not yet been sent to developing countries in terms of mobilising adaptation funding,” he said.

Money for climate vulnerable nations to cope with intensifying impacts persistently lags behind finance for cutting emissions, only accounting for around a third of international climate finance.

The value of the voluntary carbon market exceeded $1 billion in 2021 and is projected to grow to $30-50bn in 2030, as big businesses increasingly look to offsets to meet net zero targets. On that basis, a 5% levy on all transactions could deliver up to $2.5bn a year for adaptation by the end of the decade.

There is a precedent. One of the most predictable sources of adaptation finance used to be a 2% levy on revenues from the Clean Development Mechanism (CDM), the UN’s offsetting scheme established under the Kyoto Protocol to allow rich countries to meet their climate obligations by funding carbon-cutting projects in developing ones.

While the CDM market crashed in 2012 and the Kyoto Protocol was superseded by the Paris Agreement in 2015, this levy still makes a significant contribution to the Adaptation Fund. As of June 2021, 19% of the resources pledged to the fund, or more than $200m, came from the sale of CDM credits, according to its latest financial report.

Efforts by developing countries to replicate this adaptation levy under the new carbon market rules of the Paris Agreement were partly successful.

Countries agreed that a 5% share of proceeds from transactions under a new centralised carbon market would go to the Adaptation Fund, but the same doesn’t apply for bilateral trading. The African Group, which strongly pushed for more more predictable sources of adaptation finance, had to settle for assurances of voluntary contributions.

“It would be very relevant if the voluntary carbon market can be used as a vehicle for collecting this share of proceeds that will contribute a lot of financing to adaptation,” said Sarr.

The proposal in the consultation doesn’t specify the percentage of revenues that could be earmarked for the Adaptation Fund.

Developing countries had lobbied the council to include the proposal in the consultation document, arguing that the 5% levy for the new Paris carbon market was “a hard-fought win“.

It “would allow the voluntary carbon market to provide adaptation benefits in an equitable manner… which would not only benefit our countries, but also put the [market]  in the vanguard of progressive instruments to tackle the climate emergency,” Abul Kalam Azad, Bangladesh’s special envoy for the Climate Vulnerable Forum, Madeleine Diouf Sarr, of Senegal, chair of the least developed countries group and Sarr of the West African Alliance on Carbon Markets wrote in a letter to the council’s board.

“We need to see the standards the world’s governments set for international carbon markets in Glasgow become widely and consistently applied, including in the voluntary carbon market. For those of us representing the world’s most vulnerable populations, the increased mitigation ambition and funding for adaptation this will generate is absolutely vital.”

This article was updated on 27 July 2022 to clarify that the principles are just proposals and are subject to consultation.