AGL had planned to split in two and keep burning coal for another two decades or more, before Mike Cannon-Brookes led a shareholder revolt 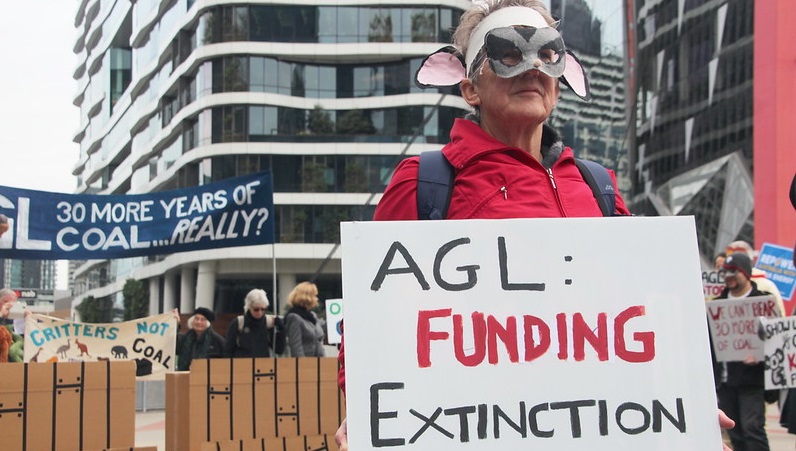 Protesters against AGL outside their Melbourne headquarters (Photo: John Englart/Flickr)

This is probably the biggest story yet in Australia’s still fledgling green energy transition.

AGL, the country’s biggest coal generator and biggest polluter, has been forced to abandon its ill-considered plans to split in two and keep burning coal for another two decades and more. And it has been forced to do so by shareholder activism.

The fact that coal has been such a touch pad of political debate in the past decade makes this stunning victory by the activist billionaire Mike Cannon-Brookes even more remarkable.

For one, it shows that resistance to the green energy transition and science-based climate targets is moving from dodgy back-room political deals and street-based protests, to the plain daylight of the boardroom and financial markets.

It also has a super industry with trillions of dollars of investment to manage, and a keen awareness that fossil fuel assets are going to be stranded and worthless within a decade or two. The shift is on.

Comment: Europe should use its Putin-proofing energy plans to reinvigorate climate action

Cannon-Brookes and Forrest are already working together on what will be the world’s biggest solar plant and battery storage facility, the $30 billion Sun Cable project in the Northern Territory. And they are both damning in their assessment of those who propose new fossil fuel projects.

Yes, we still have conservative politicians, media and “think tanks”, cheered on by Australia’s richest person Gina Rinehart from the sidelines, still prosecuting the case for coal, and smearing their faces in coal dust, feigning interest in the future of the coal industry workers.

But the federal election, barely a week old, amplifies the green energy shift. At least 55% of people voted for stronger climate action, and at least one quarter for a lot more than that – the supporters of the Teals and the Greens demand science-based targets, and to act on them.

It’s likely that AGL saw the writing on the wall from the election result, and realised it was kidding itself if it thought it could keep on burning brown coal up to 2045 and retain customers at the same time.

The existing board – many gas and oil veterans – doesn’t seem interested in managing an accelerated transition, so they are heading for the exit.

There are still many big questions to be answered about how this plays out, mostly relating to the speed and extent of the transition that AGL will be able to execute.

The Australian Energy Market Operator has outlined a 20 year blueprint that factors in 80% renewables by 2030, no brown coal generators by 2032, and very few black coal generators by that time. It is very likely to accelerate that scenario in coming years, possibly to a complete exit from coal by 2035, or earlier.

But it is one thing to model this path, and another to execute. So much depends on the rules and the regulations of the market – which everyone knows are not fit for purpose, but which are taking an age to re-write. And there are other important issues, including technology integration, social licence for new projects, and transmission in particular, and of course supply chains.

David Leitch, principal of ITK and co-host of RenewEconomy’s popular Energy Insiders podcast, says the change of management at AGL will be welcomed.

He believes that AGL may try and seek a negotiated bid from Grok Ventures, the Cannon-Brookes investment vehicle. It will be interesting to see whether funds management giant Brookfield rejoins Grok in such a venture and a joint bid.

Much about the future of AGL’s Loy Yang A brown coal generator, Leitch says, will depend on the attitude of the Victorian government, which has already privately negotiated a new closure date for the Yallourn brown coal generator in the Latrobe Valley, the details of which have been kept secret.

Yallourn was originally scheduled to close in 2032, and it will now close in 2028. It is possible it might have closed even earlier without a state government agreement to support it in troubled times, and when the sun did shine and the wind did blow, but we don’t know.

This is the big question for the green energy transition. We do know, from experience from the sudden exit of Hazelwood, and the drawn out saga over Liddell, that coal closures must be preceded by a sufficient amount of wind, solar and dispatchable storage built beforehand. That’s easier said than done.

NSW has implemented a plan to do just that, while assuming that all its remaining five coal generators could be gone within a decade. Victoria has a less well-defined plan, but its second big renewables option this year and its big new push into offshore wind shows that it knows it must build before it closes.

As it stands, only the Labor governments in Queensland, Western Australia and the Northern Territory do not have credible plans to move beyond 50% renewables in their respective grids, or even reach that target. It is possible that the massive push into green hydrogen could solve the problem for them, but they need a transition plan for their existing workers.

Cannon-Brookes, meanwhile, can help prepare AGL for the green energy transition, but he will need to work with and count on others – regulators, rule makers, developers, suppliers, financiers, state and federal governments – to ensure the infrastructure is in place to meet those climate targets.

But that is what is so exciting about the AGL situation. The transition has claimed nearly as many AGL CEOs (Andy Vesey, Brett Redman and now Graeme Hunt), as it has claimed Australian prime ministers (Rudd, Gillard, Abbott, Turnbull and Morrison).

Now, however, we have a federal government with a more ambitious policy (43% emissions reduction and 82% renewables by 2030), and a very big cross-bench in both houses that will be pushing them to do much more, especially on economy-wide emissions. And a public that wants change and is cheering it on.

This article was produced by RenewEconomy and republished under a content-sharing agreement.