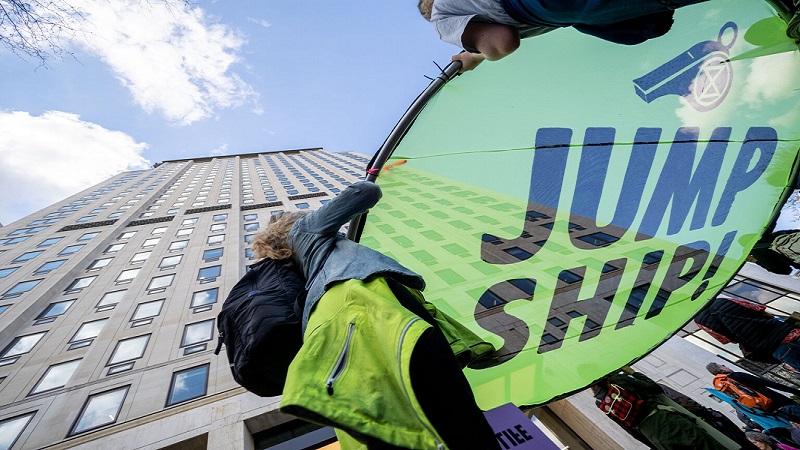 A safety consultant has vowed to stop working for Shell after 11 years because of its investments in new oil and gas production, in a first victory for Extinction Rebellion’s (XR) “jump ship” campaign.

In an email to over 1,000 Shell employees and directors, Caroline Dennett said she could no longer have Shell as a client because it “is not winding down oil and gas, but planning to explore and extract much more”.

“It pains me to end this working relationship which I have greatly valued, but I can no longer work for a company that ignores all the alarms and dismisses the risks of climate change and ecological collapse,” she wrote in her email on Monday morning.

Her resignation came the day before Shell’s annual general meeting, where the oil major is resisting calls by a shareholder activist group to align its activities with the targets of the Paris Agreement. If adopted, the resolution would result in “unrealistic interim targets”, company directors argued.

Analysis: Who will replace Patricia Espinosa as the UN climate chief?

Dennett told Climate Home News that she had started working with Shell shortly after the Deepwater Horizon disaster. While she was uncomfortable, she reasoned that her job was to prevent those kind of disasters.

She became more uncomfortable when she was tasked to work on new production projects in Nigeria.

“I just thought ‘this is not transitioning'”, she told Climate Home. “Supporting a company to continue to operate safely while they transition to hopefully renewables, that’s one thing. But to support new extraction projects, that’s another thing.”

Last month, XR campaigners demonstrated inside and outside Shell’s London headquarters. Their posters had the first names of individual Shell staff members on and invited them to “switch to the right side of history, before Shell turns toxic on your CV”.

They offered to fund career coaching to anyone thinking of making the leap.

Dennett saw a video of this action online. She went on XR’s TruthTeller.Life website and messaged a dedicated number using secure messaging app Signal. The message was picked up by Zoe Blackler, an investigative journalist and the TruthTeller project coordinator.

After phone calls, Dennett travelled from Dorset to London to meet Blackler in person and the two planned how Dennett would cut ties with Shell.

A screenshot of her resignation email was distributed to the press and she explained her decision in a LinkedIn post with video, where more than 2,000 people reacted positively.

While Dennett’s safety consulting firm has other clients, she says Shell is a “significant” one and she is sacrificing revenue for her firm.

“Thats a sacrifice that’s definitely worth making”, she said, while accepting that not every fossil fuel worker is in the position to quit.

How to be a responsible employee of an oil major. pic.twitter.com/p9dW6pQxo4

Blackler said she couldn’t discuss whether any other fossil fuel workers had got in touch but “we are very much hoping that this is the beginning of more to come”.

Under its climate strategy, Shell plans to decrease oil production 1-2% a year on a path to net zero (with caveats) by 2050. It claims its wells have a natural decline rate of 5% so it can reduce production while opening new projects.

Dennett said that 1-2% a year is not enough. “We’ll overshoot any [of the] global heating predictions that the IPCC [scientists] say we mustn’t overshoot,” she said. “We don’t have 50 to 100 years to decarbonise our energy infrastructure”.

Dennett pointed to the International Energy Agency’s finding that, if the world is to limit warming to 1.5C, then there must be no new oil and gas production.

She also cited the United Nations Secretary General Antonio Guterres. Last month, he said: “Climate activists are sometimes depicted as dangerous radicals. But the truly dangerous radicals are the countries that are increasing the production of fossil fuels.”

Asked to comment on Dennett’s resignation, a Shell spokesperson said: “Be in no doubt, we are determined to deliver on our global strategy to be a net zero company by 2050 and thousands of our people are working hard to achieve this.”

They added: “We have set targets for the short, medium and long term, and have every intention of hitting them. We’re already investing billions of dollars in low-carbon energy, although the world will still need oil and gas for decades to come in sectors that can’t be easily decarbonised.”