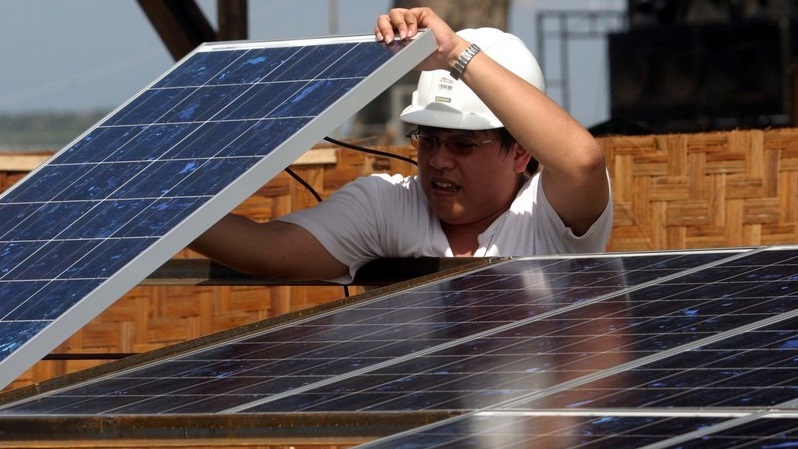 Wealthy countries are discussing part-funding a transition from coal to renewables in Indonesia and Vietnam, Cop26 president Alok Sharma has hinted.

The UK, France, Germany, US and EU announced an $8.5 billion partnership with South Africa in November, under which they invest in renewable energy, electric vehicles and green hydrogen. It targets economic regeneration of coal mining areas to provide green jobs.

Details are still being negotiated, with South Africa pushing for a high proportion of grants or loans on good terms rather than commercial arrangements.

Asked if there were any more of these “just energy transition” deals planned, Sharma told a press briefing on Monday: “In terms of countries that we’re looking at… I’ve recently been to Indonesia and Vietnam.”

Sharma visited Vietnam’s capital Hanoi in February along with Cop26 envoy John Murton, who led talks with South Africa. In the same week, the two travelled to Indonesia’s capital Jakarta.

On Monday I was in #Hanoi with @AlokSharma_RDG. It was inspiring to talk with policymakers fully committed to delivering #Vietnam’s 🇻🇳 2050 net zero target: genuine ambition from an emerging economy determined to harness the benefits of the #lowcarboneconomy pic.twitter.com/179Ru2KYPl

Next up: Meeting Energy Minister Arifin Tasrif @KementerianESDM #EnergyTransition is at the heart of both our 🇩🇪🇮🇩G-Presidencies. Let’s work together to accelerate the clean, sustainable & affordable #renewable expansion and to jointly shift away from #fossilfuels! pic.twitter.com/8pImSFiJCG

Esther Tamara, a researcher at the Foreign Policy Community of Indonesia, told Climate Home: “Indonesia is absolutely interested in getting this type of funding. On of the three key priorities of its G20 presidency is energy transition.”

But Elrika Hamdi, an Indonesian researcher at the Institute for Energy Economics and Financial Analysis said that there were “mixed signals” from the government.

On the one hand, sources of funding for coal are drying up, she said, while Indonesia has a huge untapped resource of renewable energy and particularly solar. 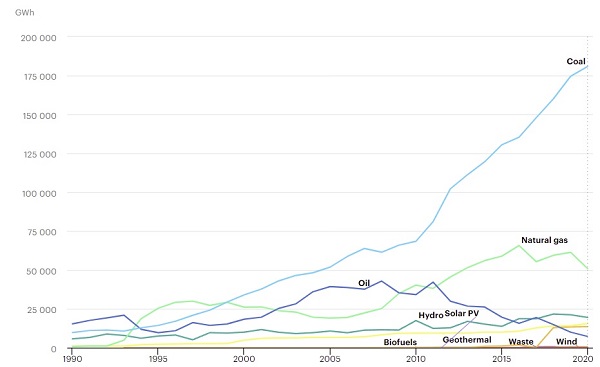 Indonesia’s use of coal for electricity generation has been rising rapidly (Chart: IEA)

On the other, she said “Indonesia relies a lot on revenues from coal export” particularly now the price of coal has jumped in the wake of Russia’s invasion of Ukraine.

Indonesia is the second biggest coal producer in the world by energy value and its coal industry is politically powerful. President Joko Widodo’s right-hand man on climate is minister for maritime affairs and investment Luhut Pandjaitan, an ex-general and coal mine owner.

The government plans to keep increasing the amount of coal it uses for primary energy until at least 2050.

Hamdi said that shutting down coal-fired power plants early would cost billions of dollars and that, while the Indonesian government might spend some money on this it would not be enough. “So we need foreign capital to come in,” she said. 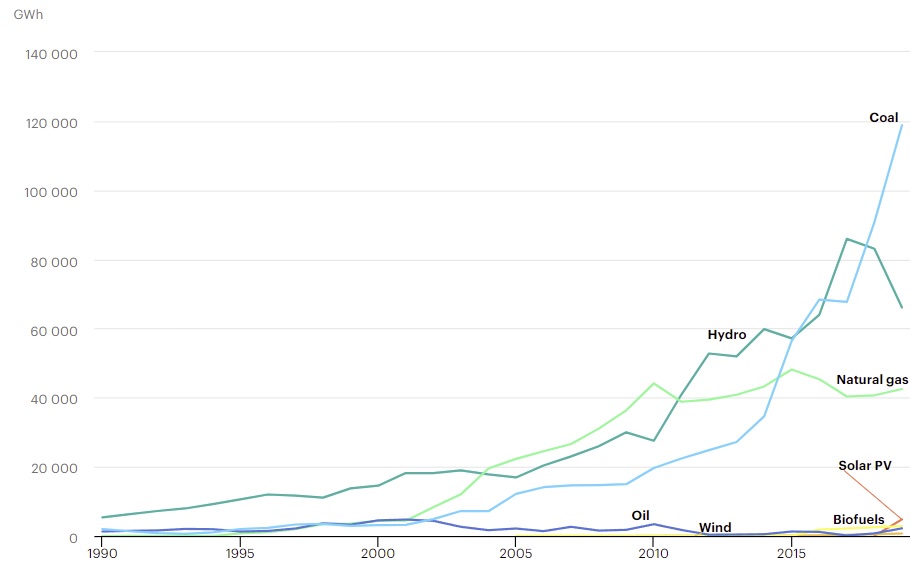 As Vietnam’s electricity demand has risen, it has used more and more coal (Chart: IEA)

While Vietnam’s coal use has grown over the last five years, it has also had a huge boom in solar power installations. IEEFA energy finance analyst Minh Thu Vu told Climate Home this had been “driven by the private sector”.

Vietnam has coal mines, mostly in the north of the country. But for nearly a decade it has been a net importer, shipping in coal from Indonesia and Australia.