Nepal may forgo a $500m grant from the Millenium Challenge Corporation to build power transmission lines, due to anti-US sentiment stoked by China 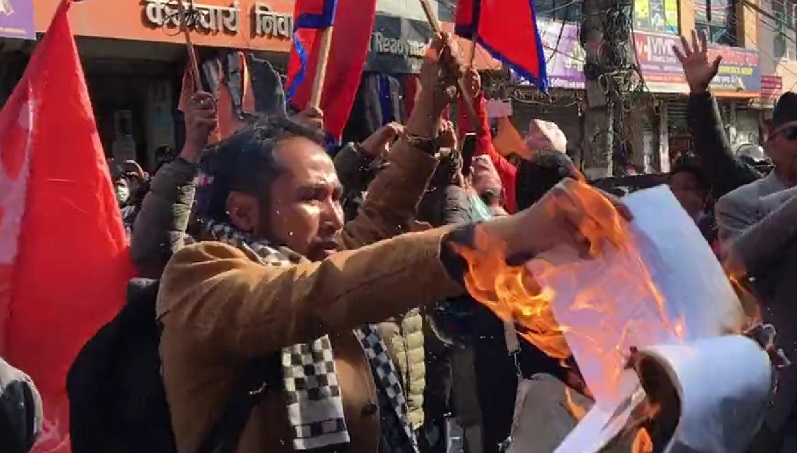 Protesters burning a copy of the MCC pact outside the parliament building in Kathmandu (Photo: Screenshot/Saloni Murarka/World Is One News)

A US-funded programme to spread clean power across Nepal and its neighbours is in danger of cancellation after “anti-imperialist” protests in the capital Kathmandu on Wednesday.

Nepal’s prime minister Sher Bahadur Deuba cancelled a parliamentary vote on the proposal as demonstrators set fire to draft copies of the agreement outside the building – before police dispersed them with water cannons and tear gas.

The US grant, worth half a billion dollars, would build 300km of transmission lines across Nepal, to link its hydropower stations with customers in Nepal and neighbouring India. This renewable energy would reduce the need for polluting and expensive fossil fuelled power imports.

But there are fears, especially within two governing Communist parties, that the programme will give the US more power over Nepal, bringing it into a geopolitical clash with China. These parties have opposed the grant in parliament and encouraged their supporters to protest against it.

The US has accused China of stirring up these fears. The programme does have strings attached but these are to promote good governance and cross-party approval. None of the conditions are military-related.

If the Nepalese parliament does not approve the grant by 28 February then the donor, the Millenium Challenge Corporation (MCC), will consider cancelling it at its next board meeting in March.

Vijay Kant Karna, chair of Nepal’s Centre for Social Inclusion and Federalism told Climate Home this would be “very unfortunate”. He added: “We really need these transmission lines. After a year or two our hydroelectricity system will be very badly affected. We will not be able to export to India.”

The MCC was set up by George W Bush’s US government in 2004. It is independent from the State Department and USAID and is funded by Congress. It gives out grants across the developing world and has become increasingly climate-focussed.

In 2014, the MCC’s board of directors accepted the Nepalese government’s request to develop a grant. In 2017, the details were finalised and signed in Washington by Deuba in a previous term as prime minister.

The deal was for $630m. Of this, $500m would come from the MCC and $130m from the Nepalese government. Around $400m of the MCC’s money would be spent on transmission lines and substations, with $50m going on road maintenance and the rest on administrative costs.

Manjeet Dhakal is a Climate Analytics analyst based in Kathmandu. He said that Nepal has been generating electricity from hydropower for over 100 years but that during the winter dry season, when the rivers are less powerful, it still has to import electricity from fossil fuel powered plants in India. 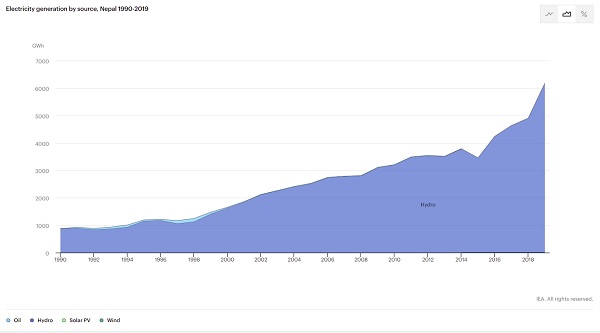 Nepal has 0.6GW of hydropower capacity and aims to scale up to 5-15GW of renewable electricity (including hydropower) by 2030. According to one study, it has potential to achieve 34 GW.

One barrier to growth is that private companies, which develop about half of Nepal’s hydropower, don’t want to invest in transmission lines as they are not profitable, Dhakal added.

“Transmission lines are very, very important so the electricity generated from one location can be connected to the national grid and the cross-border grid,” he said.

Dhakal added that the road maintenance funding would help rural Nepalis access resources and information and therefore be better able to adapt to the effects of climate change. The funding is for improving roads, not building new ones.

But this grant has become controversial. In May 2019, the US State Department’s deputy assistant secretary of state for South Asia, David Ranz, visited Nepal and told journalists that the MCC compact would boost regional connectivity which is “another critical aspect of our goals in the Indo-Pacific strategy”.

This mention of the “Indo-Pacific strategy” was seized upon by opponents of the MCC, who claimed it showed that the US was using Nepal in its geopolitical battle with China. Nepal has a long history of “non-alignment” – staying out of disputes between its powerful neighbours China and India and ideological adversaries like the US and Soviet Union.

According to Karna, the Chinese government and its allies in Nepal have stirred up these fears in a campaign of disinformation on social media and Youtube. “They have created a new narrative that MCC is not an infrastructure project but is part of a global American security strategy so that America wanted to create anti-China activities in Nepal.”

The US state department has accused China of having “actively fomented or encouraged or funded or facilitated” a disinformation campaign against the MCC. The Chinese state-owned news site Global Times called this a “baseless slander”.

In the same article though, the Global Times added: “The MCC is nothing more than a pact with the geopolitical purpose of targeting China.”

Karna said that the Chinese government has a lot of influence over the powerful Communist parties of Nepal, two of whom are junior partners in the coalition government.

These parties are led by veterans of the civil war, Pushpa Kamal Dahal and Madhav Nepal, who see the US as “imperialist” and China as an ally, Karna said.

Both have opposed the MCC, although Dahal earlier supported it, and encouraged their supporters to protest against the grant, leading to the clashes with police on Wednesday.

Protester Santosh Pradhan compared the MCC to the British East India Company, which colonised much of South Asia for commercial gain. “Just like the Indians were looted by the East India Company for 300 years, we don’t want that same story for Nepal,” he told World Is One News.

It is politically expedient for Dahal and Nepal to oppose the MCC, Karna said. There are elections in November and both can paint themselves as nationalists opposing US imperialism.

The MCC compact does contain conditions. It must be ratified by parliament to ensure it has cross-party support. Its critics say this violates Nepal’s constitution, in which only laws and treaties – not grants – need to be approved by parliament.

The compact says Nepal must form an “independent and capable” electricity regulator to ensure generators get fair access to the transmission network. Karna said that the World Bank, IMF and Asian Development Bank had called for this too and that the government is planning to carry out this reform.

It specifies that India must commit to building its section of the cross-border power lines, which it did in October 2021. It also contains anti-corruption and auditing measures and says that Nepal must increase its road maintenance spending.

On Wednesday, pro-MCC prime minister Deuba had planned to pursue a vote on the MCC in parliament but changed his mind at the last minute. The Indian Express reports that he may negotiate a coalition deal with opposition leader KP Sharma Oli, a Communist who is less stridently opposed to the MCC.

In September 2021, Deuba and Dahal assured the MCC they would get the grant approved and asked for more time. The MCC gave a deadline of 28 February 2022 – and a spokesperson told Climate Home they intended to hold the government to it.

“Ultimately, it is Nepal’s decision whether or not to accept this grant from the American people,” the spokesperson said.

Joe Thwaites, climate finance analyst at the Washington-based World Resources Institute, said the MCC would not want its work to come to nothing.

At the same time though, he said that the MCC is assessed on its effectiveness by Congress. “So if they’re sitting on $500m that hasn’t been dispersed then there will be questions about ‘why hasn’t that gone out?'” he said. “I don’t think anyone’s going to want to sit on money for too long when it could go elsewhere.”

In December 2020, the MCC’s board of directors cancelled a $480m grant for Sri Lanka after a new government led by Gotabaya Rajapaksa won an election arguing that the MCC was a threat to the Asian country’s sovereignty.