In a letter, Berlin stressed its opposition to nuclear while calling on the European Commission to ease restrictions on gas in the transition to clean energy 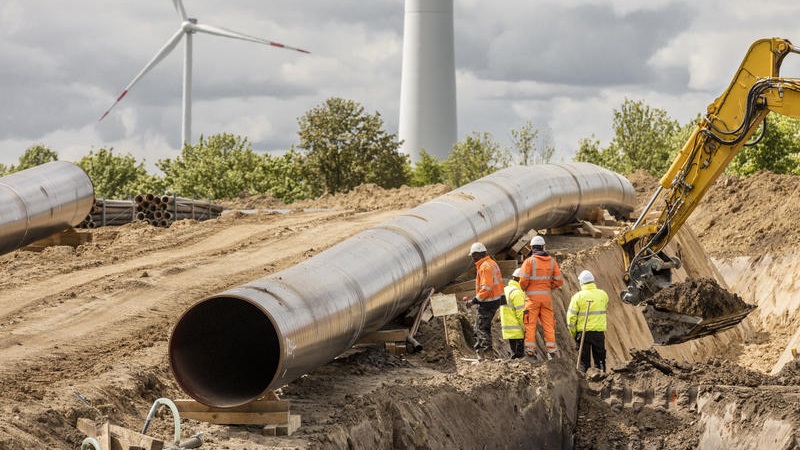 The construction of the EUGAL gas pipeline which will carry Russian gas to Germany and the Czech Republic (Photo: Paul Langrock/GreenPeace)

In its feedback to Brussels over the EU’s sustainable finance taxonomy, Berlin reiterated its opposition to nuclear power while calling on the European Commission to ease restrictions on fossil gas in the transition to a low-carbon energy system.

The deadline for EU member states to provide feedback to Brussels on a proposal to award gas and nuclear a green investment label expired on Friday (21 January).

In a letter sent to Brussels on the same day, Berlin reiterated its opposition to nuclear and made new detailed requirements on gas.

“As the federal government, we have once again clearly expressed our rejection of the inclusion of nuclear energy. It is risky and expensive,” Vice-Chancellor and Economy Minister Robert Habeck said in a joint statement with Environment Minister Steffi Lemke, both senior members of the Greens party.

But the letter also makes new requests to ease restrictions on fossil gas, calling on the European Commission to delete requirements aimed at promoting a shift to low-carbon gases such as biomethane or hydrogen in the transition to green energy.

Fossil gas used as “a fuel in ultra-modern and efficient gas-fired power plants forms a bridge for a limited transition period” to enable Germany’s “rapid phase-out of coal and thus achieve CO2 savings in the short term,” the letter reads.

And to achieve this transition, Berlin says it needs more time to switch to low-carbon and renewable gases than suggested in the Commission’s draft taxonomy proposal, circulated on 31 December.

“The intermediate targets called for in the fuel switch, with blending rates of decarbonised gases of 30% by 2026 and 55% by 2030, are not realistically achievable,” Berlin warns in the letter.

With clean hydrogen still in the the development phase, Habeck fears that promoting the green fuel in electricity generation will deprive German industry from a much-needed low-carbon energy source.

This is why Germany is asking Brussels to remove all intermediate targets for hydrogen, saying the fuel switch should “be enabled in a flexible manner after 2036.” And in any case, fuel-switching goals should be treated as guidelines rather than hard targets, “based on an assessment with a view to the available fuels,” the letter argues.

The letter also supports the “extension of district heating networks” to decarbonise Europe’s heating system. “Therefore, the replacement rule for district heating should be eliminated or at least an appropriate capacity increase should be provided, as a comparison to existing plants is not adequate,” the letter notes.

Most district heating systems currently run on coal or gas – both fossil fuels which need to be phased out in order to support the EU’s goal of becoming climate neutral by 2050.

In its draft taxonomy text, the European Commission also promoted fuel-switching, by awarding a green investment label only to gas plants that replace more polluting coal power stations. To qualify for the green label, Brussels also requested that new installations must achieve a 55% reduction in greenhouse gas emissions compared to their predecessor.

But Germany says the requirement is too strict. “The commitment to a 55% greenhouse gas reduction is unrealistic here,” notes the letter by Habeck, which calls upon the Commission to “establish realistic values” instead.

The German letter also says a green label should be awarded to state-of-the-art gas power plants when they come in replacement of an old one, a proposal which is likely to infuriate green campaigners who have already criticised Germany’s push for gas.