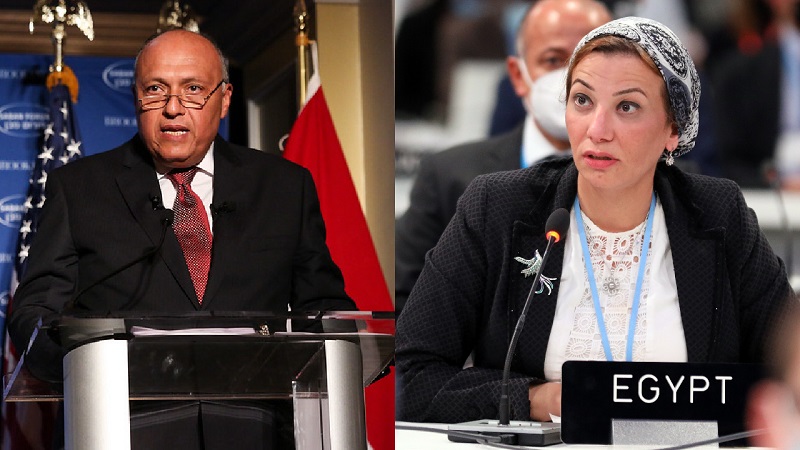 The Egyptian government has chosen foreign minister Sameh Shoukry to lead the Cop27 climate talks in Sharm El-Sheikh in November.

The country’s environment minister Yasmine Fouad, a climate scientist, will be Cop27 “ministerial coordinator and envoy”.

Their appointments were announced in a joint statement with the UK after they met with Cop26 president Alok Sharma.

While Shoukry has no significant experience or expressed interest in climate change, Fouad was lead author on a chapter of the Intergovernmental Panel on Climate Change’s special report on desertification in 2017 and co-chaired finance talks at Cop26 in November.

Fouad has worked for UN organisations, NGOs and universities and is a veteran of the environment ministry, having become the deputy minister in 2014 and promoted to the top job in 2018.

Of the 26 Cop summits, 21 have been chaired by men. At every summit, there have been more male delegates than female.

Shoukry is a career diplomat who worked his way up to become then-president Hosni Mubarak’s ambassador to Washington in 2008, a job he held on to until 2012 despite the Arab Spring uprisings.

After Abdel Fattah el-Sisi seized power to become president in 2014, he brought Shoukry back into government as foreign minister.

In 2008, the US ambassador to Geneva Warren Tichenor described Shoukry, then his Egyptian counterpart, as being “aggressive”, “heavy-handed”, “curt and rude”.

In a confidential message later revealed by Wikileaks, Tichenor said Shoukry had an “activist and at times aggressive approach to Geneva multilateral diplomacy, in pursuit of goals the US does not support”.

Writing to his successor in the job, Tichenor said Shoukry spoke excellent English and some Spanish, “can be charming” and a “gracious host” who “reminisces fondly about his years in grade school in the Washington DC area”.

But “even in his personal comportment, he reveals moments of heavy-handedness, as in the derisive way in which he treats his driver” and being “curt and rude” to visitors to his office brought by the US mission.

After being chosen as Cop27 host by the African Group, Egypt promised to make resilience and adaptation to the effects of climate change its priority.

In a climate plan submitted to the UN in 2017, Egypt outlined the country’s vulnerability to heatwaves, flooding and water scarcity from climate change. It did not quantify an emissions target.

Under the Paris Agreement, countries were supposed to raise the ambition of their climate plans by 2020. Egypt has yet to do so.

A 2020 Ipsos Mori poll found that awareness of climate change is lower in Egypt than in other North African countries.

Just 26% of Egyptians said climate change “exists and is mostly caused by human activity”. In Morocco, which has hosted two Cop summits, that figure was 71%.