While advocates want to link the climate and biodiversity agendas, critics say nature should not be commodified and human rights safeguards are needed 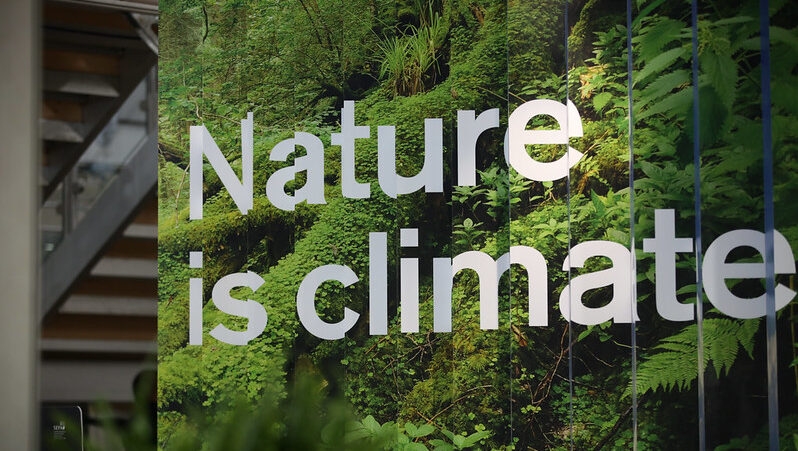 A sign in the Cop26 venue in Glasgow, UK (Photo: UNFCCC/Flickr)

A push to include nature-based solutions, like forest protection and mangrove restoration, in the outcome of climate talks in Glasgow, UK, is proving divisive.

A draft decision published on Wednesday emphasised “the critical importance of nature-based solutions and ecosystem-based approaches, including protecting and restoring forests, to reducing emissions, enhancing removals and protecting biodiversity”.

While the importance of nature featured in the negotiated outcome of Cop25 in Madrid, if adopted it would be the first time “nature-based solutions” made it into a UN climate pact.

On Friday, the term nature-based solutions was replaced with the phrase “protecting, conserving and restoring nature” in an updated version of the text.

Supporters see nature-based solutions as a way to connect the climate and biodiversity agendas, setting the scene for an effective biodiversity deal in Kunming, China next year. Critics object to the implied commodification of the natural world and say the term is misused by big business to justify continued pollution.

Laurence Tubiana, CEO of the European Climate Foundation and an architect of the Paris Agreement, said at a press conference on Thursday that she hoped nature-based solutions would make it into the final pact. “It’s good that we are going away from the vision of nature being offsets – and more towards the idea of restoration, of nature being an important element of the climate package,” she said.

“More and more we will see that it is impossible to distinguish between biodiversity and climate. They’re two parts of the same problem,” she said.

A space is opening up to discuss oil and gas exit at Cop26. Lobbyists are pushing back.

An observer of the talks told Climate Home News that the UK, Colombia, France, the EU, US, Singapore, Fiji, DRC, Mexico, Norway, Australia, Canada and Liberia are all pushing for nature-based solutions to be included in the final Cop26 text.

At a meeting of heads of delegation on Wednesday, Bolivian negotiator Diego Pacheco Balanza objected to the phrase on behalf of the like-minded development countries (LMDCs).

“This text assumes that nature is only in service of people’s needs, but nature has an intrinsic value. It is sacred. That must be reflected. ‘Nature-based solutions’ were never negotiated here,” Bolivia’s negotiator said, as reported by an observer who attended the meeting.

China, the host country for biodiversity talks in April, is a member of the LMDCs. The Chinese delegation did not make anyone available to comment.

Gavin Edwards, WWF’s nature lead at Cop26, told Climate Home News that the inclusion highlights that “nature has truly arrived in the climate discourse” and helps “bridge the silo between the nature and climate community”.

He said that if the final Cop26 text references nature-based solutions, it will “strengthen the hand for it to be included in the CBD [Kunming biodiversity agreement]”. It was removed from an early draft of the biodiversity convention following opposition by some African governments, Brazil and Argentina.

“It will be very hard for [nature-based solutions] not to be an outcome in the CBD if it is agreed at Cop[26],” said Edwards. “More governments are keen to link these two agendas, of biodiversity and climate. Nature-based solutions [provide] that linkage.” 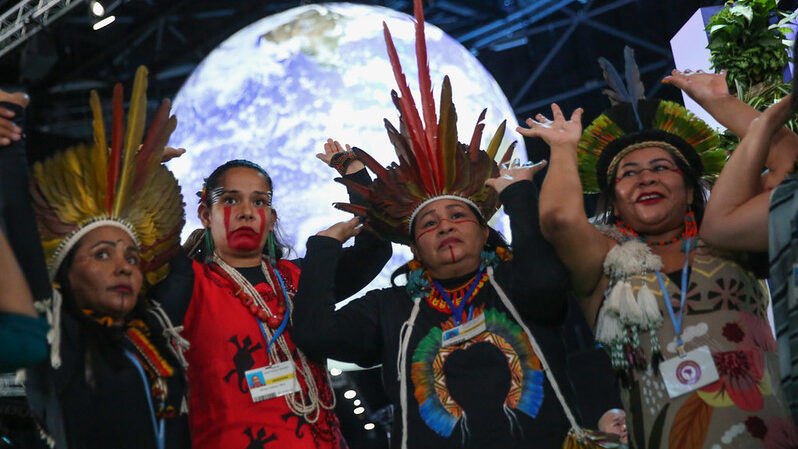 Indigenous leaders from forest regions have mixed feelings about the concept, stressing that it must come with safeguards for their rights.

Genilda Maria Rodrigues, an indigenous observer from the Kaingang community in southern Brazil, said she welcomes nature-based solutions as restoration of forests is urgently needed in her region. “We are approaching the point of no return,” she said. “We want someone to help our community reforest the area…

“But it’s very important that it is done in a transparent way. We don’t want it [done in] any way, but in the right way, with the consultation of the indigenous community,” she added.

There are also concerns that polluters could use nature-based projects to offset rather than reduce their own emissions.

“When they do, they end up compounding the injustice of climate change,” she said, adding that there is currently no official definition, criteria or safeguarding mechanism for nature-based solutions.

“We’d rather see language that recognises the critical importance of biodiversity and ecosystems to addressing the climate crisis, that doesn’t set up nature for being a solution to corporations’ pollution,” she said.

This article was updated on 12 November 2021 to reflect new language in the Cop26 cover text.