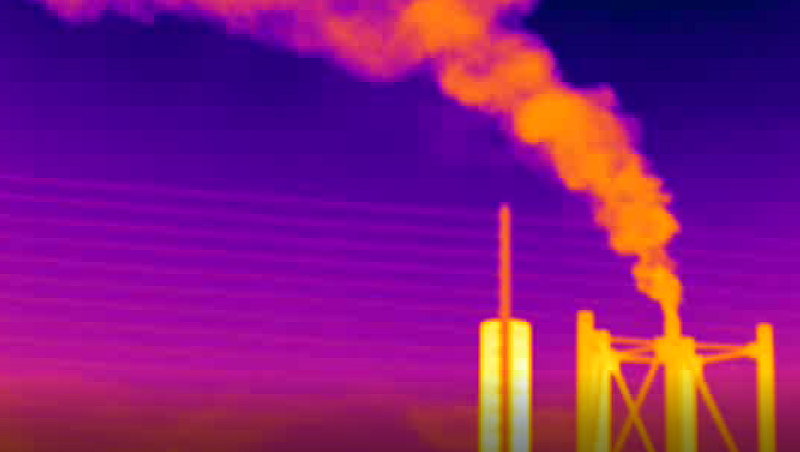 A sponsor of the Cop26 climate talks has been found to be leaking a particularly damaging greenhouse gas into the atmosphere from sites across England.

Turitto has been travelling around England in a rented campervan with an infrared camera, which picks up heat, and a methane sensor on a long white stick. Campaigners have used similar methods to reveal methane emissions from oil and gas installations across Europe and North America.

Climate Home News accompanied Turitto on a trip to National Grid’s LNG storage and regasification facilities on the Isle of Grain. While the camera did not pick up a specific methane leak there, the methane monitor recorded a spike at a spot downwind of the facility.

Security guards contracted for National Grid pulled over the van after it briefly and unwittingly strayed onto a private road. After Turitto explained what he was doing and what he had found, they suggested that the methane was probably from the marshland which the facility is situated on.

Turitto told Climate Home News he was impressed by their level of knowledge. Wetlands like marshes are a source of methane. But the spike in methane was concentrated in such a small area that the marsh was unlikely to be the source, Turitto argued. 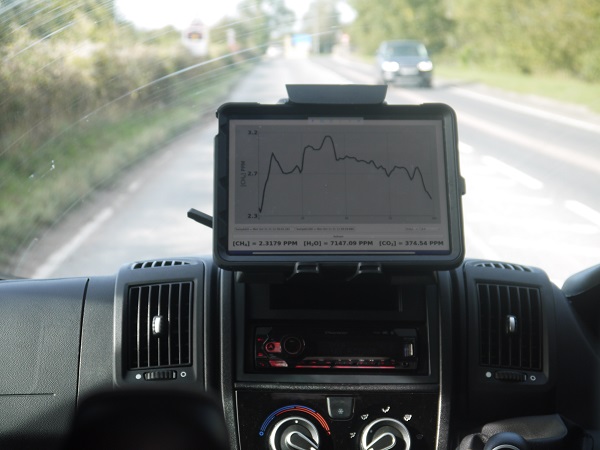 This screen displayed the level of methane which the sensor was picking up. (Photo: Climate Home News)

At other stops on his tour, Turitto’s camera picked up stronger evidence of methane leakage.

He visited six of the 25 compressor stations which National Grid operates across England. These keep up the pressure of gas flow through pipelines across the country.

Turitto said these compressor stations are not supposed to emit gas except through their relief pipes in an emergency to prevent an explosion.

But his camera picked up emissions at five of the six including two described as “some of the largest emissions events I have witnessed in Europe after visiting more than 250 sites in 12 countries”. 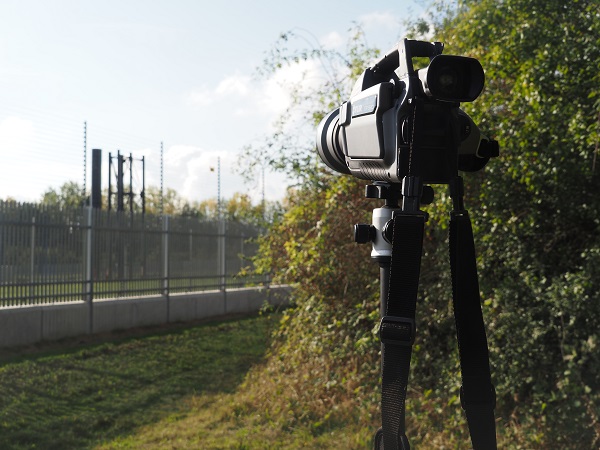 The UK has signed up to a pledge along with the EU and US to cut methane emissions 30% by 2030, and is set to encourage other countries to join at Cop26.

“What I’m seeing on the ground is that the UK government really needs to take action,” Turitto said.

National Grid operates the gas and electricity transmission networks across the UK and has a 2050 net zero emissions target. As a “principal partner” of Cop26, it will be showcasing its role in facilitating clean electricity, electric vehicles and low-carbon heating.

When presented with Clean Air Task Force’s findings, a spokesperson for the National Grid attributed the leaks to maintenance work.

After maintenance is carried out, National Grid says it is required to test the units which requires pressuring them with gas and running the turbine. This explains the emissions from Chelmsford and Cambridge, they claimed.

When asked how long this venting of emissions takes, a spokesperson said it normally takes between five and ten minutes. But Turitto witnessed these emissions at Chelmsford compressor station on three separate days – 10, 15 and 21 October – and each time he witnessed emissions for more than ten minutes.

Clean Air Task Force’s Jonathan Banks responded: “As we made repeated visits to several of these sites, it seems unlikely all the footage happened to be taken during 5-10 minute windows of maintenance. But, even if what we are seeing is maintenance, in these situations there is almost always a way to capture the released gas or destroy it.”

Methane can be captured and sold but doing so is often unprofitable. It can also be destroyed by burning it, known as flaring, which makes it less damaging to the environment as the potent greenhouse gas methane reacts with air to produce less potent carbon dioxide.

Banks added: “Even with the best intentions, self-regulation is not an effective strategy for lowering methane emissions.”

Turitto called on the UK government to force companies to conduct monthly inspections at compressor stations and other oil and gas facilities.

Regulation of gas compressor stations in England is the responsibility of the Environment Agency. In its latest annual report, the regulator claimed that methane emissions at sites it regulates had fallen 45% since 2010.

When asked about the sites Turitto visited, a spokesperson said: “Environmental permits require these operators to minimise emissions to the environment and as part of our compliance role we audit the site operations.

“We have not identified any major permit non-compliance at these sites.”

Methane emissions have 86 times the atmospheric warming effect of carbon dioxide over a 20-year period. They also contribute to increasing ozone levels, which are linked to health problems.

The compressor stations with leaks were in Chelmsford, Cambridge, Diss, Hatton and Kings Lynn – all in eastern England, where Turitto travelled. His cameras also picked up emissions from oil wells around England.