UK, Indonesia and Mexico are among the first signatories to a pact to cut methane emissions, which can rapidly curb global warming 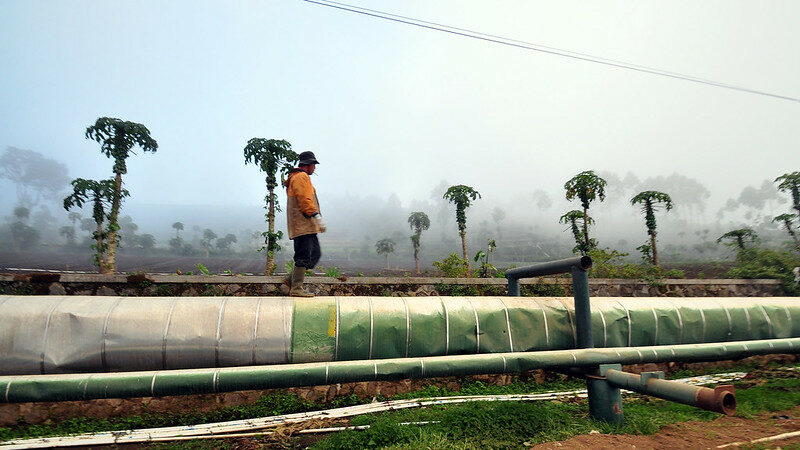 A geothermal gas pipeline in Dieng, Indonesia, one of the countries to sign up to the US-EU alliance to slash methane emissions 30% by 2030 (Photo: Gita Aulia/Flickr)

Seven countries have joined the US and EU in committing to cut their methane emissions by 30% over the next decade.

On Friday, the US and EU made a joint pledge to slash methane emissions, which are mainly released from abandoned coal mines, oil and gas operations, and farming, by 2030 and encouraged other nations to do the same.

Although it only stays in the atmosphere for around nine years, methane has a warming impact 84 times that of CO2 over a 20-year period. It is responsible for almost a quarter of global warming to date.

At the Major Economies Forum on Friday, US president Joe Biden called on leaders to tackle the issue. “This will not only rapidly reduce the rate of global warming, but it will also produce a very valuable side benefit, like improving public health and agricultural output,” he told the assembled premiers.

“We believe the collective goal is both ambitious but realistic, and we urge you to join us in announcing this pledge at Cop26,” he said, referring to the UN climate summit in Glasgow, UK in November.

Of those in attendance, the UK, Indonesia, Italy, Mexico and Argentina signed up, while Australia, Japan and South Korea stayed silent. Ghana and Iraq added their names to the alliance over the weekend. The countries that have signed up include six of the top 15 methane emitters and account for one-fifth of global methane emissions, the White House said in a statement.

Despite its global warming impact, tackling methane has received far less political attention than carbon dioxide emissions. The pact, backed up by the EU’s methane strategy and Biden reinstating methane rules in the US, signals that this is starting to change.

“World leaders are waking up to the fact that methane presents a quick win against climate change,” Jill Duggan, executive director of EDF Europe, told Climate Home News. “With public demand for climate action higher than ever, this pledge presents a clear, tangible target that countries obviously feel is attainable.”

According to the latest report by the Intergovernmental Panel on Climate Change (IPCC), “strong, rapid and sustained reductions” in methane emissions are needed, in addition to CO2 reductions, to keep 1.5C within reach.

Methane levels in the air are now higher than at any point in the past 800,000 years and are tracking close to the high emission scenarios outlined in the IPCC’s previous assessment in 2013.

The methane pledge is in line with IPCC recommendations that methane and black carbon reductions of 35% or more are needed by 2050, compared to 2010 levels, to limit global warming to 1.5C.

A paper in Environmental Research Letters earlier this year found an all-out effort to slash methane emissions could slow the rate of temperature rise by 30% and avoid 0.5C of warming by the end of the century.

Using existing technology, the oil and gas industry could achieve a 75% reduction in methane emissions by 2030, according to the International Energy Agency.

Kalesi warned that without reliable monitoring and reporting in place, it would be difficult to track progress towards the 2030 goal.

Campaigners armed with satellite observations and infrared cameras have shown that the scale of “fugitive emissions” of methane from oil and gas installations is widely underreported. While the EU, for one, is introducing stricter standards for monitoring and reporting emissions under its methane strategy, it will take time for this to result in better data.

“We have no access to accurate data and I don’t expect the world to have access to this before 2026-2030,” Kalesi said. “There is currently no consensus in terms of the baseline and measurement methods.”

In fossil fuel sectors, while the data is murky, the technological solutions are clear. In farming, responsible for more methane emissions than coal, oil and gas industries put together, there are fewer quick fixes.

“In the agriculture space, there are existing technologies and practices that can be utilized to get emission reductions, but not on the order of what can be readily cut from oil and gas as well as coal,” said Jonathan Banks of Clean Air Task Force.

Biden’s agriculture department is working with farmers to improve practices on a voluntary basis, according to the White House press release.

A more culturally sensitive solution is for people to eat less meat, particularly from ruminants like cattle, goats and sheep that belch methane.

The Humane Society of the US argues technologies “do little to address the problems inherent in industrial animal agriculture”. “A better strategy – for the environment, climate change mitigation, human health, and animal welfare – is reducing our overall consumption of animal products and making more climate-friendly food choices,” it says.