Analysts say renewables, insulation and electrification of heating and cooking are the answer to soaring gas prices across Europe 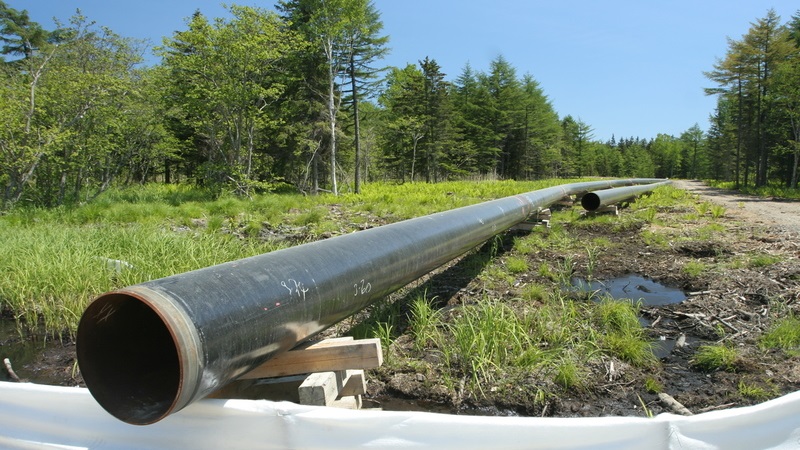 Construction of a gas pipeline in the Russian region of Sakhalin (Photo: Vadim Kantor/Greenpeace)

Europe’s gas storage tanks are low because a lot of gas was used to heat homes in an especially cold winter and spring. Russia did not increase gas supplies over the summer to refill the tanks.

This low supply of gas, coupled with rising demand from Asia, has pushed up the price of gas and therefore the price of electricity across Europe.

On 7 September, gas was trading at €52/MWh at Europe’s main benchmark hub, more than triple the price at the same time last year. Electricity prices have topped €100/MWh in many markets.

This has left many Europeans worried about whether they will be able to afford to heat their homes this winter.

While some commentators have blamed climate policy for rising energy costs, most experts say the crisis reinforces the case for switching to clean energy and reducing reliance on a volatile commodity.

After a mild start to last winter, European temperatures plummeted in January 2021. Parts of central Spain saw their heaviest snowfall in decades.

It has been a historic snowstorm #filomena in #Madrid with massive traffic disruption. Accumulations between 20cm-40cm (and more with drifted snow) were recorded in the city ,the greatest since January 1952. Record still stands in November 1904 with 50cm-100cm. #Filomenamadrid pic.twitter.com/9qRhrLXKsd

Gas storage tanks are usually filled up over the summer. But Russia refused to send more gas than it was legally obliged to. Russian exports to Europe were down from their pre-pandemic 2019 level.

This is partly because Russian gas supplies were low too after a similarly harsh winter.

Geopolitical analysts have also suggested that Russia wanted to pressure Germany to approve the Nord Stream 2 gas pipeline against fierce opposition from the US and Ukraine. 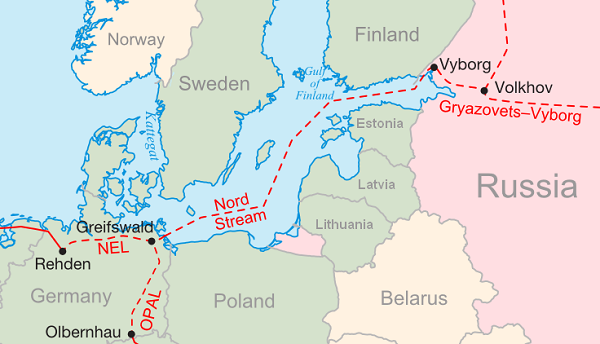 Europe’s situation was made worse by a lack of alternatives to Russian gas.

As well as moved through pipelines, gas can be liquified and transported on ships around the world. Known as LNG, this product can go wherever prices are higher – which at present is Asia.

In a number of European countries, sceptics of climate policy have argued the crisis is the result of politicians prioritising sustainability over affordability and security of supply.

For example, the Daily Mail newspaper gave columnist Matt Ridley a two-page spread to rail at the “eco self-harm” of the UK’s net zero target and “unreliable” wind power.

The Daily Mail has, predictably, cleared its pages today for a climate sceptic.

Funny, though, that it doesn't find space to mention the author has made £££ from coal mining on his land.

Or – talking of "devastating audits" – remind readers he was chair of, er, Northern Rock pic.twitter.com/6NcTFghcYQ

A dip in the supply of wind power in recent weeks due to weak wind speeds did contribute to the rising electricity price, according to the International Energy Agency, but were not the main driver.

“Recent increases in global natural gas prices are the result of multiple factors, and it is inaccurate and misleading to lay the responsibility at the door of the clean energy transition,” said IEA chief Fatih Birol in a statement.

Sarah Brown, an electricity analyst at think-tank Ember, said wind availability had only a “very marginal” effect on the electricity price. “Blaming low wind is clutching at straws,” she said.

A rising carbon price on the EU market is another factor, but again it is secondary to the effect of gas shortages. More coal is likely to be burned this winter, increasing demand for carbon allowances to cover these extra emissions.

In August 2021, according to Ember analysis, carbon costs were 20% of the total cost of gas generation. 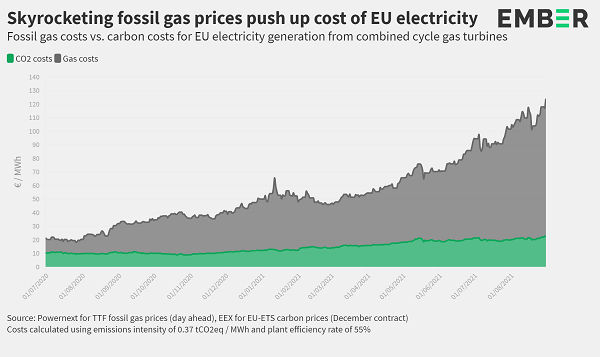 Simone Tagliapietra and Georg Zachmann of the Bruegel Institute argue that investment in renewables is the solution to energy price volatility.

They write: “Investments in fossil assets aren’t sustainable long-term. But governments have not yet committed clearly enough to a low-carbon future.”

“So,” they add, “the energy supply-demand balance in the EU will be volatile depending on how quickly fossil fuels are phased out and green energy is phased in.”

Some politicans have accepted this. Spain’s ecological transition minister Teresa Ribera blamed fossil fuels and said the direction of structural reform to support clean energy must stay the same, with temporary measures to relieve costs on families and efficient industry.

Austrian climate and energy minister Leonore Gewessler said a faster shift to renewables would make the EU “more resilient to price fluctuations in the long term.”

Robert Tomaszeski, an energy analyst at Warsaw-based think-tank Polityka Insight, said populist politicians in Poland had blamed the EU and its climate policies.

“On the other hand,” he said, “the government is preparing an information campaign on rising energy prices, which may calm the situation down a little bit.”

In the UK, the crisis has sparked calls for the government to use its upcoming strategy on heat and buildings to insulate homes and transition them away from gas heating and cooking.

The government’s “green homes grant” subsidy scheme was scrapped in March after just six months, after the company running the scheme failed to make it work.

Sam Hall, director of the Conservative Environment Network, tweeted: “Vouchers for heat pumps and insulation are… needed to reduce gas for heating.”