The IUCN Congress has come up with a blueprint for a “transformative” deal to protect plants and wildlife, which members hope governments will embrace in Kunming 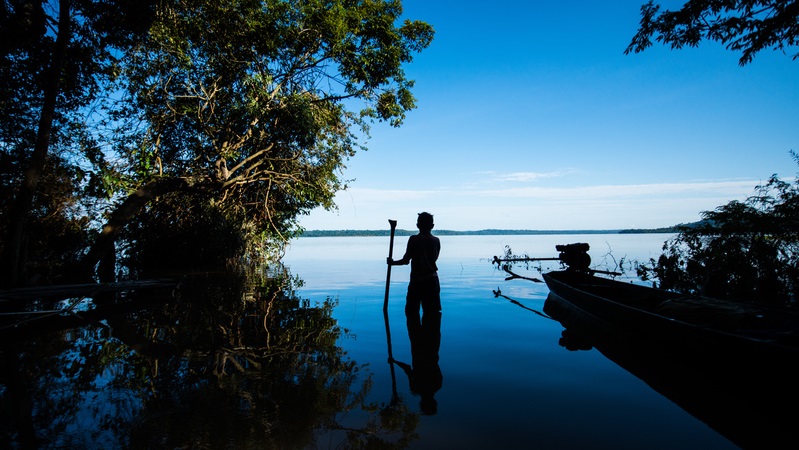 A member of the Munduruku people in the Tapajós river, in the state of Pará, Brazil (Photo: Valdemir Cunha / Greenpeace)

Conservationists have called on countries to make the world “nature positive” by 2030 as they hope to shape slow and difficult international negotiations to protect the planet’s plants and wildlife.

The IUCN Congress closed in the French port city of Marseille on Friday after a week of discussions between campaigners, indigenous groups and governments, eager to influence the UN biodiversity talks, which are due to open in Kunming, China, in October and finish in May 2022.

In its final hours, the Congress overwhelmingly endorsed a blueprint to halt and reverse biodiversity loss. It calls for a deal to “ensure there is more nature globally in 2030 than there was in 2020”.

The verdict has been largely welcomed by campaigners who earlier in the summit expressed “deep concerns at the lack of ambition” of the draft framework for protecting biodiversity under the UN Convention on Biological Diversity. The framework is billed as the equivalent of the Paris Agreement for nature.

Gavin Edwards of WWF, which co-sponsored the motion, told Climate Home News the proposal aimed to plug the gaps of the agreement with “very specific guidance” to governments and establish “a unifying direction” for the talks.

“It takes us a necessary step closer to a more equitable, nature positive and net zero emissions world, but there are still a few critical steps ahead to truly secure this. Governments and civil society organisations must translate the intent shown in the motion into concrete action,” he said.

In response to the stalled biodiversity talks, IUCN members urged countries to adopt a “transformative” global framework for nature that addresses all the drivers of biodiversity loss and contains “an inspirational and easy to communicate 2030 mission”.

The concept of “nature positive” could be for nature what the 1.5C goal has become for climate ambition, he explained. It could be measured by the population of species and the number of protected and restored ecosystems, as well as reducing drivers of nature destruction such as harmful agricultural subsidies.

Borrowing an idea from the climate process, the motion further calls for a “ratchet” mechanism to regularly review and strengthen national and sectoral targets.

Watchers of the biodiversity talks have repeatedly warned that the draft biodiversity deal fails to provide a concrete action plan to meet its aspirations for 2030 and beyond.

Although none of the motions agreed by the IUCN Congress are legally binding, Edwards said they would become a powerful lobbying tool ahead of Cop15 in Kunming.

Indigenous groups took part in the Congress as full members for the first time and won backing for a motion to protect 80% of the Amazon by 2025.

In the Marseille manifesto, the summit’s main outcome document, IUCN members recognised and supported indigenous peoples’ rights and roles “as leaders and custodians of biodiversity”.

The Congress agreed that targets for protected areas had to reinforce their rights as set out in the UN Declaration on the Rights of Indigenous Peoples. 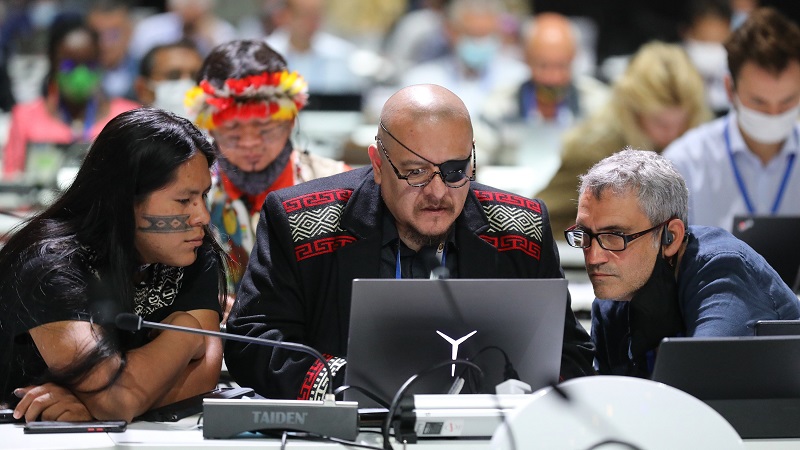 Participants of the IUCN Congress conferring during a break (Photo: IISD/ENB)

Victoria Tauli-Corpuz, UN special rapporteur on the rights of indigenous peoples, told Climate Home the IUCN Congress had been an opportunity to push for a rights-based approach to conservation to thread through the biodiversity treaty.

The latest draft of the biodiversity agreement refers to indigenous peoples in three of 21 targets and only mentions the need to “respect their rights over lands, territories and resources” in the last one.

Last month, the Chinese presidency of the talks published the draft Kunming declaration, the summit’s high-level political statement – an unusual move which took observers by surprise.

The four-page document merely “acknowledges that indigenous peoples and local communities have contributed to the conservation and sustainable use of biodiversity through the application of traditional knowledge, innovations and practices”.

It makes no mention of indigenous peoples’ rights nor does it commit countries to recognising them.

To close the climate ambition gap, we must look beyond national targets

Judith Shapiro, of the American University, Washington DC, told Climate Home that China speaks of “minority nationalities” rather than indigenous people and has no tradition of prior consultation.

“China would argue that minority nationalities already enjoy unusual protections within a country that is essentially one big happy family,” she said, adding that Beijing would oppose any overarching framework that would be seen as interfering with sovereign rights.

In the name of “going green”, China has exploited the territories of ethnic minorities through mineral extraction and dam building, and relocated nomadic peoples away from lands designated as nature reserves.  “It is extremely unlikely that China would accept any framework that would interfere with that agenda,” she said.

Her colleague Yifei Li, of New York University Shanghai, told Climate Home the language around indigenous rights was unlikely to lead to open confrontation at the talks “because China is uninterested in having a substantive discussion about this issue”.

Tauli-Corpuz said indigenous peoples’ rights needed to be reflected across the entire treaty and not in isolated targets. While there is a broad consensus for adopting a rights-based approach among the conservation community, she said, “there are still a lot of governments that don’t want it to be mentioned”.