On Brazil's border with Peru, evangelical churches are multiplying, in a threat to uncontacted indigenous groups

With its wooden houses on stilts, narrow streets and open sewers, Atalaia do Norte has a disproportionate number of churches and missionaries for its 20,000 inhabitants.

The town is the gateway to the Valley of Javari indigenous land, home to seven peoples and several isolated groups – the largest non-contacted population in the world.

At least 15 different denominations are represented in Atalaia. Among them are the Order of the Holy Cross, founded in the region by a messianic leader from Minas Gerais, the more traditional Fundamental Baptist Church, the Catholic Church, the Israelite Mission of the New Universal Pact – that believes Jesus Christ was reincarnated in Peru – and the American group Jehovah’s Witnesses, whose newly built church is one of the largest in the town.

Atalaia do Norte attracts missionaries from the USA, Canada, Spain, South Korea, Argentina and other regions of Brazil. The fight for the hearts and minds of the inhabitants of the Javari has been taking place for decades but intensified in 2020, when the government of Jair Bolsonaro put the former missionary Ricardo Lopes Dias in charge of isolated and recently contacted tribes at Funai, the government body responsible for protecting indigenous interests.

Bolsonaro, while a Catholic himself, has close ties Brazil’s growing evangelical community. 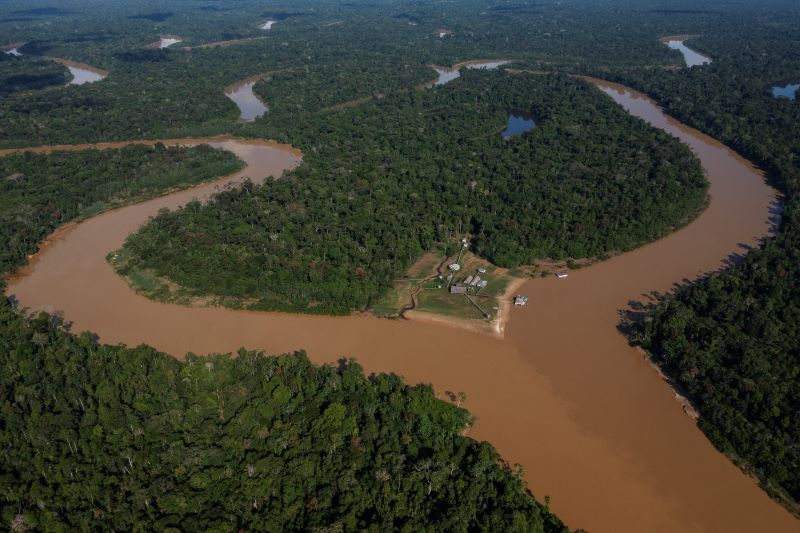 Funai’s base on the banks of the Ituí river at the confluence with river Itacoiai serves as the checkpoint for entry in the Valley of the Javari Indigenous Land, in the Amazonian region (All photos: Lalo de Almeida/Folhapress)

Official policy is to avoid contact with isolated tribes unless they initiate it or their survival is at stake. Previous encounters have been deadly, as these forest dwellers have no immunity against diseases common in the general population.

Yet the choice of a religious leader to manage relations with isolated peoples raised the worrying prospect of evangelical missions into the rainforest. While neither Dias nor Bolsonaro openly advocated for changing the policy against contact, The Intercept obtained audio of an influential evangelical, Edward Mantoanelli Luz, saying the nomination of Dias was intended to achieve just that.

Heavily criticized, Dias ended up leaving the post in November, after nine months on the job. 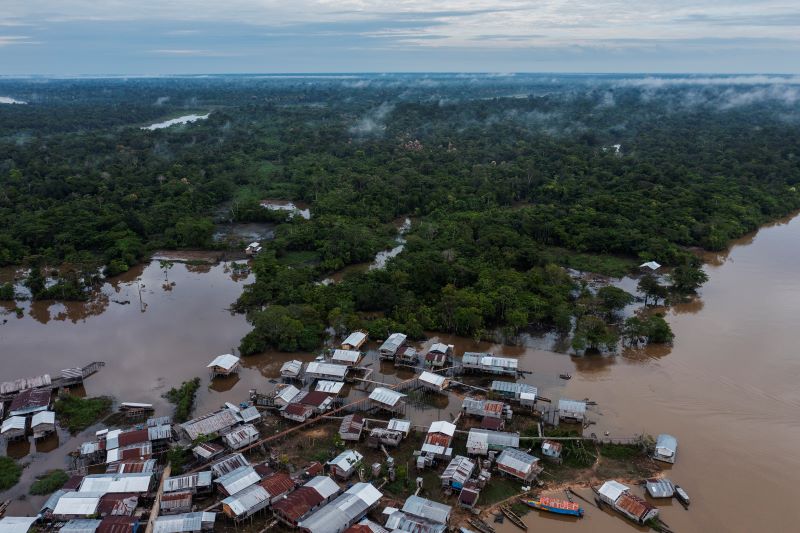 Aerial view of Atalaia do Norte, a town situated in the Valley of the Javari, in the Amazonas region

Bolsonaro’s empowerment of evangelists comes as part of a wider agenda to open the Amazon rainforest to mining, large-scale agriculture and cattle, at the expense of indigenous rights.

A retired army captain, he subscribes to the military dictatorship (1964-1985) mindset towards the Amazon. For Brazil’s military, indigenous territories are both a threat to national security, as they could initiate independence movements, and an obstacle to “progress”.

With his allies in Congress, Bolsonaro has been trying to revise indigenous land demarcation rules in order to stop and even revert some of them.

Indigenous groups, organised under the banner Univaja (Union of Indigenous Peoples of the Javari Valley), fought Dias’ approach in the courts and won a number of favourable verdicts.

In the religious arena, a leading opponent to the missionaries’ efforts to gain converts is the indigenous minister Marcos Dunu Mayoruna, also known as Pepe. 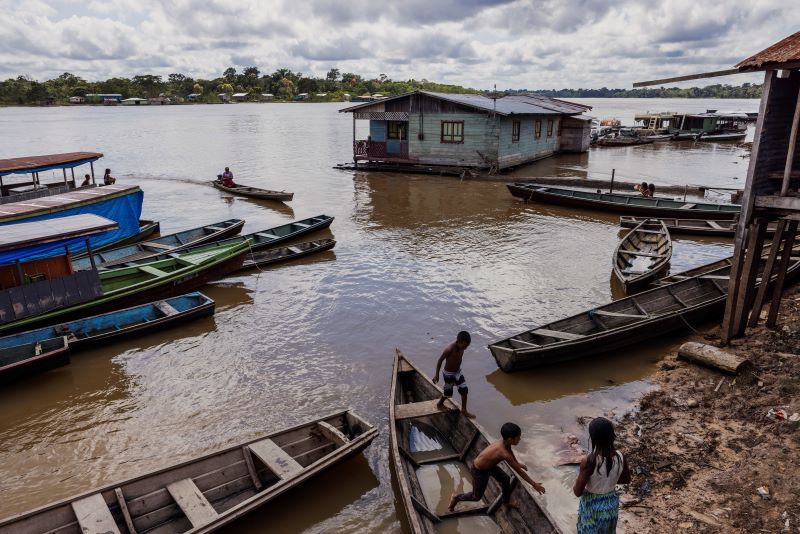 Children playing in the Javari river

Pepe, 43, who has long hair, wooden earrings and the body paint traditionally used by the Mayoruna people, goes against the common image of Evangelical pastors in suits, ties, formal trousers and closed shoes.

His message is clear: in his view, conversion should not mean abandoning the indigenous culture, as has happened since colonial times, first with the Catholics and more recently with the Evangelicals.

Pepe welcomed us in a small indigenous longhouse with cement floor an no walls, where on weekends he teaches the word of God to young Indians who have migrated to Atalaia do Norte. The structure stands in contrast with the solid Christian churches’ buildings. 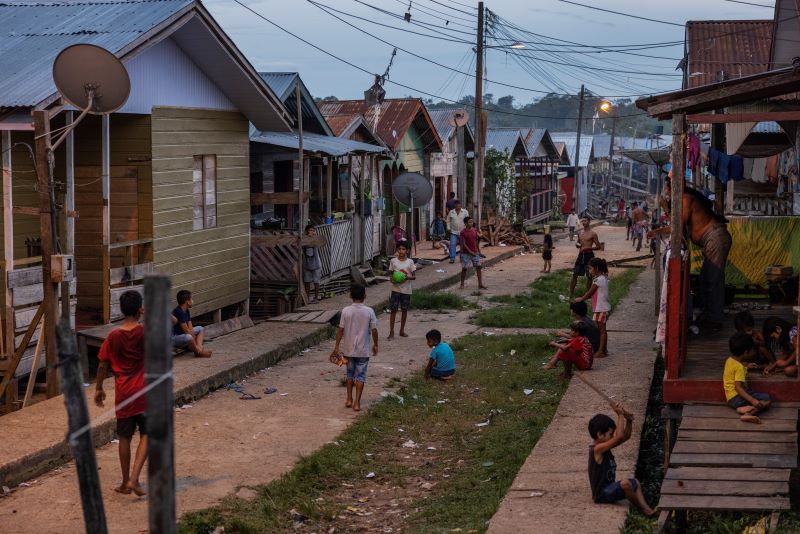 Pepe was born in a village of the Mayoruna (or Matsés), the most numerous people in the area, with around 4,200 inhabitants in Brazil and Peru. His people’s contact with whites took place under the previous generation, in 1969, through two female American missionaries.

Over a short period of time, Pepe tells us, the Mayoruna stopped living in malocas (large communal dwellings), exchanged their nomadic life style for living in villages, abandoned their traditional rituals and suffered from the diseases brought by the whites.

When he was young and had problems with alcohol addiction, Pepe dreamt that Jesus, speaking in the Mayoruna language, told him he needed to change his ways. 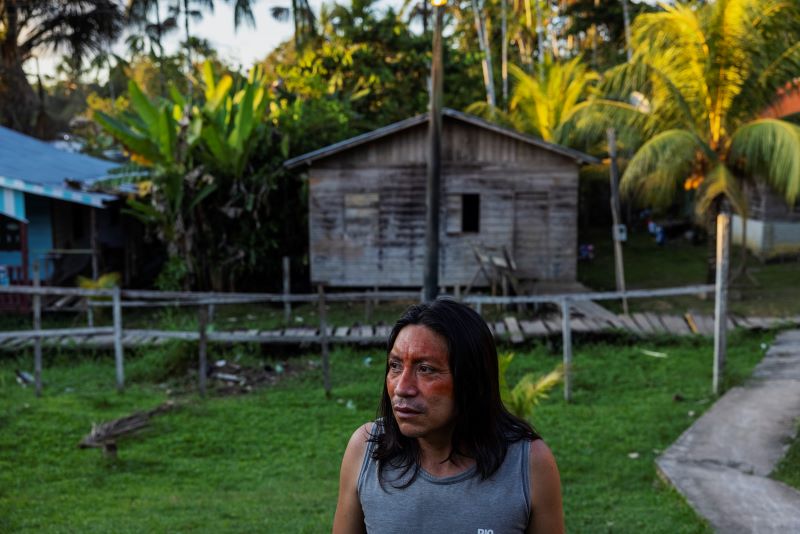 Pastor Marcos Mayoruna, aka Pepe, lives in Atalaia do Norte

In 2001 Pepe moved to Rio de Janeiro, 3,500 km far as the crow flies, as  as part of the Tikuna Project, created by indigenous evangelicals to provide their people with religious training. He spent eight years in Rio and was anointed as pastor in a seminary of the Assembly of God. Then he returned to the Javari Valley.

At first, says Pepe, he got involved with Christian missionary organizations that, to justify their presence in indigenous villages, distorted and exaggerated information about the increasingly rare practice of infanticide.

In 2010 he appeared in the documentary “Quebrando o Silêncio” (Breaking the Silence), telling a false story about his twin brother having been burned alive in the indigenous village when he was 10. Pepe admits he lied, but says he never authorized his testimony to be included in the documentary.

The video, that is available on the Internet, was released by the Atini Movement, founded by the minister for Women, Family and Human Rights, Damares Alves. The organization has been accused of kidnapping children under the pretext of saving them from infanticide. 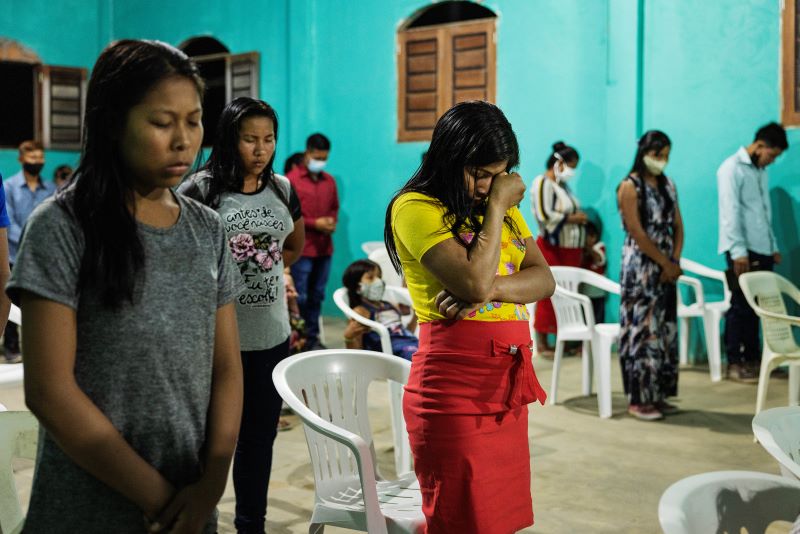 Pepe says he has been approached several times by American missionaries seeking his help to contact isolated Indians, but he refuses to cooperate.

“I always tell them that we can’t force anything. First, because contact hasn’t worked. Today we live on the riverbank. I would be in agreement if we, indigenous pastors, took education and health to these isolated peoples, but that’s not what these missionaries want. They want to make contact themselves and wish their own names to appear as those who made the first contact,” he says.

Pepe’s goal in Atalaia is to provide accommodation for the dozens of young indigenous people who leave their villages to complete their schooling. Many of them end up getting involved with drink and drugs. To escape from these evils they end up being attracted by the Evangelical churches, where they are encouraged to abandon their traditional practices such as the use of ayahuasca, caiçuma (fermented manioc drink), snuff and bodily ornaments. 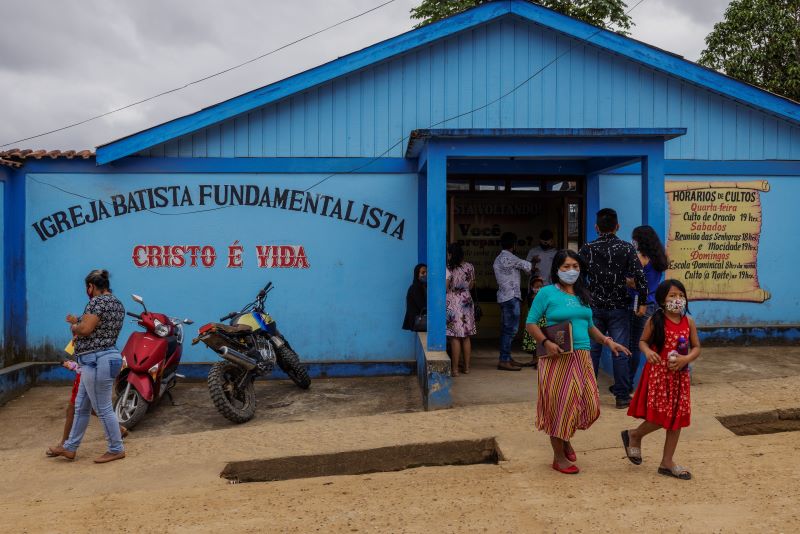 Two of Pepe’s nephews attend the Christian Congregation of Brazil, which follows conservative customs, with separate entrances for men and women. Having been converted, they wear their hair short and go to church in closed shoes, trousers and dress shirts.

“I tell them: don’t take what you have learnt in the church here back to your villages. One of them says he will wear a jacket and I ask him: how will you buy it? How will you use it in the village? If you’re a Mayoruna and become a Christian, you don’t change. That’s what you should take back to the village. Are you going to change the people’s food, the way they live in the village? You can’t do that.” 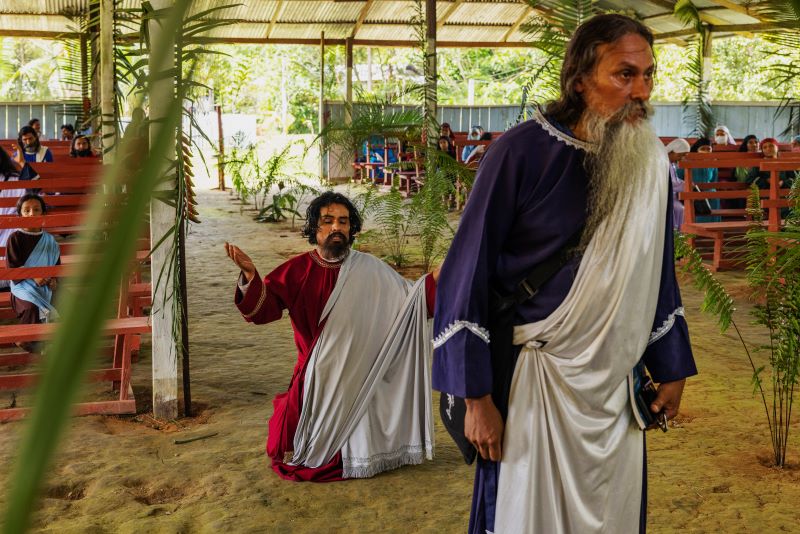 Followers take part in a religious service at the church of the Israelite Mission of the New Universal Pact, during a retreat for the faithful in the rural zone of Benjamin Constant, an hour’s drive from Atalaia do Norte

The American missionary Andrew Tonkin, better known as André, is an example of what Pepe is up against.

Obsessed with making contact with isolated Indians, Tonkin spent two years, between 2010 and 2013, living and circulating in the riverside community of São Rafael, on the Itaquaí River.

The location was strategic. Situated about two hours by boat from Atalaia, the small community built on stilts lies before the borders of the Javari Valley indigenous land. It was there that a group of isolated Indians began to roam frequently during the 1990s.

André lived a double life in São Rafael. In the community, he held services, fished and lived side by side with the village dwellers. “He came to do nothing but preach the word of the Lord. I didn’t hear him talk about the Indians,” says health worker Maria Pereira da Gama, 71, a resident of São Rafael. 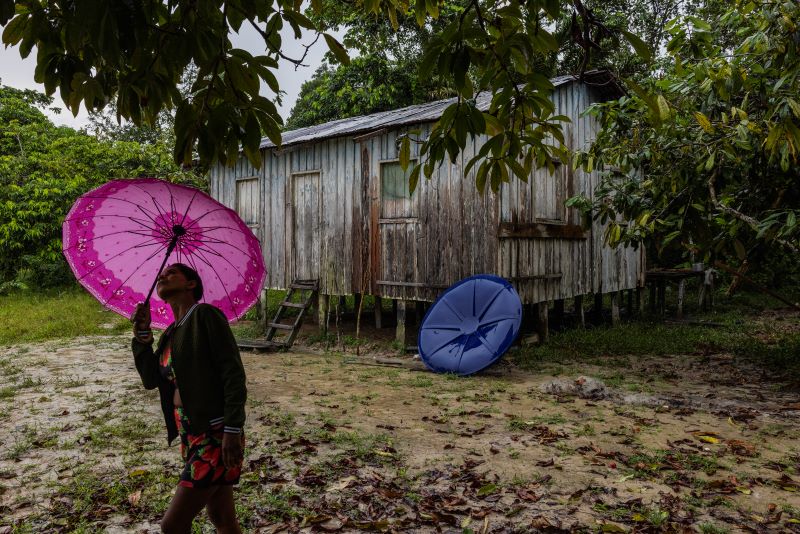 The house in which missionary Andrew Tonkin lived in the riverside community on the banks of the Itacoai river, close to the border of the Javari Valley Indigenous Land

At the same time, he tried to make contact with the isolated Indians. “I went twice with André in search of the Korubos. He wanted to take the word of God to them. He used to say: ‘It doesn’t matter if they kill me – I want to be among them’. He wanted to die with them,” says Laurimar Alvez, 45, aka Caboclo, who lives in the community.

After São Rafael, Tonkin, who at the time was linked to the missionary organization Frontier International, moved to the rural settlement of Estaca Zero, close to Benjamin Constant (in Amazonas state), another strategic – and less guarded — location for illegal entry into indigenous land.

From there, he appears to have organized a new expedition in 2019 in search of the isolated Indians. It was discovered only because Matis Indians came upon their encampment. 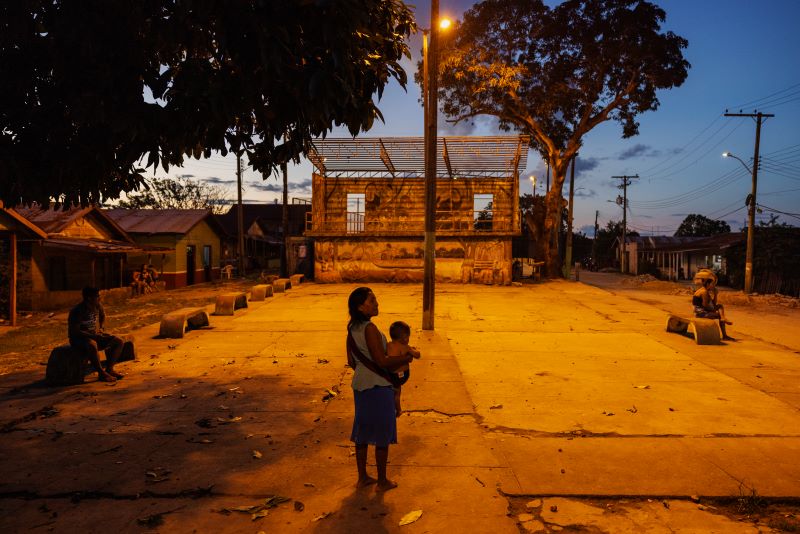 Last year, following a lawsuit brought by Unijava, the Federal Court banned Tonkin and two other missionaries, Josiah Mcintyre and Wilson Kannenberg, as well as the New Tribes of Brazil Mission (MNTB), from entering the indigenous territory.

In an email interview, Tonkin, who claims to have moved to the Middle East, said that he worked in Brazil during one decade with all peoples and races, including Colombians, Peruvians and indigenous peoples. Regarding the isolated tribes, he said that he explained his views to Brazil’s attorney general.

“I will continue considering the Supreme Sovereign and above all the King of the Universe, Jesus Christ. Jesus Christ is my Lord and Savior. He transformed me, He changed me inside out. He washed me away from all evil and sin, took away a hard heart and replaced it with a new creation. I hope you know him. He is the best friend you have. He is coming back for those who know him. Get ready”, he wrote.

“They follow the old storyline,” says Pepe, citing five Americans missionaries killed in 1956 by the Huaorani in Ecuador. “They want to die over here and make their name known. They want to become martyrs.”

This reporting is part of The Amazon under Bolsonaro, a collaboration between Folha De Sao Paulo and Climate Home News. The text was translated from Portuguese by Clara Allain. All photos by Lalo de Almeida. Hero image: A follower of the Brotherhood of the Cross prays in front of the church.