While proponents say results-based payments can support forest protection in the long term, critics say the Gabonese government has done little to earn the money 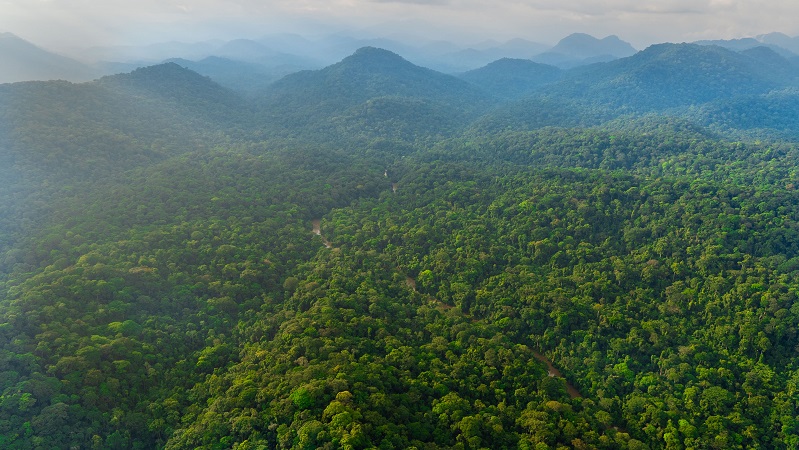 Gabon has become the first country in Africa to receive results-based payments for curbing deforestation under the Central African Forest Initiative (Cafi).

Based on expert assessments, the country was awarded $17 million from Norway through Cafi because of lower emissions from forest loss in 2016 and 2017 than the 2006-2015 baseline.

The payment is part of a 2019 agreement between Gabon and Cafi to provide funding worth $150m for reducing emissions from deforestation and land degradation over ten years. The scheme could eventually allow Gabon to sell its emissions reductions as credits on the carbon market.

But data by Global Forest Watch shows primary forest loss actually increased in 2016 and 2017, when deforestation reached its third highest level since 2001. The figures are not directly comparable with Cafi’s assessment as they use different methodologies and only account for tree cover loss. The data provided by Gabon to Cafi differentiates between deforestation due to industrial agriculture, forest degradation and emissions from logging.

Although deforestation rates in Gabon have been historically low, remaining below 0.1% annually for the past three decades, forest clearance rates have increased since 2011 as the government promoted the development of the palm oil industry to diversify its economy away from oil.

Cafi lead official Berta Pesti told Climate Home News that despite this increase in deforestation, Gabon’s data shows that overall forest-related emissions from 2010 onwards were lower than the previous decade.

That is partly because emissions from logging were reduced by about 40% between 2007 and 2012 through the implementation of sustainable forestry management practices, before rising again slightly in 2016 and 2017.

“Of course, if emissions continue to increase and exceed the ten year historical baseline, Gabon will not be eligible for any further payments,” said Pesti.

Illegal logging and poor timber harvesting techniques continue to be the largest source of forest-related emissions. 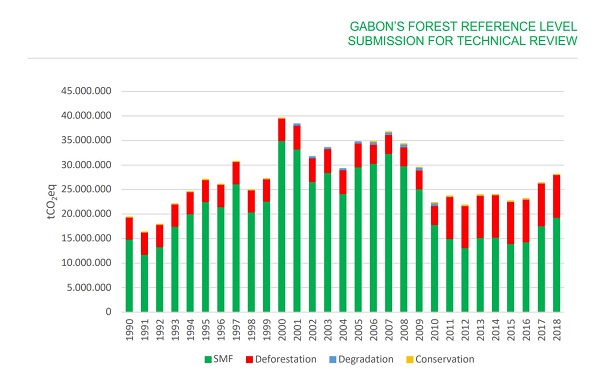 While Cafi and the Gabon government hailed the payment as an important first step for forest protection in the Congo basin, campaigners have urged caution.

Joe Eisen, executive director of the Rainforest Foundation UK, told Climate Home the payment was made “without the Gabonese government necessarily having taken any action whatsoever to reduce deforestation”.

“While increased finance for forests and the communities that inhabit them is urgently needed, this payment risks being as much a PR exercise as it is for actual and verifiable reductions in deforestation. If anything, this seems like ‘payment for non-performance’,” he said.

Wedged between Cameroon and the Republic of Congo on Africa’s west coast, Gabon is 88% rainforest by land area.

Since the early 2000s, it has created 13 national parks to protect its forests. In 2017, the government committed to cut emissions from forests in half by 2025 compared with 2005. And in 2019, it pledged to make all forest concessions environmentally certified by the Forest Stewardship Council by 2022.

“Gabon is a net absorber of a 100 million tonnes of CO2 every year thanks to our rainforest. That’s more than double Norway’s annual emissions,” Gabon’s forests and environment minister Lee White told a press conference this week.

“We’re trying to develop a new economic model. We’re going to create Gabonese jobs and Gabonese livelihoods on the back of our natural resources” in a way that preserves the carbon stocks and avoids deforestation, he said. “And Cafi is investing in that economic transition.”

“It’s very hard work protecting our forest and hard work requires money,” he said, citing “active management” through regulations and efforts on the ground to combat illegal logging and poachers. “Had we done nothing, we would not be in the position that we are in today.”

Proponents of the result-based payments say Cafi has emerged as a necessary scheme to incentivise forest protection in the long-term. In Gabon, the funds will be invested in sustainable forest management practices.

Rod Taylor, global director of World Resources Institutes’ forest programme, told Climate Home that countries with low deforestation levels and high forest cover, like Gabon, “have no sins to redeem from” and have a low potential for further reducing forest loss.

Taylor said those forest nations should be rewarded for maintaining their forests intact. “Gabon is a poster child for doing everything right in this field,” he said.

And while $150m alone won’t be enough to guarantee forest protection, the payment is “a sweetener” for a country that is already committed to protect its forests, he said.

But critics say the system is easily gamed by cherry-picking baselines, which risk delivering emissions cuts on paper only.

Marc Ona, executive secretary of Gabon-based NGO Brainforest, told Climate Home the payment isn’t the result of Gabonese policies to tackle deforestation but rather the starting point of an international programme designed by donor countries and multilateral organisations outside of Gabon.

An outspoken environmentalist, Ona described communication by Cafi over the project as “false advertising”, adding the 2019 accord between the Gabonese government and Cafi has in no way been responsible for a reduction in deforestation three years earlier.

“If we were going to reward the result of Gabon’s policies, then payment by results should start from 2019, when we are able to follow the evolution of the situation,” he said.

Ona added illegal timber exploitation had risen over the past three years, as a growing number of Asian companies, some with low environmental standards, dominate the logging business – an issue which the government says the first payment will be used to halt.

Eisen, of the Rainforest Foundation, said “a far more just and effective use of the climate funds” to reduce emissions from deforestation would be to use the cash to resolving the land rights of one billion people across the world who live in and depend on forests.

Between 2011 and 2020, less than 1% of climate funds went to projects supporting indigenous peoples and local communities land tenure and forest management, according to a recent study by the Rainforest Foundation Norway.

In 2013 and 2014, deforestation spiked in the county and nearly 55,000 hectares of primary forest were cleared, according to Global Forest Watch.

Between 2012 and 2016, Olam Gabon, a joint venture between Singapore-based company Olam and the Gabon government, cleared nearly 40,000 hectares of forests, according to conservation NGO Mighty Earth.

Following mediation between Mighty Earth and Olam, the company agreed to suspend further land clearing of rainforests in Gabon for palm plantations.  The accusations led to the Forest Stewardship Council (FSC) to open an investigation into Olam in May 2020, which is ongoing.

The government says that since 2014 it has made new palm plantations “extremely strategic” and only allowed the development of plantations “on highly degraded forest-agriculture mosaics and savannah areas”.