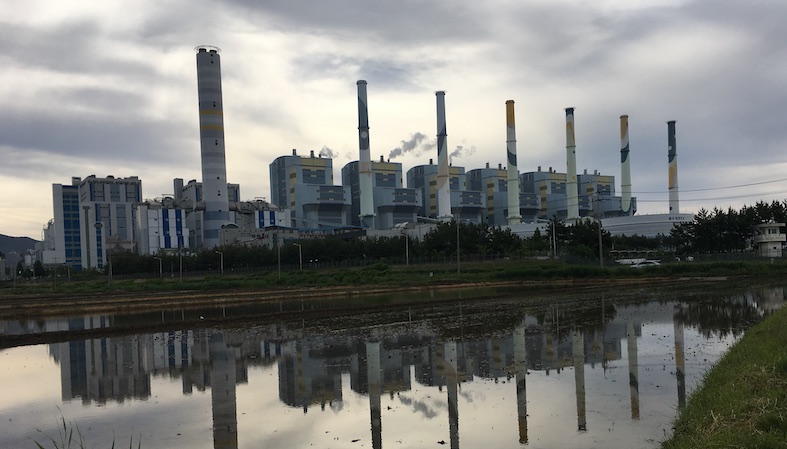 South Korea’s ruling party has proposed a target to cut greenhouse gas emissions at least 40% by 2030, compared to 2017 levels.

It is a significant increase in ambition for the coal-reliant Asian economy but does not match the recently updated targets of allies Japan and the US.

During a speech to parliament on Wednesday, the leader of the Democratic Party Song Young-gil said, “We must present a national greenhouse gas reduction target of at least 40% and implement it within eight years.”

He said that South Korea’s current goal of slashing emissions by 24.4% by 2030 “is absolutely low compared to developed countries”.

The national climate plan is due to be finalised for submission to the UN ahead of Cop26 climate talks in Glasgow, UK this November.

Campaigners said the proposed 2030 goal is not ambitious enough. According to Climate Analytics, South Korea should slash emissions at least 59% by 2030 as a fair contribution to the Paris Agreement.

“Considering that neighbouring Japan has announced [a national emissions target] of 46-50% below 2013 levels, Korea must do more in order to establish its climate leadership, especially as a candidate to host Cop28,” said Joojin Kim, managing director of South Korean campaign group Solutions For Our Climate.

Cop28 is the UN climate summit scheduled for 2023, when it is the turn of a country in the Asia-Pacific region to host.

Coal remains a big problem for the country. Coal fired power generation accounts for 40% of total electricity output. South Korea has not set a date for ending coal power and has 7.2 GW of coal capacity under construction, according to Global Energy Monitor data.

According to Climate Analytics, South Korea must phase out coal power by 2029 if it is to meet its obligations under the Paris Agreement. Kim said the 2030 proposal would likely trigger new coal exit discussions.

In November, the country’s council on climate and air quality recommended that the government consider phasing out coal by 2040 or earlier.

South Korea is investing in offshore wind and solar energy, but campaigners say growth is too slow. Renewables make up just 7% of the country’s electricity mix, the lowest share of any member of the International Energy Agency.

Renewables must increase seven-fold by 2030 and twenty-fold by 2050 to meet South Korea’s net zero goal, according to analysis by Solutions For Our Climate.

Under the new proposal, renewables would need to make up at least 40% of total electricity generation by 2030, Kim said.