The German chancellor resisted calls to announce an increased climate finance pledge at the Petersberg Climate Dialogue, her last before leaving office in September 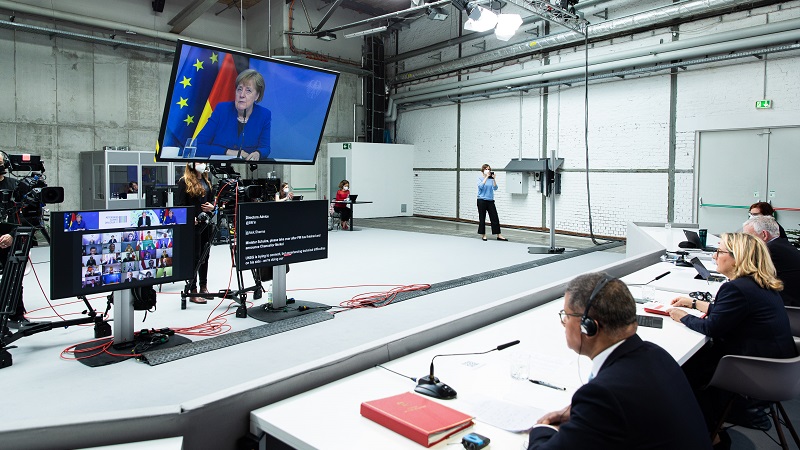 Angela Merkel brought a surprise increase in Germany’s emissions targets but no new money for the developing world to an annual climate ministerial this week.

How to mobilise climate finance and agree rules for a global carbon market were two of the main items on the agenda at the Petersberg Climate Dialogue, hosted by Germany and the UK. Neither yielded quick results.

Around 40 ministers participated in the online summit which is held every year to boost political cooperation in parallel with formal climate negotiations. Campaigners hoped Angela Merkel would use the summit to cement her climate legacy before stepping down as chancellor in September with a doubling of Germany’s climate finance pledge over the next five years.

The German chancellor launched the first-ever Petersberg summit 12 years ago and oversaw the first UN climate talks in Berlin in 1995, while she was environment minister.

While her government announced stronger emissions targets for 2030, 2040 and 2045 ahead of the dialogue, Merkel deferred the decision on finance targets.

In the closing session, Cop26 president designate Alok Sharma called on Germany and other members of the G7 group to bring enhanced financial commitments to the leaders’ summit of rich nations in June.

UK prime minister Boris Johnson reportedly urged Merkel ahead of the meeting to raise Germany’s contribution. Instead, she told ministers at the summit that Germany’s current pledge was a “fair amount and fair contribution”.

She added discussions over new finance pledges should be held during the Cop26 climate talks hosted by the UK in November, shifting the responsibility of scaling up Germany’s commitment onto the next government.

Internal dynamics in the German coalition government played a bigger role in Merkel’s decision not to increase climate finance than her relationship with the UK, Jennifer Tollmann, policy advisor at think tank E3G, told Climate Home.

It was “a wasted opportunity for Angela Merkel to show climate leadership in supporting international partners,” she said.

Merkel’s conservative CDU party and its junior coalition partner the Social Democrats were more likely to want “to save the win for coalition negotiations” following the election in September, she added.

Tollmann described the decision as “very short-sighted” for the CDU, which is trying to green its image in response to the electoral threat from the Green Party, and the opposition Social Democrats, who made international solidarity a cornerstone of their election manifesto.

Besides climate finance, ministers were aiming to make progress on contentious discussions to establish the rules of a global carbon market, also known as Article 6 of the Paris Agreement.

Deep divisions remain on the design of the market because of concerns of double counting and countries carrying over surplus credits from the previous trading scheme, established under the Kyoto Protocol.

Asked by Climate Home whether leaders had found a political compromise on some of the outstanding issues, Sharma said: “No, at this session in Petersberg we have not reached a consensus.”

Sharma said that he has instructed the environment ministers of Singapore and Japan, Grace Fu and Shinjiro Koizumi, to lead on Article 6 negotiations ahead of Cop26.

“Our ambition is that we close off all outstanding items in the Paris rulebook. There is a willingness for us to achieve that but clearly there are some hard miles to be put in to make sure that is possible,” Sharma said.

One of the things I stressed was the importance of agreeing to Article 6 of the Paris Agreement for the success of #COP26. #pcd12 #ClimateAction pic.twitter.com/Go61TMdty4

Campaigners told Climate Home the San Jose principles, which were drawn up at the climate talks in Madrid in 2019, should be a starting point for negotiations. This would rule out double counting and the use of old credits from the Kyoto Protocol era.

“The San José Principles have to constitute the minimum baseline to ensure environmental integrity,” said Ryfisch, of GermanWatch.

Brazil, China and India, all want to trade their old credits from the Kyoto era on the new market, to protect the value of previous investments.

Gilles Dufrasne, policy officer at Carbon Market Watch, told Climate Home the exclusion of old credits in the new system should be non-negotiable.

“We don’t want a deal at any cost. Either we get good rules which close all the loopholes. Or we don’t have rules. It’s not great because we have a market that is completely unregulated but it is better than coming up with some half baked deal,” he said.

“It’s not about finding a compromise and getting to a deal where everyone is happy. It’s about making sure that countries such as Brazil change their minds.”