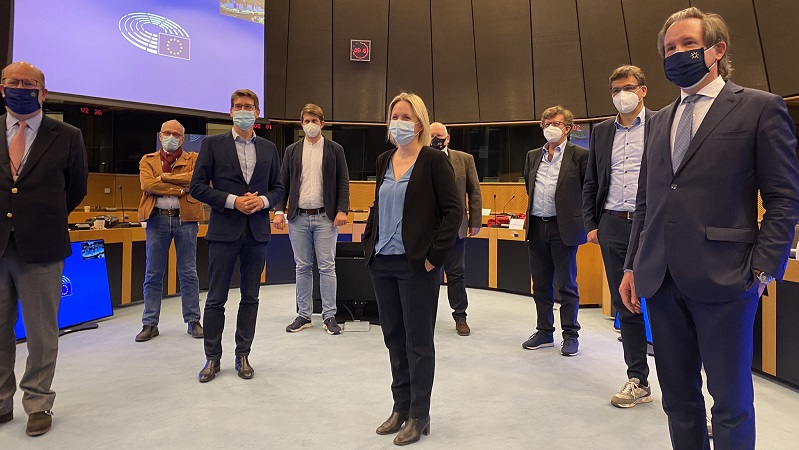 Negotiators from the European Parliament and EU member states pose for a picture after reahing an agreement on the Climate Law at 5am Wednesday (Photo: 2021Portugal.eu /Twitter)

European Union negotiators reached a deal on the European Climate Law after 14 hours of talks, allowing the EU to go into this week’s US-hosted climate summit with an agreement on the bloc’s 2030 target.

After a long night that finished around 5am on Wednesday, negotiators from the European parliament and EU member states reached an agreement on the European Climate Law that will enshrine the EU’s commitment to reaching climate neutrality by 2050.

As expected, the 2030 target was the big political fight of the night, but parties reached an agreement to reduce net greenhouse gas emissions by “at least 55%” by 2030, compared to 1990 levels. That objective will therefore also become a legal obligation for the EU and its member states.

While the 55% target is lower than the 60% that Parliament had earlier voted for, member states made a concession to European lawmakers by agreeing to cap the contribution of carbon removals from land use, agriculture and forestry.

In addition, the European Commission agreed to consider increasing the contribution of carbon sinks in order to bump up the EU’s climate ambition to 57%, although this is not written in the law.

#EUClimateLaw @2021PortugalEU @EUCouncil and @Europarl_EN reached today a provisional political agreement setting into law the objective of a climate-neutral EU by 2050. The EU climate law sets the frame for the EU’s climate action in the long term #EU2021PT pic.twitter.com/ZQa718CO7J

Bowing to parliament’s demands, EU negotiators also decided to establish an independent scientific advisory body, the European Scientific Advisory Board, to advise policymakers on the alignment of EU policies with the bloc’s climate neutrality goal.

The new body will consist of 15 members from across Europe, each nominated for a four-year mandate. It will provide scientific advice and report on existing and proposed policy measures and targets as well as greenhouse gas budgets. The European Environment Agency will act as its secretariat.

“We raised the ambition of the 2030 net target to almost 57%, we got the greenhouse gas-budget and the advisory board. We wanted more, but this is a good first step towards climate neutrality,” said Jytte Guteland, parliament’s lead negotiator.

As a result, the EU’s 2030 target translates into a “gross” reduction of 52.8% without carbon removals from agriculture and forestry.

The inclusion of carbon sinks into the EU’s climate goal caused jitters among the Greens who denounced the move as an “accounting trick” to meet the 55% goal for 2030.

“By failing to establish a serious climate target without accounting tricks in the European Climate Law, the Green Deal fails to live up to the big speeches of the Ursula von der Leyen Commission,” said Michael Bloss, the lead negotiator for the Greens in the European Parliament.

A win for parliament came on the 2040 target, which will be informed by a greenhouse gas budget, which determines how much carbon the EU can emit up to 2050 before it breaches the Paris Agreement. This will have separate calculations for emissions and carbon sinks.

The 2040 target will be proposed alongside the indicative greenhouse gas budget within six months of the first global stock-take of the Paris Agreement in 2023, at the latest.

Beyond 2050, EU negotiators agreed to strive towards reaching negative emissions.

However, national representatives in the Council of Ministers did not agree to make the 2050 goal a legal obligation for every EU nation . Instead, the 2050 climate goal will remain an objective for the EU to attain as a group, meaning some countries will be allowed to reach the objective later if others manage to decarbonise their economies sooner.

“Unfortunately, the Council was not ready to accept climate neutrality for every member state. It will remain a collective target,” Liese said.

EU negotiations also agreed that the European Commission would help create road maps for decarbonisation for industrial sectors that make a request for it. The EU executive will then facilitate dialogue, share best practices, and monitor progress.

European Commission president Ursula von der Leyen welcomed the announcement, saying she was “delighted” that a deal has been reached on the climate law.

I warmly welcome the agreement on the Climate Law.

Our political commitment to becoming the 1st climate neutral continent by 2050 is now also a legal one.

The Climate Law sets the EU on a green path for a generation. It is our binding pledge to our children and grandchildren.

Frans Timmermans, the Commission’s executive vice-president in charge of the European Green Deal, was equally cheerful, saying: “This is a landmark moment for the EU. We have reached an ambitious agreement to write our climate neutrality target into binding legislation, as a guide to our policies for the next 30 years. The Climate Law will shape the EU’s green recovery and ensure a socially just green transition.”

“Today’s agreement also reinforces our global position as a leader in tackling the climate crisis. When world leaders gather on Earth Day, the EU will come to the table with this positive news, which we hope will inspire our international partners. This is a good day for our people and our planet,” he continued, pointing to the value of the agreement for the EU on the world stage.

Pascal Canfin, the chairman of the European parliament’s environment committee, said the deal “: “Today, Europe confirms its leadership in the fight against climate change. Twenty-four hours before the climate leaders’ summit, we are further strengthening our European climate objectives thanks to a reduction in our emissions which will reach nearly 57% compared to 1990. Parliament was obviously ready to go even further, but the compromise found is ambitious: we are going to do two and a half times more in nine years than what we have done in the last 10 years in Europe.”

João Pedro Matos Fernandes, the Portuguese minister of environment and climate action, said: “We can be proud to have set in stone an ambitious climate goal that can get everyone’s support. With this agreement we send a strong signal to the world – right ahead of the leader’s climate summit on 22 April – and pave the way for the Commission to propose its “fit-for-55″ climate package in June,” he said.

The agreement will now be fine tuned by legal experts and submitted to a final approval from the Council and the parliament.