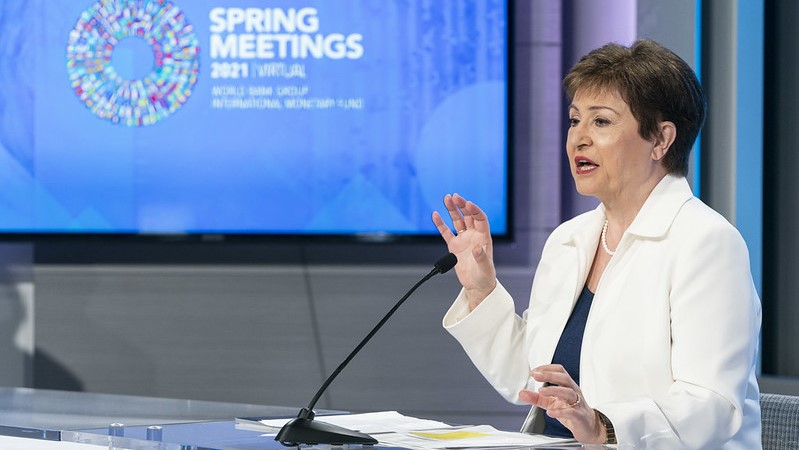 The head of the International Monetary Fund has urged rich nations to reconsider the criteria for developing countries to access international finance, saying vulnerability to climate shocks should be taken into account.

At the opening press conference of the IMF’s spring meeting, Kristalina Georgieva said income level was the primary consideration when disbursing international finance.

“But there are other sources of vulnerabilities, for example high vulnerability to climate shocks. And therefore the international community should look into other factors of vulnerability as we think of appropriate ways to support developing countries,” she said.

Her comments came after G20 finance ministers agreed to extend a debt repayment holiday for poor countries beyond June to December 2021.

A total of 73 low income countries are eligible for the temporary suspension of debt service payments owed to official bilateral creditors. This excludes most debt-laden middle-income and emerging economies.

Ministers declined to expand the initiative to middle-income countries such as small island states in the Caribbean. There, nations are facing ballooning debt levels as the costs of Covid-19 and climate impacts mount and tourism revenues plummet.

In a statement published following the meeting, the Alliance of Small Island States (Aosis) said the extension of the debt repayment pause “only goes some way to solving the huge debt issues Covid-19 and climate change have served up to island nations”.

“More than half of the world’s small island states don’t even qualify for this debt relief, due to outdated and illogical criteria,” said ambassador Aubrey Webson of Antigua and Barbuda and Aosis chair.

“We are squeezed on all sides, yet due to the arbitrary designation of ‘middle-income’ status, many of us are told that we do not need assistance. This is ludicrous in a year when our debt-to-GDP ratios are beyond maxed out and when even in the best of times, a hurricane can easily wipe out an entire year’s GDP in one fell swoop,” he said.

Belize, for example, was locked out of the scheme despite facing debt levels of 126% of its GDP.

Aosis called for the debt repayment holiday to be extended beyond 2021 until a “fairer, more inclusive system” is agreed.

An assessment by the World Bank and the IMF, seen by the New York Times, described the combination of debt, climate change and environmental degradation as representing “a systemic risk to the global economy” that “exacerbates climate and nature vulnerabilities”.

Georgieva said she was concerned about middle-income countries that have entered the crisis with high debt levels and whose limited fiscal space has meant they haven’t been able to invest in a resilience and a green recovery.

“Middle-income tourism-dependent countries are in a very difficult position. We are of course concerned how we rally more support so they can be [on a] more prudent path to recovery,” she said.

UN secretary general António Guterres told a press conference last week additional liquidity in the economy was urgently needed to support the most vulnerable countries. “We cannot walk head on, eyes wide open, into a debt crisis that is foreseeable and preventable,” he said.

G20 finance ministers have backed calls for the IMF to issue $650 billion of special drawing rights (SDRs) – an IMF reserve asset that has only been issued four times before to respond to crises.

The cash is traditionally allocated according to the size of countries’ economies. Vulnerable nations have urged richer countries to donate or redistribute some of their SDRs, to help them afford vaccines and a green recovery.

Georgieva said the IMF was working on a proposal for issuing the crisis funds to present to its executive board, which is made up of member states, “some time in June”. In parallel, she said, the IMF was “identifying viable options for using SDRs from wealthier members to support our more vulnerable countries”.

The IMF has received a number of proposals for doing so. This includes calls for ensuring middle-income countries that have been locked out of the debt payment suspension scheme receive more support. Argentina and Mexico are among the nations calling for urgent relief.

Georgieva said the IMF will assess these ideas and ensure they are “defined on the basis of contributing most effectively to the needs of vulnerable countries”.

“We will discuss with the members whether there is enough support to expand the concessionality of re-allocated SDRs beyond low-income countries. How we define these options is work to be done intensively in the next months,” she said.