The process of providing land deeds to communities started by former slaves was already slow before Jair Bolsonaro, but the president’s vow not to demarcate “a single centimetre of land” for indigenous communities has completely stalled progress.

Throughout the 18th century, several communities of former slaves settled on the banks of the river Guaporé, which marks the current border with Bolivia. They survived attempts to capture or kill escaped slaves, the arrival of rubber tapping barons and the settlement of the Amazon state Rondônia during the military dictatorship.

The 1988 Constitution gave quilombolas (escaped slaves or their descendants, whose settlements are the quilombos) the right to regularize their land tenure.

But the process has been slow, is far from concluded and clashes with a campaign promise made by president Jair Bolsonaro who pledged not to demarcate “a single centimetre of land” for the benefit of quilombolas or indigenous communities.

In Rondônia, only two of the eight communities certified as quilombos by the Palmares cultural foundation have received land deeds from the government’s agrarian reform institute (Incra), in both cases before Bolsonaro became president. The situation in the state follows the national average: only 9% of the quilombola communities, 317 of the total 3,465, in Brazil have been regularized.

The rules have not changed; the lack of regularization is mainly due to a sharp fall in the budget for fieldwork and land compensation payments, that began in 2015, under the presidency of Dilma Rousseff. 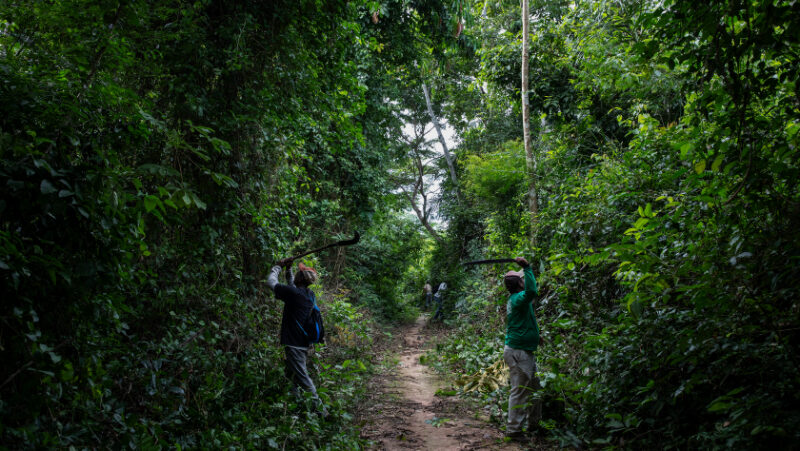 Residents of the quilombola community of Pedras Negras, in Rondônia, prepare a path to transport their brazil nut harvest. (All photos by: Lalo de Almeida/Folhapress)

Under Bolsonaro, Incra has partially regularized the lands of two quilombola communities, Invernada Paiol de Telha, in the state of Paraná, and Rio dos Macacos, in the metropolitan region of Salvador, where there is a land dispute with the naval base of Aratu.

After a public civil action filed by the non-profit organisation Terra de Direitos, the Federal Court instructed the Bolsonaro government to pay indemnity for private lands held within Paiol da Telha in southern Brazil. As a result, Bolsonaro signed a law in November 2020 transferring the sum of 26,717,063 reals (£3,352,030) to Incra.

According to Incra, there are 29 incidental rural properties situated within quilombola territories awaiting indemnity payments, with the total value estimated at 25,7 million reals (£3,225,350). With the resources for damages outlined in the 2020 budget, it would take nine-and-a-half years to cover this amount.

But the bottleneck is actually much bigger than that. There are 1,806 land title proceedings pending at Incra, 617 of them in Brazil’s Legal Amazon, which covers all nine states in the Amazon basin, including Mato Grosso and part of Maranhão.

“Our problem is called Incra. There are no large ranchers or anybody else here; we are on federal government lands, there is no conflict,” said quilombola Apolônio França Neto, president of the association of the Pedras Negras community, whose regularization process has been dragging on since 2005. “Our president said he would not give an inch of land to quilombolas and he’s keeping his promise, unfortunately.” 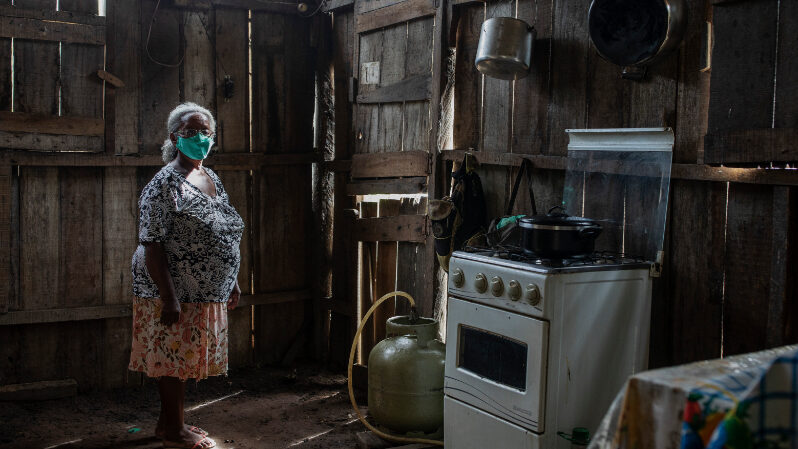 Community leader Mafalda Gomes in her home in the quilombola community of Santa Fé, in the valley of the Guaporé River, in Rondônia.

Pedras Negras, which can only be reached by boat or plane, was identified as a quilombola community by historian Marco Teixeira, of the federal university of Rondônia. His work traces the black inhabitants of Guaporé back to Africans who were brought to the area by the Portuguese in the 18th century as part of the colonial tripod of mining, slavery and military occupation of the border regions.

The discovery of large gold deposits in the region led the Portuguese to build Vila Bela da Santíssima Trindade, on the upper Guaporé River. Founded in 1752 on the banks of the Guaporé, the town was the first capital of the state Mato Grosso.

Decades later, the Portuguese strengthened their presence by building the imposing Real Forte Príncipe da Beira, inaugurated in 1783 after seven years of work by enslaved workers and freemen. With a perimeter of around 900 metres, the fort, situated hundreds of kilometres north of Vila Bela, is the largest colonial building in the Amazon region.

Teixeira reckons that 10,000 Africans slaves were brought to Guaporé over 50 years. Very soon they formed the vast majority of the non-indigenous population in the area. According to Teixeira, the abysmal working conditions in the region led to a sky-high mortality rate. Enslaved workers who did not run away died on average six months after arriving. 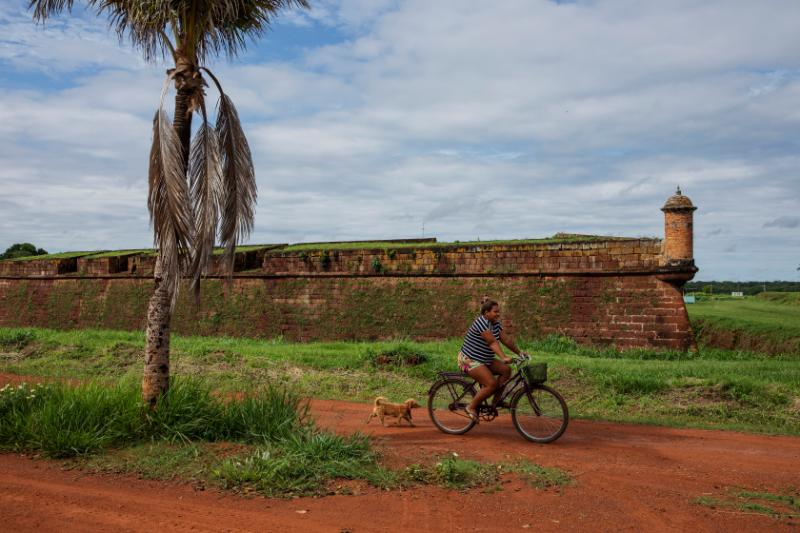 A resident of the quilombola community of Forte Príncipe da Beira, in the Guaporé river valley rides her bike in front of the military fortress built in the 18th century.

The peak of slave traffic to the Amazon region occurred from 1800 to 1810, a period in which 10,927 enslaved people landed there, according to the book “The People of the River”, by historian Oscar de la Torre from the University of North Carolina.

“The narrative that the Amazon region has no black people nor had slavery was promoted for a long time,” said Givânia Maria da Silva, from the national organisation of Quilombola communities (Conaq).

She says that slavery in northern Brazil created different models from what was found in northeast and southeast Brazil. For this reason the local quilombola communities have features in common with the traditional Amazonian settlements, such as the interaction with rivers and the use of large stretches of land.

After the gold ran out and the military abandoned the fort, decades went by without the region attracting strategic interest, until the start of the natural rubber cycle, in the late 19th century, when quilombolas began to work for rubber tapping barons from outside the region. But the Amazonian rubber lost economic importance after the second cycle, which came to an end during World War II. 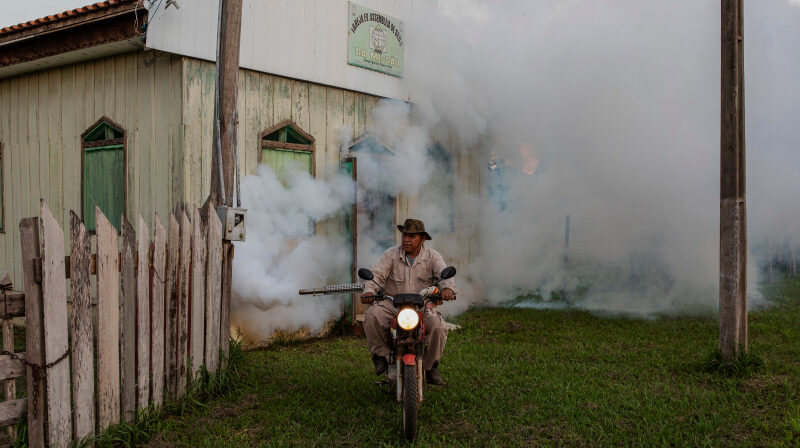 The most recent pressure began in the sixties and seventies, with the arrival of settlers from Rondônia. Disputes over land, the decline of river navigation and a lack of schools led hundreds of families to leave the quilombola communities and move to the city.

“The community was cut off from roads, but not from the river, since the boat passed through. We knew the days boats were coming, the right times, we had radios for communication and we produced manioc flour and rubber,” said civil sector worker Juracyr Nogueira de Menezes, 55, formerly of the Santo Antonio community.

“We don’t get any help. There has been no electricity supply in Santo Antonio since November. In the times we live in, it’s hard for people to remain there,” Menezes said. “And many young people who have no support for living in towns end up following the drug route, the easiest one, and wind up dead or in jail,” he added.

Emptied of inhabitants, Santo Antonio is one of six communities waiting to be regularized. The few remaining families mainly produce meals made from cassava. Without electricity, there is no internet connection. To make matters worse, the public telephone had been out of order for two months when we visited the community in late January.

The problematic situation in Santo Antonio centres around the biological reserve of Guaporé, which was created in 1982. The conservation unit, in which no type of human occupation is allowed, covers the entire quilombola territory, ignoring the residents who have lived there for over 200 years. For the quilombolas’ land to be regularized, Incra has said that it will need to be disengaged from the biological reserve. This would have to be done via a bill approved by congress – an unlikely prospect. 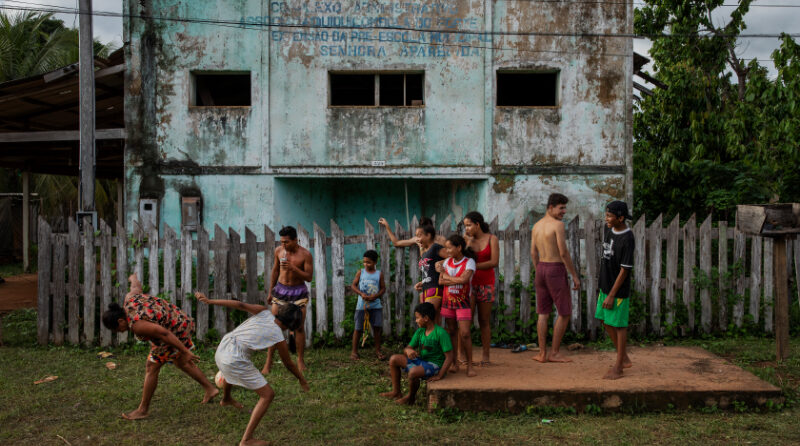 Children of the quilombola community of Forte Príncipe da Beira watch a game of football in front of the old community association house.

In Pedras Negras, members of the community say that because they have no formal title deeds, they are unable to legally sell their Brazil nuts. They prefer to sell the nuts to Bolivians on the other side of the river – an activity that has been targeted by the police. Another income source they have is fishing tourism, with fishing lodges managed by the quilombolas themselves. Incra says the regularization process has reached the stage of publication of the decree of recognition, but no date has been set for its conclusion.

In the Forte Príncipe da Beira community, 25 km by dirt road from Costa Marques in Rondônia, the territorial conflict pits the residents against the army’s first special border platoon (PEF). The quilombolas, who are neighbors of the historical building and the barracks, say the military began persecuting the community after the decision was made to regularize the area as a quilombola territory, at the start of this century.

There have been countless incidents over the last few years, from a ban on starting new vegetable planting to efforts to halt the sale of Brazil nuts to Bolivian buyers. Coexistence has improved since 2019, when the conduct adjustment term was signed, mediated by the courts and by the federal public prosecution service. But the title deed remains uncertain. 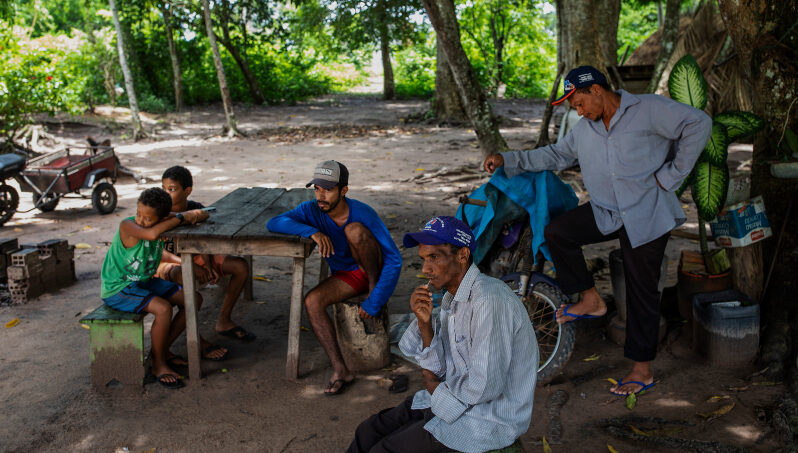 Residents of the Santo Antonio quilombola community get together to chat in the shade of trees.

“It is a border region, an area of great interest for military activities aiming to ensure the integrity of the national territory. The army does not oppose regularization of the situation of the area’s occupants. However, due to it being a border region, the interests of Brazilian territorial defence need to be harmonized with the need for regularization in question,” said a spokesperson for the army.

Incra said that a technical identification and delimitation report was concluded at the end of 2020 and is being analysed by its legal office.

“Right now, the military tolerate us. It’s not that they accept us, nor that they are being nice,” said Elvis Pessoa, the president of the quilombola association and son of a Brazilian father and Bolivian mother, a common arrangement in the region. “There’s a decree signed by their team saying it must be so,” he said.

This reporting is part of The Amazon under Bolsonaro, a collaboration between Folha De Sao Paulo and Climate Home News. Monica Prestes contributed reporting from Manaus. Translated from the Portuguese by Clara Allain. Hero image: Aerial view of land inhabited by quilombolas, the descendants of runaway slaves, on the banks of the Guaporé River, in the Amazon state Rondônia.