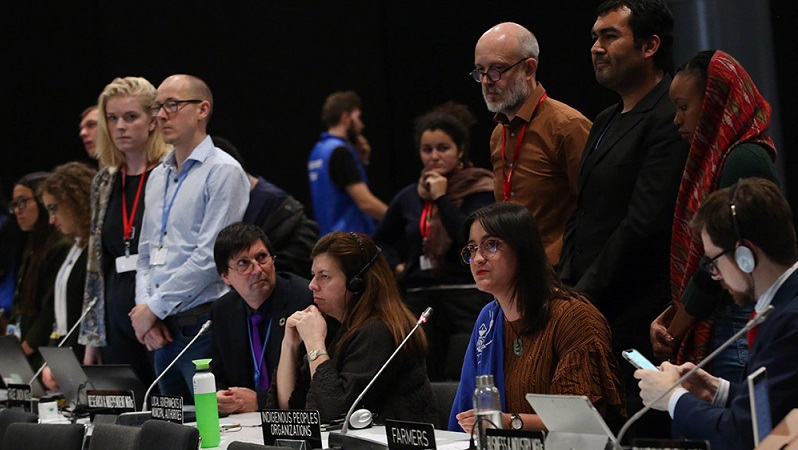 Climate negotiations could face further delays as the coronavirus pandemic risk remains too high for meeting in person and key officials do not agree to taking formal talks online.

A stalemate emerged on Thursday evening at a meeting of the 11-member UN Climate Change bureau on how to proceed with preparatory negotiations ahead of the Cop26 summit in Glasgow, UK, in November. Members agreed to consult further and defer a decision to the next meeting at the end of March.

The biggest resistance to holding talks online comes from the “like-minded” group of middle-income countries, according to sources with knowledge of the meeting. Among them, representatives of Iran and Pakistan asked for more time to consult with their governments over how to proceed.

India told a UK Cop26 briefing this month that “virtual negotiations should not replace in-person negotiations”, citing the risk of “disadvantages to many, many developing countries”.

The main objection is that poor internet connections could make it hard for negotiators in developing countries to fully participate. Time zone differences are also an issue, as some participants will have to work in the middle of the night.

While negotiators have held consultations and informal discussions on some key issues, no formal talks have been held since December 2019 in Madrid, Spain.

In a letter dated 25 February and seen by Climate Home News, they expressed “concerns with the current pace of progress in our deliberations”.

“Whilst virtual deliberations are never the preferred option, they are our only option to reach successful conclusions of our negotiations in Glasgow. In doing so, we must do all we can to uphold the principles of inclusivity, transparency, and representation,” they wrote.

This could include leaving time between negotiations to allow for groups to coordinate and holding deliberations over a variety of time zones to avoid favouring one regional group over another, they said.

The interim talks which happen every year between UN climate summits are usually held in Bonn, Germany, where UN Climate Change is headquartered.

Initially scheduled for June 2020, the meeting was tentatively moved to October 2020 because of the pandemic, before being postponed again to unspecified dates this spring.

This meeting is expected to make progress on the last unresolved issues of the Paris Agreement rulebook, which are three years overdue. Climate diplomats have yet to agree the rules of a new global carbon market, the transparency framework for reporting emission reductions and a common timeframe for countries’ climate plans.

In a letter to chairs of the negotiating groups, UN Climate Change executive secretary Patricia Espinosa said the secretariat had “made every effort to support parties in maximising progress and minimising delay” since the start of the pandemic.

It remained “committed to facilitating transparent and inclusive intergovernmental negotiations towards a successful outcome at Cop26,” she said.

In a briefing note sent to countries ahead of the meeting, the secretariat summarised solutions used by other UN bodies to continue to make progress, including through hybrid summits, streamlined agendas for online sessions and detailed guidance to facilitate decision-making in virtual formats.

Carlos Fuller, climate negotiator for Belize, told Climate Home he was confident preliminary talks would happen virtually in June and that the secretariat would overcome existing concerns.

“The only challenge is how to capture outcomes,” he said, adding that a preferred option would be for any decisions to happen in person.

Richard Klein, senior research fellow at the Stockholm Environment Institute, is part of a small group of researchers asking what it would take to move climate negotiations partly or fully online.

“I think it’s feasible but not sure it’s feasible this year,” Klein told Climate Home. On a technical level, issues around connectivity are challenging but can be resolved while time differences remain “one of the biggest hurdles”.

It is as much a political issue as a practical one. The “like-minded” countries that have opposed virtual talks “turn up to Cops with very large delegations that gives them an advantage and a power that is not as visible if the sessions are held online,” Klein said.

The project, which is funded by the Swedish ministry of environment, takes a longer view than Cop26 and is expected to present a final report in June.

Uncertainty over interim talks will raise further questions over the fate of Cop26, due to be held in Glasgow, UK, on 1-12 November.

The UK organisers maintain they plan to hold in-person negotiations in Glasgow. Responding to questions from UK lawmakers on Wednesday, Cop26 president designate Alok Sharma said his team was “taking into account contingencies”.

Asked how he would ensure that every nation is able to fully participate, Sharma repeated the UK wanted to make the event “the most inclusive Cop ever” but dodged a question about whether vaccination will be required of delegates.

Access to vaccines is raising growing concerns among developing country diplomats, who want to know whether Covid-19 jabs will be a prerequisite to attending Cop26.

Antigua and Barbuda’s UN ambassador Walton Webson has previously warned Sharma that UK and UN organisers needed to ensure negotiators from developing countries have “an equitable opportunity to be vaccinated ahead of Cop26” if the meeting is to be held in person.