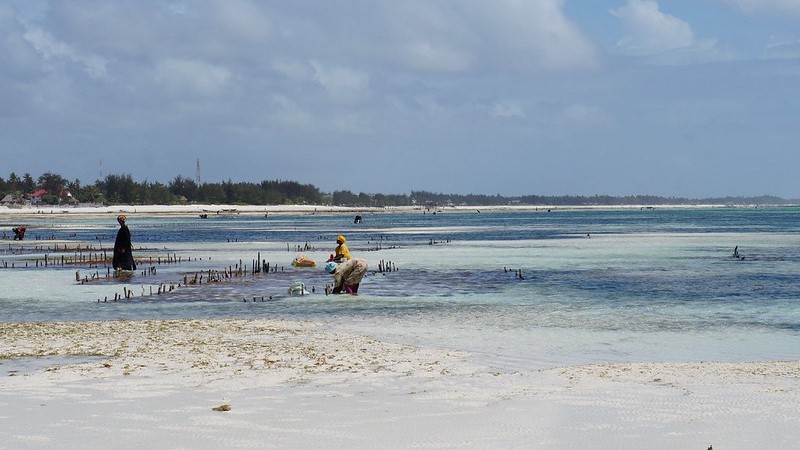 Women farm seaweed off the coast of Zanzibar, Tanzania. Sustainable seaweed farming projects are being funded by the GCF. (Photo: Jenn/Flickr)

Climate campaigners in the US have called on Joe Biden’s administration to deliver $8 billion to the Green Climate Fund.

The fund was created by the UN to support poor countries, that are not historically responsible for causing the climate crisis, to cut their emissions and cope with climate impacts.

In a letter signed by 46 NGOs, including 350.org, ActionAid, Greenpeace and Oxfam, campaigners wrote: “As the world’s largest historical greenhouse gas emitter, it is both a legal obligation and a moral imperative for the United States to provide finance for developing countries.”

The US owes $2bn to the fund after Donald Trump reneged on a pledge to deliver $3bn to the fund under Barack Obama. Obama’s administration had only transferred $1bn before Trump withdrew US support.

Speaking during a high-level summit on climate adaptation last month, US presidential climate envoy John Kerry promised the US would “make good on our climate finance pledge”. He stopped short of announcing a new commitment.

Campaign groups say the Biden Administration should commit another $6bn to bring the US in step with other donor countries, which doubled their contributions to the fund during its first replenishment in 2019.

At the time, 13 countries, largely European nations together with the UK, South Korea and New Zealand, announced a doubling or more of their contributions to the GCF to help fund green projects for the 2020-2023 period.

But with no contributions from the US, Russia or Australia, the total raised was only $9.8 billion, less than the fund’s start-up capital. As of December 2018, the GCF had identified a $15bn pipeline of projects.

The letter, sent to the White House, added the US has “a duty to ensure that climate finance supports the most vulnerable communities and avoids projects that further entrench fossil fuel infrastructure, such as carbon capture and storage”.

In addition, it called on the US to provide $400 million over four years to the Adaptation Fund. Campaigners described it as “the quickest fund at delivering funding to communities in need”.

The funding requests do not represent a fair share of what the US should do to address the climate crisis but “it is an essential and immediate starting point for the US to build on in the future,” they wrote. Doing its fair share requires the US to reduce emissions at home and provide grant-based funds to support poorer nations, they added.

Kerry has promised to “significantly increase” the flow of finance to adaption and resilience initiatives, which he said would include concessional financing, which usually refers to loans with more generous terms than the market rate. It remains unclear what share of finance will go to adaptation versus mitigation projects and how much of it will be grant-based.

Adaptation finance represents only about a fifth of all climate finance, according to the latest data analysis by the Organisation of Economic Cooperation and Development (OECD). And the share of loans has risen with developing nations expected to pay back nearly three quarters of all the climate money they receive, according to the same 2018 dataset.

Anti-poverty charity Oxfam has previously warned climate finance was adding to the debt burden of vulnerable nations, at a time when debts levels are ballooning as countries respond to the economic downturn caused by the coronavirus pandemic. Oxfam described the “excessive use of loans” in climate finance as “an overlooked scandal”.