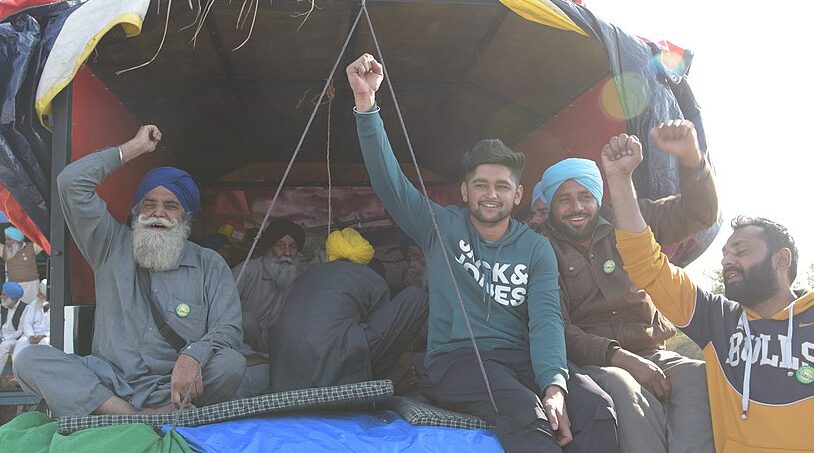 Tens of thousands of farmers are camping outside India’s capital Delhi, in protest at three agricultural laws they say will destroy their livelihoods and leave them at the mercy of large corporations.

Farmers from the northern states of Punjab and Haryana are demanding the government repeals laws passed in September that introduced market reforms on the sale of crops. They have organised a nationwide protest on 6 February, when they plan to barricade major highways for several hours. In recent weeks tensions have escalated, with violent clashes between police and farmers.

The government says the new agricultural laws will enable farmers to set their own prices and sell their crops to large companies, such as supermarket chains — doing away with government-regulated wholesale markets where farmers are guaranteed a minimum price.

Changing weather patterns, coupled with unsustainable practices, have led to failed harvests and shrinking incomes for millions of families across the country.

The protestors fear government reforms will allow companies to drive down prices, making it even harder for them to make a living.

Agriculture is the primary livelihood for around 58% of India’s 1.3 billion population. The average annual income of a farming family in over half of India’s states was a mere 20,000 rupees ($271) in 2016, according to an economic survey.

“Farming has become a loss-making proposition. As a result farmers who provide for the entire nation are heavily indebted. Not only are they at the mercy of banks and loan sharks, but also the vagaries of weather and the market,” the All India Kisan Sangharsh Committee, which represents over 150 farming unions, said in a statement.

“Weather patterns are changing and the monsoon is becoming more unpredictable,” Debajit Palit, a director for rural energy at The Energy and Resources Institute in Delhi, told Climate Home News. “You used to know how much rain would happen on a given day. Now it suddenly rains so much that there is a flood.”

A 2017 study published in the journal Nature found that extreme rainfall events tripled between 1950 and 2015 — a trend that scientists have linked to global warming. Charity Christian Aid estimated intense flooding in India between June and October 2020 cost $10 billion.

Unpredictable weather patterns have forced farmers to delay their harvests, bore deeper into the ground to extract water and intensify their use of toxic fertilisers, said Palit.

In Punjab, known as India’s “bread basket”, farmers have access to free electricity to pump water for irrigation. Without having to bear the cost of energy, they have dug deeper into the water table.

An electricity cap could incentivise farmers to use energy more efficiently and diversify their harvests beyond water-draining crops such as rice and sugarcane, said Palit.

“When the farmers start paying, they will start valuing the electricity,” he said, adding that farmers should receive welfare benefits in return.

Switching to less water-intensive crops such as maize and millet is the only way to reverse the damage and create a more sustainable agricultural system, Palit added. India’s ministry of agriculture has previously identified pulses and oilseeds as alternatives to the common rice-wheat cropping system.

“It will be best for farmers and the environment as a whole to shift away from paddy cultivation to other high value crops,” he said.

Crop diversification would also solve the issue of stubble burning, which farmers do to quickly clear the soil for the next growing season. Farmers in northern India burn an estimated 23 million tonnes of straw from their rice harvests every year, according to the International Maize and Wheat Improvement Center. Stubble burning in Punjab and Haryana shrouded Delhi in smog in recent years, sparking a public health emergency.

Youth climate activists from around the world have expressed their support for Indian farmers on social media.

Swedish activist Greta Thunberg wrote on Twitter: “We stand in solidarity with the #FarmersProtest in India.” She shared a “toolkit” of advice to those taking part in the protests.

I still #StandWithFarmers and support their peaceful protest.
No amount of hate, threats or violations of human rights will ever change that. #FarmersProtest

Ugandan youth activist Vanessa Nakate also spoke out in support of the protests.

The people united will never be defeated #FarmersProtest

Earlier this week Delhi authorities imposed a 48-hour internet shutdown in response to the farmers’ protests.

US vice-president Kamala Harris’ niece, Meena Harris, condemned the standoff between police and farmers on Twitter.

“We all should be outraged by India’s internet shutdowns and paramilitary violence against farmer protesters,” she said.

Meanwhile in the UK, farming union the Landworkers’ Alliance wrote a public letter, calling on the government to support Indian farmers by banning the export of pesticides and engaging directly with farming unions in India.