Xie Zhenhua’s return to climate diplomacy is seen as a ‘bright spot’ for US-China cooperation, given his strong relationship with US special climate envoy John Kerry 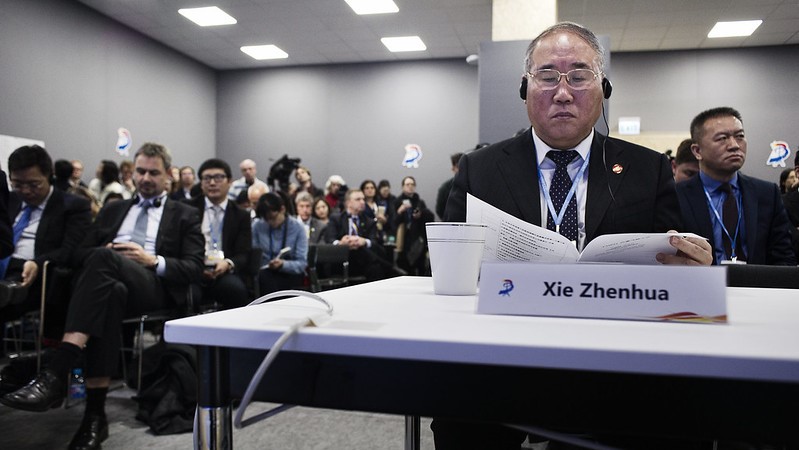 China has reinstated Xie Zhenhua, one of its most respected climate experts and broker of the Paris Agreement, as climate envoy.

The move is widely seen as a response to US president Joe Biden’s appointment of John Kerry as his special presidential climate envoy and a signal of Beijing’s willingness to engage with Washington on climate.

Xie is a veteran climate negotiator well known on the international stage and with a deep understanding of the Chinese government’s inner workings.

From the failed 2009 climate talks in Copenhagen to the 2014 US-China deal that underpinned the Paris Agreement a year later, the two men developed a strong and personal relationship, while Kerry served as Secretary of State under the Obama administration.

Climate Home New has learned that Xie and Kerry have been in contact in recent days and discussed energy and climate policy.

“This is clearly a tailored move towards the US, an effort to ensure the diplomatic channels are there. With his experience and contacts, Xie’s appointment will at least help reduce transactional cost in China’s climate diplomacy,” said Li Shuo, of Greenpeace East Asia.

While Xie’s appointment has not been publicly announced, sources say officials at the environment ministry have confirmed the move.

News of his appointment was also shared during a high-level seminar, attended by former UN chief Ban Ki-moon, on climate and environmental cooperation in the Himalayan region on Tuesday, Climate Home understands.

Xie led China’s climate negotiation team from 2007 to 2018 and served as the country’s climate envoy until early 2020. Since then, he has remained a special advisor for climate change to the government and presided over the Institute of Climate Change and Sustainable Development at Tsinghua University.

At 71, Xie is well beyond the usual retirement age of 60 for Chinese bureaucrats, making his return to diplomacy all the more striking.

“Xie Zhenhua has been a very important figure in the development of climate policy domestically and internationally, especially in terms of the getting climate change to move up the state policy agenda in China,” Sam Geall, acting CEO of China Dialogue, told Climate Home.

“I don’t know anyone who has risen to this level of political personality. No one has been so outspoken and entrepreneurial since him. I can’t imagine who else could have taken that role. There is no-one else waiting in the wings,” he said.

The scope of Xie’s role is not yet clear, but it is understood he will represent China in key multilateral climate talks and play a critical role in bilateral climate engagements.

But after four years of Donald Trump, the political realities of US-China have changed significantly since Xie and Kerry last worked together, he said.

Last week, Chinese foreign ministry spokesperson Zhào Lìjiān warned climate change cooperation with the US would not stand in silo from the broader bilateral relationship, where trade and human rights raise tensions — a direct response to Kerry’s suggestion that climate cooperation with China was a “standalone issue”.

And China’s tone on the issue softened this week. Spokesman Wang Wenbin said Beijing and Washington had “great space for cooperation in addressing climate change” and that “China-US cooperation can accomplish many great things that benefit both countries and the world at large”.

Thom Woodroofe, a senior advisor at the Asian Society, said Xie’s appointment was “an incredibly important signal” for the US and China being able to find ways to talk to each other about climate action.

Xie and Kerry’s strong relationship means they can “get started on climate diplomacy and trust building and be able to have those conversations without being derailed by wider US-China tensions,” said Geall.

Geall added that during the Trump presidency Xie was in contact with a number of US states and governors who remained committed to climate action, including former New York mayor Michael Bloomberg and former California governor Jerry Brown. In many ways Xie understands the US domestic mood, he added.

“The only question is whether political appetite for a substantive move is still there,” said Li, of Greenpeace. “The bottom line for solving the climate problem is that the two biggest emitters in the world need to talk, if not holding each other’s hand.”