John Kerry’s attempt to isolate US climate cooperation with China from more contentious issues like trade, finance and human rights is a non-starter 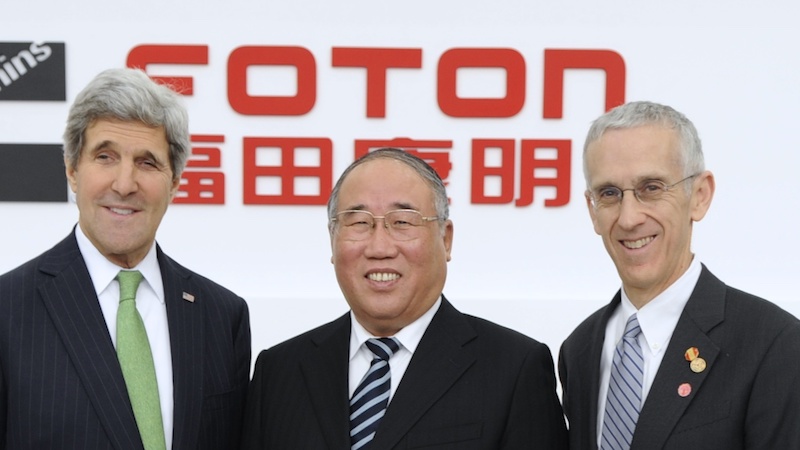 John Kerry in his former role as US secretary of state, with Chinese climate veteran Xie Zhenhua and then lead US climate negotiator Todd Stern (Pic: US State Department)

No matter how much US president Joe Biden wanted to prioritise tackling America’s many domestic problems, China was always going to require early attention. But he probably didn’t expect climate change to present the first test of the US-China relationship.

Climate change has been one of the most visible parts of Biden’s agenda from day one, with a blaze of announcements from rejoining the Paris Climate Agreement to cancelling permits for the Keystone XL pipeline.

US climate envoy John Kerry opened a new era of US-China climate diplomacy by saying climate collaboration was a “standalone issue” that would never be traded off against confronting China on its human rights record.

His remarks sparked an immediate, negative response from China’s foreign ministry. In a terse and surprisingly poetic statement, China said climate could not be isolated from other issues “unlike flowers that can bloom in a greenhouse despite winter chill”. Top diplomat Yang Jiechi warned the US not to interfere with the affairs in Hong Kong, Tibet and Xinjiang to avoid “damage to mutual trust and cooperation”.

The emerging diplomatic stand-off between the world’s two largest carbon polluters jeopardises attempts to deliver significant progress at the next UN climate summit in Glasgow, UK this November.

Treating climate change as a special case in global relations – similar to international health – would actually be a step backwards. Delivering the goals of the Paris Agreement requires a complete overhaul of the global energy and industrial systems in three decades, an unprecedented global economic transformation. Managing tensions between cooperation on stabilising the climate and competition over who benefits from the new clean economy is increasingly at the heart of geopolitics.

Over the next year, the US, China and the EU will all spend billions of post-Covid “green recovery” money on technologies such as electric vehicles and green hydrogen. This is bound to spark tensions over fair trade at the same time as the World Trade Organization is struggling to manage existing disputes. The EU and US are both discussing bringing in carbon border taxes; a policy Beijing has strongly opposed for decades. The EU will propose new rules on climate pollution from methane gas imports, pitting Russian and US suppliers against each other but needing Chinese cooperation to really shift global markets.

Beyond trade, the world needs China, the largest creditor to developing countries, to agree on restructuring and reducing Covid-19 debt. Stopping the international financing of new coal power stations, the bulk of which come from Xi Jinping’s flagship Belt and Road Initiative, is a critical benchmark of success for the Glasgow summit.

Climate cooperation that fails to tackle trade, innovation and financial issues will be ineffective at reducing global carbon emissions.

Kerry is also unlikely to win domestic support for selective technical cooperation in the service of climate goals, without addressing the wider tensions. There is a strong bipartisan consensus in the US Congress behind tough China policy. Any softening is likely to be seized upon by Republicans as a sign of weakness.

Biden in is not the only one with this problem. The EU has also hardened its overall approach to China relations, after years of frustrated attempts to crack open the Chinese market for European business and rising concern over Beijing’s treatment of religious minorities and pro-democracy movements. The European Commission named China as a source of online disinformation for the first time during the height of the coronavirus pandemic.

The first weeks of 2021 brought this dilemma into stark relief as the agreement in principle of the EU-China Investment Agreement raised criticisms from the European Parliament, which has yet to ratify the treaty, and from the incoming Biden team. Navigating climate engagement in this context has seen the EU opting to take a more assertive approach, making continued cooperation conditional on China showing progress on domestic climate pledges. Xi’s decision in September 2020 to commit China to achieving climate neutrality by 2060 was seen as a vindication of this tougher approach.

The reality of climate geopolitics is that it doesn’t fit easily into the binary foreign policy narratives of either cooperating with or isolating China. No effective climate policy can ignore the world’s largest polluter and producer of clean technology, but this doesn’t require concessions on trade or human rights. Xi is right in pointing out that “selective multilateralism” is not China’s option, and neither should it be America’s policy. Tackling climate change is in China’s own interest as it is becoming highly vulnerable to floods, drought and food insecurity.

The EU has already moved beyond a simple binary approach by defining China as simultaneously a partner, competitor and systemic rival. The challenge for Europe and Biden is navigating these different relationships while maintaining support of a public and political establishment that is increasingly distrustful of Beijing’s intentions.

This will be harder if there is no agreement across the Atlantic on how to navigate these competing forces. In his first major China foreign policy challenge, Biden should see that the road to Beijing goes through Brussels and Berlin.

Nick Mabey is the CEO of E3G