EU countries are seeking to align trade and foreign investment policies with the bloc’s climate goals, promoting a global phaseout of fossil fuels 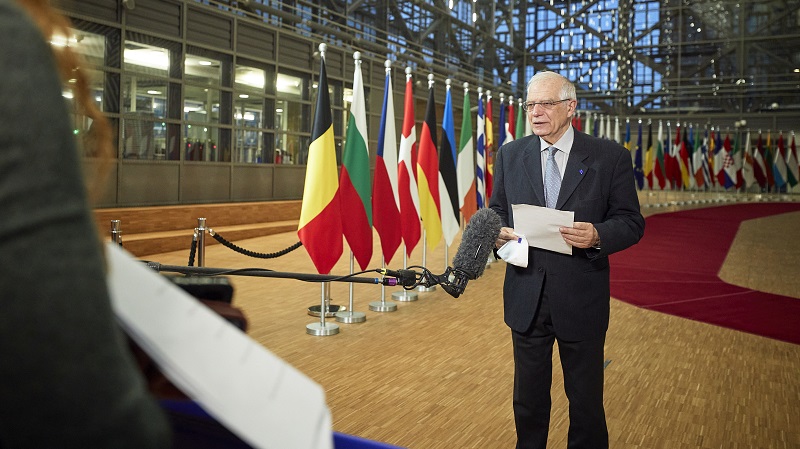 European Union foreign ministers will promote a global phase out of fossil fuels and reaffirm commitments to finance climate adaptation measures at a meeting on Monday.

“EU energy diplomacy will discourage all further investments into fossil fuel based energy infrastructure projects in third countries, unless they are fully consistent with an ambitious, clearly defined pathway towards climate neutrality,” according to draft conclusions from the meeting, seen by Euractiv.

Foreign ministers are expected to put green diplomacy at the top of their agenda, saying the EU “will seek to ensure undistorted trade and investment for EU businesses in third countries” as well as “a level playing field, and a fair access to resources and green technologies” in countries like China.

Moreover, all EU trade agreements, overseas aid and foreign investment strategies will from now on also need to be aligned with the bloc’s climate ambition.

“The EU will ensure that its trade policy and its trade agreements are consistent with its climate ambition,” the draft statement reads, acknowledging the European Commission’s efforts to “make the respect of the Paris Agreement an essential element for all future comprehensive trade agreements”.

The climate dimension of trade deals is a growing concern in Europe. An EU-Japan free trade agreement signed in 2018 was the first of its kind to carry a climate clause and a similar provision was added to an EU trade deal with Canada later that year.

Environmental clauses in trade deals have since gained further prominence in public debates. Last year, France threatened to veto a draft EU-Mercosur trade agreement if it doesn’t include commitments on deforestation.

But while Europe has started taking steps to reduce its emissions to net zero by 2050, this alone won’t be enough to stop global temperatures from rising 2C above pre-industrial levels, the draft statement says, calling for “urgent, collective and decisive global action”.

“It is an important step that foreign ministers confirmed their intention to build strong diplomatic alliances both with big emitters and climate vulnerable countries on climate mitigation and adaptation efforts,” said Wendel Trio, director at Climate Action Network Europe, an environmental pressure group.

Trio warned however that climate diplomacy will only be effective if the EU also works on phasing out fossil subsidies within its borders, including for gas, and increases financial support for poorer countries.

“Cooperation on phasing out fossil subsidies and international fossil finance, as well as supporting partners in the just and orderly transition away from fossil energy systems is a crucial first step,” said Pieter de Pous, from climate think tank E3G.

The energy sector is responsible for over two thirds of global greenhouse gas emissions, so the primary aim of Europe’s climate diplomacy should be to accelerate the global energy transition, promoting energy efficiency and the deployment of low-carbon technologies, the draft says.

Foreign policy will also need to be reconsidered to support a socially just economic and energy transition that promotes energy diversification.

To do this, EU foreign ministers will reaffirm the EU’s commitment “to further scale up the mobilisation of international climate finance” as part of a collective effort by industrialised nations to jointly mobilise $100 billion per year in support of climate action in developing countries.

This commitment, made under the UN climate process in 2009, has been put into question by a recent report that showed some countries exaggerated their investments into climate adaptation measures in developing countries.

France, for instance, was found to have overstated its adaptation finance by $104 million. Part of this was a declaration stating that $93 million went to climate adaptation in the Philippines when closer analysis showed only 5% was earmarked for adaptation.

The EU will also need to step up and work through European and international finance institutions, as well as the G7 and the G20, to make sure that fossil fuel finance does not keep undermining climate diplomacy, said CAN Europe.

On Monday, EU foreign ministers will review the whole range of diplomatic relations with third countries from an environmental perspective, including EU-Africa relations and EU-US relations under the new Biden administration.

While China is not directly mentioned, references to “level playing field, and a fair access to resources and green technologies” are all pointing in the direction of Beijing.

But it will be another Asian country, Japan, that will steal the spotlight at Monday’s meeting, with foreign minister Toshimitsu Motegi attending the gathering virtually, a first in EU-Japan relations.

Motegi was invited to explain Japan’s strategy for a “Free and Open Indo-Pacific” region, according to a brief statement posted on the website of the Japanese foreign ministry.

However, Europeans are likely to be interested in other subjects. While the Asian country has announced a goal to reduce emissions to net zero by 2050, its industry has become increasingly reliant on coal since the Fukushima nuclear incident in 2011. And under current plans, coal, oil and gas will still account for 56% of Japan’s energy use by 2030, critics say.

Moreover, Tokyo came under fire recently when evidence emerged that the country’s overseas lender had approved a loan to finance the construction of new coal plant in Vietnam.

Japan was also found to be the worst offender in exaggerating its climate adaptation spending.