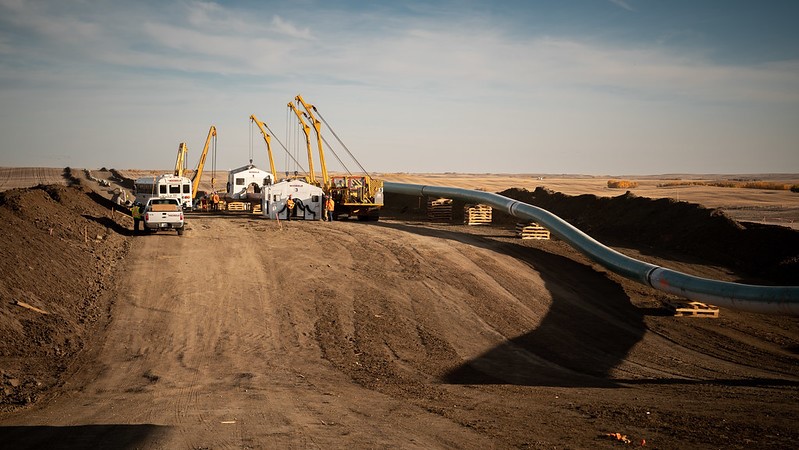 Construction of the Keystone XL pipeline near Oyen in Alberta, Canada. (Photo: Government of Alberta/Flickr)

Joe Biden’s plans to cancel the controversial Keystone XL pipeline expansion should be a “wake-up call” for the Canadian government to take the transition to a post-oil future seriously, say campaigners.

Transition documents obtained by Canadian broadcaster CTV News show US president-elect Biden could use an executive order to revoke the Keystone XL pipeline expansion permit as soon as Wednesday, when he is due to be inaugurated US president.

The move is part of a to-do list for Biden’s first day in office that includes re-joining the Paris Agreement and announcing the date for a US-hosted leaders’ climate summit.

The pipeline, which has been in development for more than a decade, aims to transport 830,000 barrels of oil per day from Alberta tar sands in Canada to refineries along the US’ Gulf Coast.

Faced with lawsuits and strong opposition from environmental groups, the project was rejected by the Obama-Biden administration in 2015 over “environmental concerns” – a decision reversed by Donald Trump in 2017.

The move would be a blow to Canadian prime minister Justin Trudeau who has unreservedly supported the pipeline expansion, describing it last month as “an integral part of Canada and America’s energy security”.

Trudeau, who was the first world leader to speak with Biden following his election win, said he discussed the issue during his phone call with the president-elect and would press the new US administration to continue with the project.

The Canadian leg of the pipeline has been under construction for months with nearly 200 kilometres of pipes installed, including across the US-Canada border. The construction of pump stations continues on the US side.

Dale Marshall, national climate programme manager at advocacy group Environmental Defence Canada, told Climate Home News Biden’s decision to end the Keystone XL expansion project was “a defeat for the oil and gas industry” but should not come as a surprise.

On the campaign trail, Biden pledged to “stop [the pipeline] for good”. “I’ve been against Keystone from the beginning,” he told CNBC in May, adding the project did not make economic or environmental sense.

“If this project dies, it does not get revived in any form,” Marshall said. “We should be reducing fossil fuel infrastructure, not adding to it, particularly not to ship some of the dirtiest fuel in the world. It is baffling that the Canadian government is still continuing to stick its neck out for the oil and gas industry that is clearly on its way out.”

The situation is “awkward” for Trudeau who has put his political capital behind building new pipelines, Marshall said. “Hopefully this is a wake-up call… to take the transition to a post-oil future seriously.”

Between 2005 and 2018, emissions from Canada’s oil and gas sector have increased, driven by growing production which offset emissions declines in other sectors, according to the latest government data.

Coupled with the slow implementation of climate policies, Canada’s support for the oil and gas industry has largely contributed to maintain its emissions at the same level since the beginning of the century. Much greater action is needed for the country to meet its emissions targets, according to Climate Action Tracker.

Recent projections from the country’s energy regulator found that the country did not need the additional capacity from the Keystone XL expansion and the Trans Mountain pipelines to export its oil. But the government has maintained its support for both projects.

“Canada’s blind spot is the oil and gas industry,” said Marshall. “Emissions have been stable for 15 years because the oil and gas continued to have projects green-lighted.”

“The US and Canada have a strong and unique economic relations. If your closest economic ally says it is time to go faster [on climate action], it is time to listen. This is an opportunity for Canada to send a message that it wants to stop the expansion of the fossil fuel industry in the country,” he said.

Perez said the move would hit at the heart of Canada’s energy policy, which continues to support its oil and gas industry.

Nearly two thirds of Canada’s exports are destined for the US. Canada’s oil trade with its neighbour was worth $75 billion and accounted for 94% of its oil exports in 2018, according to data from think tank Chatham House.

For Jason Kenney, Alberta’s premier, this is a key argument to allow Keystone XL expansion to go ahead.

In a statement, he said repealing the pipeline’s permit would “kill jobs on both sides of the border” and “weaken the critically important Canada-US relationship”.

In a defiant message, he called on Biden to “show respect for Canada as the United States’ most important trading partner and strategic ally by keeping that commitment to engage”.