The executive board is considering an extension of the Clean Development Mechanism beyond 2020, under industry pressure but with no political mandate 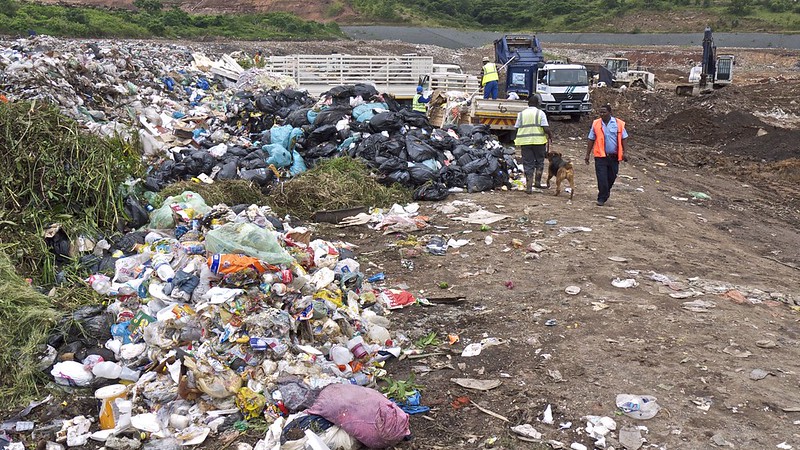 The Mariannhill landfill site in Durban, South Africa, which got funding to capture gas and burn it for electricity through the UN's Clean Development Mechanism. (Photo: BBC World Service/Flickr)

A handful of technocrats are considering an extension to a controversial UN-led carbon market, in a move experts warn would undermine the Paris Agreement.

The executive board of the Clean Development Mechanism (CDM) could decide by Monday, in a closed-door meeting, whether to keep the market alive beyond 31 December 2020, when its mandate runs out.

Established under the 1997 Kyoto Protocol, the CDM allowed rich countries to meet some of their climate obligations by funding carbon-cutting projects in the developing world. That protocol has been superseded by the Paris regime, which requires every country to contribute climate targets.

Industry is lobbying the CDM board to keep registering projects and issuing carbon credits until countries strike a deal on new carbon market rules. The earliest that can happen is November 2021, at Cop26 climate talks in Glasgow, UK.

But campaigners argue the board has no mandate to extend the market’s activities and risks prejudicing ongoing negotiations on the future of carbon trading.

The executive board “can’t simply proceed as if nothing has changed” when every country is now required to curb emissions, Kelley Kizzier, associate vice president for international climate at the Environmental Defense Fund (EDF), told Climate Home News in an email. “That’s just not right.”

If the CDM were to continue operating after 2020 without a political decision to do so, “we not only sacrifice leverage to improve upon the CDM, we lose a key incentive for agreement on [carbon markets],” she said.

Climate negotiators failed to resolve a deadlock on international carbon trading rules at the last UN climate summit in Madrid, Spain, in December 2019. That created uncertainty over whether the CDM could still be used by countries to meet their goals under the Paris deal.

The postponement of Cop26 because of the coronavirus pandemic deepened the uncertainty, creating a two year gap before the next chance to thrash out an agreement.

At Cop26, talks will resume on establishing new rules for a global carbon market, known as Article 6 of the Paris Agreement. Negotiators could decide to give the CDM a new mandate under this new carbon trading system, but the issue is highly contentious.

Countries like Brazil and India want to continue trading credits from projects registered with the Kyoto regime in the new global carbon market. That faces opposition from Europe and climate-vulnerable countries, who warn it risks flooding the market with low-value credits and undermining the Paris goals.

The CDM has been mired in allegations of human rights abuses and corruption, and EU-commissioned research has shown that a majority of its projects are unlikely to drive emissions cuts.

Gilles Dufrasne, policy officer at NGO Carbon Market Watch, said should the CDM continue to register projects and issue credits beyond 2020, there would be little incentive for the CDM’s backers to compromise on new carbon market rules.

“This would undermine the ongoing market negotiations under the Paris Agreement because this status quo fits the needs of some countries, which will have no interest to come back to the negotiation table,” he told CHN.

“What we need is a transparent re-assessment of all projects to decide which ones can or cannot continue to issue credits after 2020, not a closed-door deal by experts which do not represent the views of countries.”

Without political guidance, the CDM executive board – a technical body which oversees the market  – is negotiating the issue in sessions closed to observers and the media.

At the only open session of the meeting last week, board members aired disagreement over the extent of their powers. They act in an individual capacity and do not represent their governments.

Lambert Schneider, a German carbon market expert at the Öko-Institut, warned that issuing carbon credits after 2020 “is not within the authority of the CDM executive board”. To do so would breach previous decisions by countries under the UN climate convention, he said, while threatening to “prejudice” a Cop decision.

Kamal Djemouai, of Algeria, said the work of the CDM should continue unchanged until countries agreed on new carbon market rules. “It’s not up to the CDM board to decide whether or not to stop anything”.

The International Emissions Trading Association (Ieta), an industry body whose members include oil majors such as BP, Shell and Total, urged the board “to do everything in its power and mandate to ensure the smooth operation of the CDM” while waiting for a political decision from countries.

A number of large companies are relying on CDM credits and other offsets to meet their carbon-cutting pledges.

Stefano de Clara, Ieta’s international policy director, said the uncertainty over the future of the CDM was “already starting to erode business confidence in the CDM and emissions reduction mechanisms operated under [UN Climate Change]”.

The suspension of carbon trading activities would limit the flow of private capital into carbon-cutting projects and could result in emissions rising, de Clara argued.

“In light of the coronavirus pandemic, we believe that the continuation of the CDM will be a responsible interpretation of the intention of parties” to avoid disorder in the markets, he said.

Dufrasne, of Carbon Market Watch, disagreed the future of the CDM would have an impact on emissions reductions. “Those projects which truly rely on carbon credits to survive can register under other standards and continue to sell their credits to private companies,” he said.

In a letter to the board, Marc Sadler, of the climate funds management unit at the World Bank, said the trust had “operated under the assumption” that the CDM would continue to function until a new global carbon market is operationalised.

“Otherwise the consequences for our CDM project portfolio would be severe,” he wrote, with the bank expecting more than a million credits to be issued from emissions cuts that occurred before 2021.

Decisions of the CDM’s executive board can be blocked if opposed by at least three board members. If agreement is not reached at this session, the issue will be pushed to a meeting 1-14 December.