Project developers in poor countries are struggling to attract finance, as deadlock on international carbon trading rules cannot be resolved before November 2021 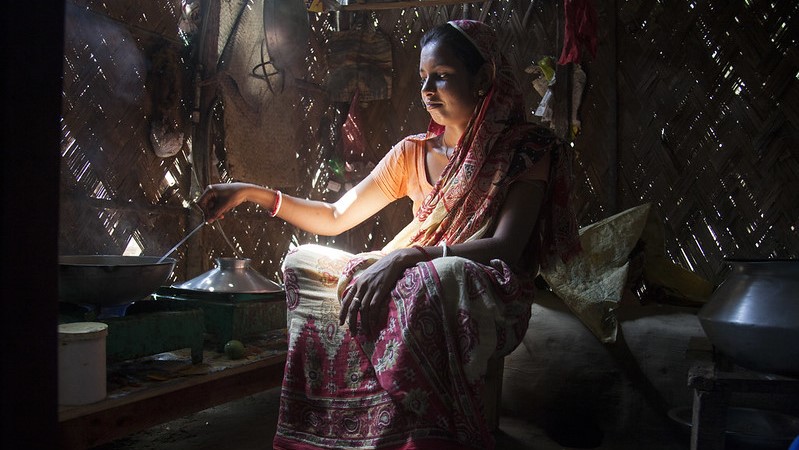 A woman in Bangladesh using bio gas for cooking. Projects developed through carbon markets include rolling out efficient coockstoves to reduce the use of biomass which generates smoke and greenhouse gas emissions. (Photo: Vidura Jang Bahadur/UN Women Asia and the Pacific/Flickr)

Projects to curb greenhouse emissions in developing countries are in limbo amid another delay for nations to design a new global carbon market.

Carbon markets allow countries and companies to buy credits to meet their climate goals by investing in carbon-cutting projects elsewhere.

But in recent years, countries have been unable to agree the rules for new international carbon trading system under the Paris Agreement. The postponement of the next UN climate summit, Cop26, to November 2021 because of coronavirus is dragging out the uncertainty for investors and project managers about the future of carbon credits.

“It’s a burning issue for us,” said Sandeep Roy Choudhury, the co-founder and director of VNV Advisory, an Indian social enterprise which develops climate-related projects in South and South-East Asian communities, supporting the work of more than 50 NGOs in the region.

But the lack of clarity on the new rules has made investors increasingly reluctant to back projects, which often have a lifespan of five to 10 years, he told Climate Home News. As a result, his company has put developing new projects on hold for the time being.

While VNV Advisory has so far been able to support its established projects, “smaller project developers don’t stand a chance,” Choudhury said.

If applied with robust rules, advocates say carbon markets are a cost-effective way to achieve emissions reductions and could help countries meet their climate goals under the Paris deal.

Critics warn that carbon offsetting takes the pressure off big polluters to tackle their own emissions, while channeling money into projects of questionable value.

The issue has become one of the most contentious in the climate talks. Negotiators failed to reach a consensus on the new market rules both at climate talks in Katowice, Poland, in 2018 and again in Madrid, Spain, last December. The earliest it could now be agreed is November 2021, at Cop26 in Glasgow, UK.

The Clean Development Mechanism (CDM), a carbon market established in 1997 under the Kyoto Protocol, has been mired in allegations of human rights abuses and corruption, with a majority of projects found unlikely to drive emissions cuts.

“At present, and in this post-2020 era of climate action, you cannot operate with all these flaws when there is an increasing sense of monitoring, reporting and transparency,” Lahiri said.

The postponement of Cop26 bears some legal implications for the CDM. The mandate for developed countries to use CDM credits to achieve their climate goals runs out at the end of 2020.  Extending the CDM’s mandate would need to be agreed by parties to the Kyoto Protocol.

The CDM could also be given a new mandate under the Paris Agreement. Countries like Brazil and India want to continue trading their surplus credits from the previous regime. That faces opposition from Europe and climate-vulnerable countries, on the basis it risks flooding the market with low-value credits and undermining the Paris goals.

Under the San Jose principles, an alliance of progressive countries said pre-2020 credits had no place in Paris-era carbon accounting.

Countries don’t have to wait for the deadlock to be resolved to start using carbon trading, said Alex Hanafi, lead counsel at  the Environmental Defense Fund’s Global Climate Programme.

Under Article 6.2 of the Paris Agreement, countries are allowed to strike bilateral and voluntary agreements to trade carbon units.

Even without an agreement on rules to operate a centralised carbon market, “countries can move forward and set the bar for what implementation looks like by applying a robust set of rules,” Hanafi told CHN.

Switzerland, for example, has already indicated plans to use bilateral trading to achieve their emissions reductions.

“This is all about ambition,” Hanafi said. “If we keep waiting for something to happen [in the negotiations] we are losing precious time”. Voluntary cooperation between countries could boost confidence among investors, he added.

However, this may not be an option for many poor countries, which don’t have the capacity to negotiate multiple markets and are relying on a centralised system.

Negotiators should use the additional time “to get the rules right,” Lennon said. That meant safeguarding human rights and the rights of indigenous peoples and closing loopholes that would allow for more, not less, CO2 to be emitted.

“There is a risk emissions reductions claimed today by a company will also be claimed by a country in a few years when that country reports on its climate plan,” he told CHN.

Some observers doubt an agreement will ever be reached.

“There is a bit of resignation setting in,” said Derik Broekhoff, senior scientist at the Stockholm Environment Institute, who described the situation as “clear as mud”. “Will we ever get an agreement an carbon markets?”

Broekhoff said the one-year delay for agreeing the rules would have limited practical impacts, with many countries still assessing how to use carbon markets to achieve their climate plans. But it extends uncertainty at a time the response to coronavirus is reshaping the economic landscape.

For Broekhoff, the post-pandemic recovery could open space for an agreement to be reached in Glasgow in November 2021. Dufrasne, of Carbon Market Watch, worries the issue will be given less attention as governments focus on rebooting their economies.

Either way, the thorny negotiations will become “much harder” as governments embark on different recovery pathways, said Marcelo Rocha, a Brazil-based consultant with expertise on carbon markets who advises governments in Latin America.

This technical issue of agreeing rules for carbon markets will now have to considered in tandem with countries’ climate plans and recovery packages, he said.

“My hope is that we use this opportunity to use carbon markets as an instrument to make a sustainable recovery happen in a more cost-effective manner.”