If Joe Biden is serious about tackling climate change, he should adopt his running mate’s plan to negotiate an international deal to leave oil in the ground 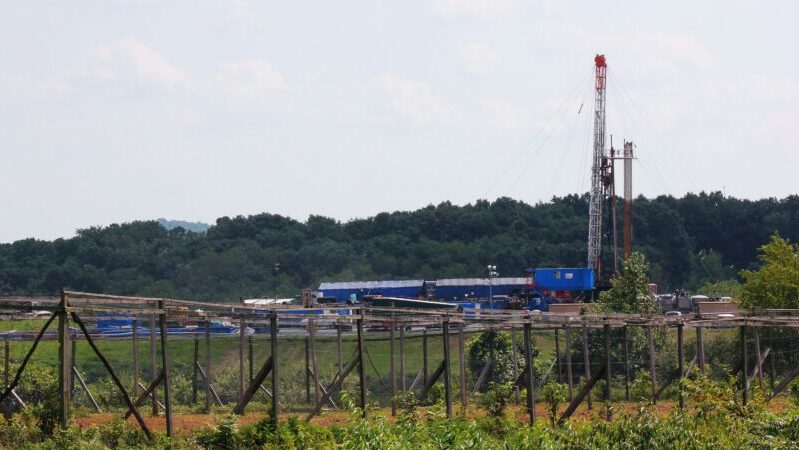 A fracking rig in Pennsylvania: the US is the biggest oil and gas producer in the world (Pic: WCN 24/7/Flickr)

What might a Kamala Harris vice-presidency in the US mean for international climate diplomacy?

Previous holders of the office have made significant contributions: Al Gore in negotiating the Kyoto Protocol and Joe Biden in diplomacy with China ahead of the 2015 Paris climate summit.

One intriguing possibility is contained in Harris’ “Climate Plan for the People,” released last September when she was a contender for the top job: to “convene a meeting of major emitters in early 2021” that would include “the first-ever global negotiation of the cooperative managed decline of fossil fuel production”.

Now Harris has been appointed running mate in Biden’s bid for the presidency, it looks likely the Democrats will hold a climate summit if elected. Their joint platform states only that it would be for the purpose of encouraging major emitters to “join the United States in making more ambitious national pledges”.

Expanding that brief to include a discussion of managed decline would signal the next Democratic administration is serious about achieving the goals of the Paris Agreement.

Energy expert Aimee Barnes, the brains behind the Harris plan, outlined the case for it in Columbia University’s State of the Planet blog. Fundamentally: there is far more carbon in the Earth’s crust than we can safely burn.

Because oil, gas and coal compete economically with clean energy, the most important consequence of this overabundance is that reducing demand alone is insufficient: without corresponding reductions in supply, fossil fuel prices will fall, increasing their competitiveness with clean energy and delaying the clean energy transition. This is particularly true, and particularly challenging, in respect of the oil industry, a highly liquid global market that is an order of magnitude more lucrative than the coal industry.

While removing fossil fuel subsidies and increasing carbon taxes can help green the playing field, there will ultimately be no avoiding the difficult question of whose oil, gas and coal must be left underground, and thus whose fossil fuel production infrastructure must be dismantled first.

Supply control treaties have worked in the past. In 1907, British India agreed to reduce opium exports to China at 10% a year if China reduced domestic cultivation by the same amount. This treaty successfully ended the legal trade by 1913, and supply control has remained a central tenet of multilateral drug policy ever since.

A theoretical framework for managed decline of fossil fuels is developed in this recent piece by Muttitt and Kartha in the journal Climate Policy. The authors propose five guiding principles, including reducing extraction in line with a 1.5C temperature limit, reducing fossil fuel extraction fastest where the social costs of doing so are lowest, and sharing transition costs fairly, “according to ability to bear those costs”.

In practice, these principles place the burden of most rapid transition squarely on the shoulders of wealthy states with already-diversified economies: Canada, Germany, Norway, the UK, and the US. There is certainly a strong ethical case for developed country leadership, not to mention robust international legal support for it dating back to the 1992 Framework Convention.

As others have pointed out, a potential corollary of rapid managed decline in developed countries is an increase in the revenue of petrostates like Russia and Saudi Arabia. Considering those countries have tended to direct such revenue towards military aggression, in Ukraine and Yemen respectively, rather than the clean energy transition, it is valid to question whether this is wise.

Neither Barnes nor Muttitt and Kartha grapple directly with this point. Barnes suggests that a coalition for managed decline could operate as an “inverse Opec”, referring to the organisation of oil exporting countries that coordinate production. In one sense there would be little “inverse” about it. On the contrary: achieving the 1.5C temperature goal would require a more aggressive posture than Opec currently pursues, tempered as it is by a desire to maintain oil’s competitiveness for as long as possible.

Reducing supply in line with climate imperatives could thus have significant financial consequences: if it increased the price of oil from $40 to $50 per barrel, for example, that would generate an additional $90 million a day of revenue at current consumption levels. That would be enough to fund the UN Climate Change target of $100 billion per year for climate action in developing countries in less than two weeks – if it were used for that. If it sought such an outcome, an alliance for managed decline would, in that respect, be very much strategically “inverse” from Opec’s current leadership.

Ultimately, Barnes and Harris are right: the next Democratic administration should take on the challenge of managed decline. Even as the survival of democracy in the United States comes under question, it is clear that supply control is too important to be left in the hands of the world’s authoritarians.