Renewable energy sources are proving resilient in the Covid-19 crisis, while analysts say coal power capacity could peak this decade 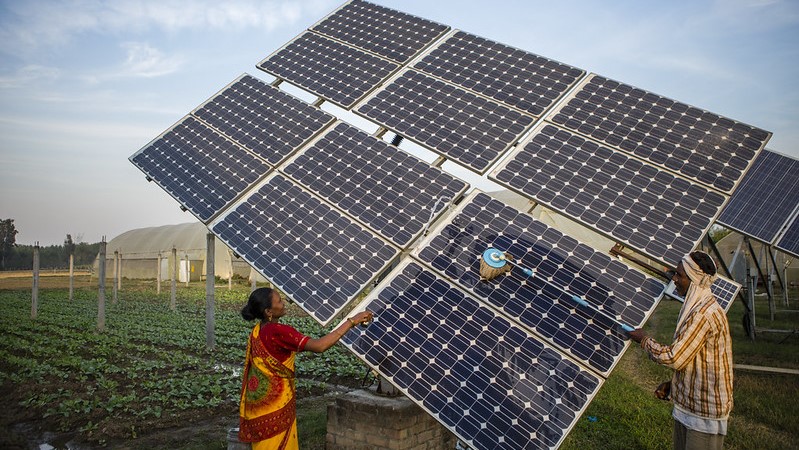 Farm workers clean solar panels at a farm in Jagadhri, in the Indian state of Haryana (Photo: Prashanth Vishwanathan/IWMI/Flickr)

Travel restrictions to halt the spread of coronavirus are speeding the switch from coal to renewable energy in India.

The world’s second largest coal consumer has seen its energy demand collapse by nearly 30% during the lockdown which started on 25 March, with coal generators bearing the brunt.

In 2018, the International Energy Agency forecast Indian coal demand would more than double by 2040 – a major challenge to international efforts to prevent climate breakdown.

With the right policy framework in place, coal generation in India could peak much sooner, analysts have told Climate Home News.

“I think we will see the peak in coal use for power generation this decade,” said Tim Buckley, director of energy finance studies for the Australia and South Asia region at the Institute for Energy Economics and Financial Analysis (Ieefa).

“There is potential for India to really surprise the global community and contribute to the decarbonisation story while doing it in a very cost-effective way.”

There was political backing for renewable energy prior to the Covid-19 crisis, emboldened by rapidly falling costs.

At the UN Climate Action Summit in New York last year, Prime Minister Narendra Modi promised to double India’s renewable target to 450GW by 2030, up from around 87GW installed capacity today. The bulk will come from solar panels.

The cost of adding solar electricity stands at about 2.5 rupees per unit generated, compared with around 4.5 rupees for new coal capacity, according to analysts. Even coupled with more expensive batteries to store electricity for after dark, solar energy was auctioned at a cheaper price than new coal earlier this year.

Meanwhile, the coal sector has been faced with cash flow issues over the past few years, with most plants running well under capacity.

An analysis by Ieefa found that renewables delivered more than two-thirds of India’s new generating capacity additions in the 2019-20 fiscal year.

Before the outbreak, Sunil Dahiya, analyst at the Centre for Research on Energy and Clean Air, said there was “a clear signal that coal will not fuel future electricity growth,” which will mostly be provided by renewables.

“Now the pandemic makes that trend much clearer,” Dahiya said. “Coal capacity could peak before 2025,” he said, noting a peak in coal generation will take longer.

The competitive cost of renewable energy is not the only reason for the sector’s resilience in a period of low demand.

In India, the sector benefits from a “must-run” status compelling power distribution companies to use solar or wind energy whenever it is generated.

Powered by sun and wind, renewable generators are not exposed to the same supply chain disruptions as fossil fueled plants.

“The resilience of the renewable model was established during the lockdown,” Abhishek Dangra, senior director at S&P Global Ratings, told Climate Home News.

“The pandemic tipped the scale in favour of renewables for cleaner and cheaper power,” he said, adding that coal’s share in power generation will continue to decline in the medium to long term.

For Dangra, 2027 could mark the peak in capacity when India “will likely not need any new coal plants”.

In recent years, private investors have also been increasingly reluctant to invest in Indian coal infrastructure with much new finance coming from state-backed banks and companies. On the contrary, global investors are ready to invest “aggressively” in new renewable infrastructure, Buckley said.

“You can’t build a power plant if it’s not funded and if it’s not going to provide a return. And from a financial perspective, you can’t justify a new coal-fired power plant,” he added.

“The pandemic has accelerated the debate about what choices India will have to make” for its energy sector, Swati Dsouza, a New Delhi-based consultant at the Brookings Institute told CHN.

Despite the favourable conditions for boosting renewables, Dsouza did not rule out an uptick in coal generation and new capacity once the lockdown lifts, saying coal will continue to meet baseload demand. “Renewables have not been a substitute for coal,” she said. None of the new coal plants in the pipeline for construction have so far been cancelled.

Buckley said he was confident the Indian government could deliver on its target of 450GW of renewable energy by the end of the decade despite the huge effort needed to scale up the sector.

The pace of renewable deployment and the growth of the Indian economy will remain key factors in determining the shape of the transition. It will also depend on the grid being ready to match variable solar and wind generation with consumer demand.

As Prime Minister Modi called on the nation to turn off their lights for nine minutes at 9pm on 5 April in a call for solidarity against coronavirus, there were concerns the grid might collapse.

“This was a huge test of resilience for the grid,” Buckley told CHN. “But it passed with flying colours.”

With a looming global recession and an Indian government strapped for cash while fighting the pandemic, there can be no trillion-recovery package expected to accelerate India’s clean energy transition.

For Buckley, that will require Modi to think “laterally” about ways to boost renewable deployment “and marshal all the private capital on it”.