After the oil crash, we need a managed wind-down of fossil fuel production

Comment: To meet climate goals and avoid further market chaos, governments need to plan the decline of coal, oil and gas production, with support for workers 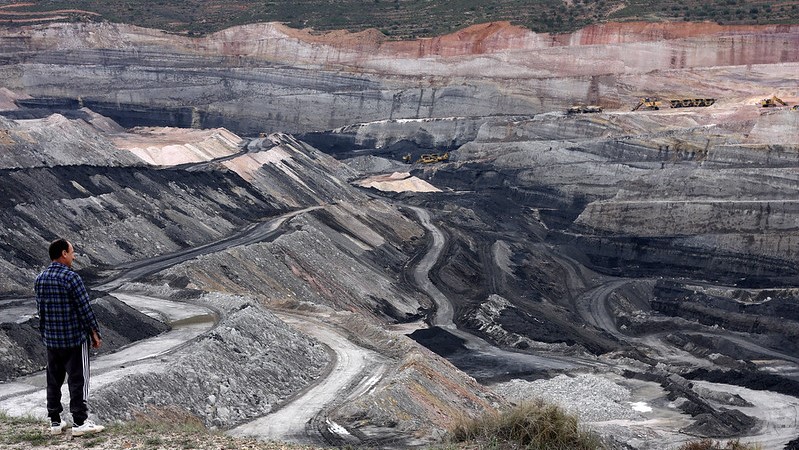 A coal mine in Estercuel, Spain (Pic: Jennifer Woodard Maderazo/Flickr)

Last year, we joined dozens of researchers to release a report that found countries around the world are planning to produce far more oil, gas, and coal than compatible with climate goals.

Little did we or anyone else expect that, just four months after that first Production Gap Report, major oil-producing regions would be reeling from the consequences of over-investment in and over-dependence on fossil fuels, exposed by a virus that has wreaked havoc across sectors and livelihoods.

Of course, our report did not predict a pandemic.

The risks we examined were of a different, more predictable, and less immediate nature. We looked ahead to 2030 and found that governments’ zeal to extract every possible drop of oil, lump of coal, and cubic meter of gas could lead to twice the levels of fossil fuels than would be consistent with the Paris Agreement’s 1.5°C limit on warming.

Now, the tide has turned. Calls to “keep oil in the ground” are typically a mainstay of environment and human rights activists. Now this message has seeped into some of the world’s most conservative institutions, even if for different reasons, amounts, and timescales.

In an effort to stabilise the market, members of Organisation of the Petroleum Exporting Countries (Opec) and their allies agreed to unprecedented production cuts last month. Even this could not prevent the price of oil dropping, a few days later, to below zero dollars for the first time ever.

This historic moment is largely the consequence of the drop in oil demand due to Covid-19-related lockdowns. But it certainly didn’t help that up until recently, many fossil fuel producing countries were angling to boost output and increase market shares.

Our research put specific numbers on the scale of the problem, finding that by 2030, governments are planning to extract 60% more oil, 70% more gas, and 280% more coal than would be consistent with a 1.5°C pathway.

This is not a trajectory we can go back to.

If the world is to recover better from the pandemic, we must avoid a scenario where efforts to overcome one crisis lock us into another. That is why this year’s Production Gap Report will examine how government bailouts, stimulus measures and strategies are delaying – or accelerating – the transition away from dependence on fossil fuel production.

In the immediate future, the key priority is to support vulnerable groups around the world, including fossil fuel workers, who face significant hardships as the economy suffers and jobs are lost. Even at this stage, it’s possible to support both fossil fuel workers and the environment, as Canada’s recently announced programme to clean up orphaned and abandoned oil and gas wells demonstrates.

But we can’t stop there. We also need to address our longer-term future. Unabated extraction is incompatible with a safe climate – as is government support that props up an industry that needs to be winding down.

As governments marshal stimulus funds, bail out industries and nationalise stranded assets, they should make their support to industry conditional on diversification beyond fossil fuels. Now is also the time to invest in green industry and clean energy, to ensure the long-term viability of communities that currently rely on fossil fuels.

Reforms to subsidies for coal, oil, and gas consumption – which amounted to at least $400 billion in 2018 – are also overdue. The present moment represents an opportunity to drop subsidies for consumers in particular, with oil and gas prices at record lows.

Moreover, there is an opening for countries to increase taxes on oil and gas consumption to mobilise funds for the Covid-19 crisis response, as India and Costa Rica have already done.

As they emerge from the Covid-19 crisis, countries need to pursue equitable transitions away from fossil fuels – ones that do not echo the chaos and volatility of recent energy market behaviour.

This means social dialogue and inclusive just transition planning processes that ensure the needs of workers and communities are met, that alternative livelihoods are made available, and that those affected by change are not left behind.

Multilateral and bilateral cooperation is also of paramount importance, including support for countries with fewer resources to achieve a just transition.

At this crucial time in history, the world finds itself at crossroads. The path towards a safer, greener and more resilient future involves a just and planned wind-down of fossil fuels.

Cleo Verkuijl is a research fellow at the Stockholm Environment Institute, Ivetta Gerasimchuk is the lead for sustainable energy supplies at the International Institute for Sustainable Development and Niklas Hagelberg is the coordinator of the UN Environment Programme’s subprogramme on climate change.