From counting penguins to mapping solar panels, people staying at home during the pandemic can contribute to climate change research 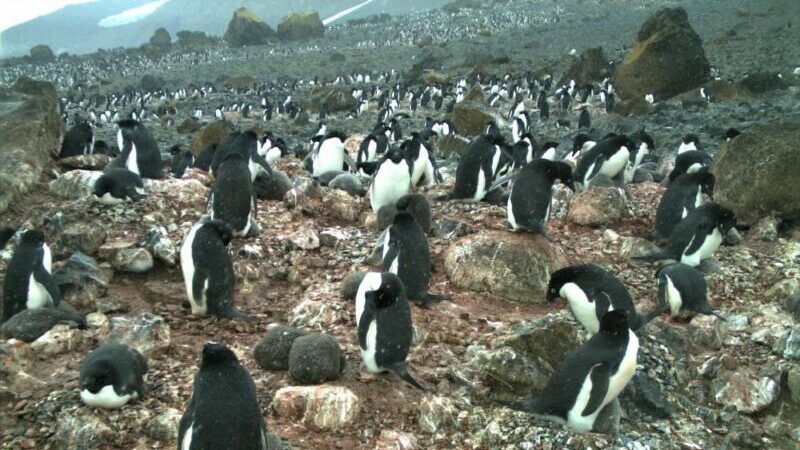 Participation in citizen science projects has surged in recent weeks as people stay at home to slow the spread of coronavirus.

Parents struggling to educate their children, furloughed workers and vulnerable people are contributing to climate change research in unprecedented numbers.

“There is this sense of wanting to do a little thing that contributes to a bigger effort, that is going down well with people,” Chris Lintott, astronomer at Oxford University and co-founder of Zooniverse, told Climate Home News.

Penguin Watch, Floating Forests and Rainfall Rescue are among the site’s most popular climate change projects.

The common approach is to take a massive set of images and ask sharp-eyed volunteers to extract useful information from them. While this kind of work can be done by machine learning, the computers need large “training sets” of human-verified data to get started.

The results from combining machine learning and human interpretation are better than you could get with either method alone, Lintott said. “Machine learning can do quite a good job but it gets confused by clouds and so on.”

In Penguin Watch, children as young as five can help track penguin breeding patterns. Volunteers count the adult penguins, chicks and eggs visible in photos captured by 100 cameras around the Southern Ocean and Antarctic Peninsula.

I’m still working, otherwise I’d be back on @the_zooniverse (it’s been too long). I am trying to nudge folk with kids towards @penguin_watch (this is also a great de-stressing mindfulness exercise😊)

Floating Forests takes a similar tack with underwater kelp forests, an ecosystem sensitive to changes in water temperature and quality.

But the biggest climate hit on the site is Rainfall Rescue, which involves digitising historical British weather records. With better data on rainfall variation over time, the idea is planners can make better decisions on the design of drainage systems and flood defences.

Ed Hawkins, the meteorology professor behind the initiative, told CHN his team had accelerated the project launch to take advantage of pandemic-enforced idleness. It paid off.

The Met Office had scanned 65,000 documents containing an estimated 4-5 million rainfall measurements from 1820 to 1960. In just 12 days, volunteers processed around three quarters of the data.

It is an “amazing” response, said Hawkins. The professional scientists produce graphics from the newly digitised data as quickly as possible, to show volunteers the value of their work. “Keeping up has been a challenge.”

So, how are the 14,882 volunteers at #RainfallRescue getting on?

They’ve now rescued 4 MILLION monthly rainfall amounts measured across the UK between 1900 and 1960.

Can you help them finish the job of getting back to the 1820s by the end of the week? https://t.co/RYOh6z4Oqw pic.twitter.com/vQEzofOo5L

One volunteer, signing off as Giosellina, emailed from Australia to explain her fascination with the project. “I am of an age that remembers pen and inkwells,” she wrote, adding that she loved patterns and UK place names.

“I live in a drought-ridden edge-of-desert area in Australia and to read that somewhere in Wales had 9 feet of rain one year beggars belief.”

Contributors also find nuggets of historical interest in the documents.

Alister Harman, an environmental studies graduate who has been spending 2-3 hours a day on the project, spotted a note explaining a gap in the records from a mental hospital. “Inmates” – or patients, as we would call them now – had hidden the rain gauge and it wasn’t found until six years later.

Harman came to the Rainfall Rescue project after reading a BBC article. His work placement in conservation was on hold and he was looking for other ways to satisfy his interests.

“I started banging numbers into boxes and translating people’s bad handwriting… and actually found I was really enjoying it,” he said. “The community on [the] Rainfall [Rescue project] is really good.”

He has also been using expertise from his degree to identify mammals from camera trap images.

Comment: One million solar panels! If only we knew where they were…

Much citizen science can be done from a phone or computer indoors. Where coronavirus regulations permit a daily walk, citizens can also help with mapping the natural and constructed world.

In February, Dan Stowell and Jack Kelly wrote for Climate Home News about the challenge of forecasting solar power output when the location of many panels is unknown.

They are crowdsourcing data on the whereabouts of small-scale solar installations through OpenStreetMap. That can be used to train computers to identify other panels from satellite images.

Stowell, a lecturer at Queen Mary, University of London, told CHN the number of panels mapped was continuing to climb and they are planning to work with a climate charity to drive more participation.

On the flipside, one of their most dedicated contributors had a health condition and at-risk family members, so had less time for the project as hygiene took priority.

Another project Stowell is involved with, Missing Maps, has taken its monthly mapathons online so people can continue to join in from home. It aims to improve mapping of vulnerable parts of the world to improve the humanitarian response to disasters, including extreme weather events.

Justin Schell of the University of Michigan, a proponent of community science and co-host of the Citizen Science podcast, told CHN citizen scientists can do work on a scale that would be impossible for lone scientists to accomplish.

It works best when volunteers are engaged throughout the process and not just expected to complete work scientists set for them, he argued by email.

“Zooniverse is really good at making sure that project leads prioritise engagement and sharing with volunteers (such as through the Talk board), but that isn’t true across the field,” he wrote.

Schell is also involved with initiatives motivated by environmental justice, for example to help communities air quality. “These kinds of projects also more explicitly engage with questions of power and inequality, which is something that I’d say conventional citizen science doesn’t address as explicitly as they could (or should).”