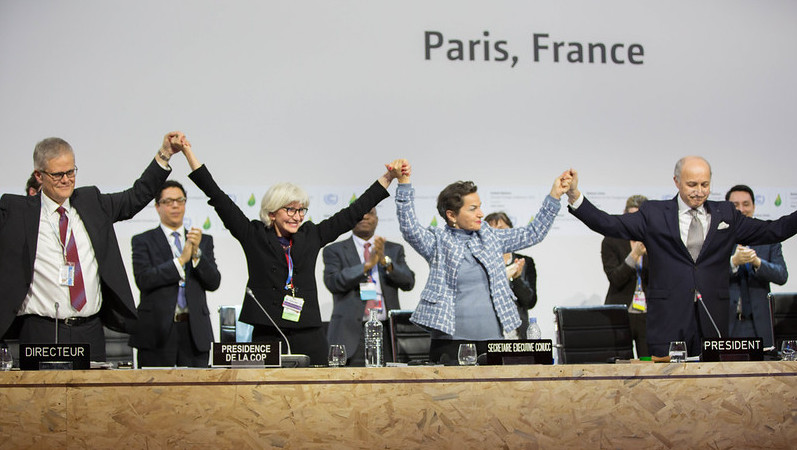 The 2020s are the decisive decade for the world to avert the worst impacts of climate change in a peaceful revolution that rejects the type of “short-sighted” pro-coal policies embraced by US President Donald Trump, a key architect of the Paris climate Agreement has said.

Christiana Figueres, who headed the UN Climate Change secretariat from 2010 to 2016, urged governments, cities and citizens to halve world greenhouse gas emissions by 2030 and cut emissions to net zero by 2050 to tackle what she called a “dire emergency”.

“This decade is the critical, decisive decade for the future of humanity and the planet,” she told Climate Home News of her book, “The Future we Choose”, which will go on sale on Tuesday.

It is co-written with Tom Rivett-Carnac, who also helped build the 2015 Paris climate pact.

Figueres, a former Costa Rican diplomat, said the UN summit in Glasgow, Scotland, in December will be a vital moment to chart the course towards a cleaner future away from fossil fuels.

UN Environment says that a goal of almost halving greenhouse gas emissions in the next decade works out at annual emissions cuts of 7.6% per year worldwide in the 2020s – rates previously associated with wars, recessions or slumps such as the 1991 collapse of the Soviet Union. Emissions have risen in most recent years.

In a phone interview from Costa Rica, Figueres, 63, said it was not wide-eyed naivety to reckon such unprecedented cuts were possible and advocated an attitude of “stubborn optimism” for the 2020s to achieve a goal of limiting warming to 1.5C above pre-industrial times.

“We know there are going to be many stumbling blocks along the way. This is difficult. We cannot delude ourselves,” she said. “There is no guarantee of success but not trying is a guarantee of failure.”

Among hurdles to action are the United States, where Trump doubts climate change is a major problem and is seeking to bolster jobs in the fossil fuel industry.

Figueres said the US risked losing out to China and other nations which were investing heavily in renewable energies such as solar and wind.

“That is so short-sighted on the side of the federal government, to keep its [fossil fuel] industry in the 20th century,” she said. “It is similar to giving signals to the US communications industry to say ‘you know what, we don’t think cellphones are really the thing. Let’s go back to landlines’.”

In the book, she also criticises those who doubt mainstream scientific findings that climate change is primarily caused by human activities.

“President Donald Trump is the most prominent example,” the book says, adding: “Denying climate change is tantamount to saying you don’t believe in gravity.”

Trump is pulling the US out of the Paris Agreement in a withdrawal that will formally take effect on 4 November – five days before the start of the climate talks in Glasgow. The White House did not immediately respond to a request for comment on Figueres’ remarks.

Figueres said she was encouraged that all the current Democratic candidates to take on Trump promised to rejoin the Paris Agreement if elected.

Her book portrays an imaginary 2050 scenario when the world suffers the impacts of inaction – people wear masks against pollution, crops are grown under cover to ensure stable conditions. Most coral reefs are dead, rising seas are forcing evacuations inland, and the European Union has disbanded under political strain.

An alternative imagines what could happen if governments act – the air is clean, trees have been planted almost everywhere. High speed electric rail networks in the US have replaced most domestic flights, fossil fuels are a thing of the past.

She said she took heart from a flattening of global carbon dioxide emissions in 2019, according to the International Energy Agency, that might be a hint that a peak in emissions was close after decades of steady growth.

Her book also points to breakthroughs long thought impossible – the US moon landing in 1969, the collapse of the Soviet Union, Nelson Mandela’s release from prison in 1990 and the end of apartheid in South Africa.

“This is a revolution for the high road … at a global level,” she said, also noting that her father, late Costa Rican president José Figueres Ferrer, decided to abolish the national army in 1948, the only nation to have done so.

And technology is helping – prices of solar panels have fallen 90% in the past decade. Pressure for action is also growing, for instance by Swedish teenage activist Greta Thunberg, as well as green commitments by more and more companies, investors and cities.

Figueres said individuals can play their part by making climate change a top priority in voting and changing their lifestyles. She said she had cut her own carbon footprint by dropping red meat from her diet and travelling by public transport when possible.

But she still has high emissions from travel – Figueres and Rivett-Carnac will unveil the book in New York on Tuesday, then go on a tour in places including Washington, Australia and Paris.

At a news conference in Bonn when she was appointed to the UN job in 2010, she was asked when she reckoned climate change would be solved.

‘Not in my lifetime,” she said, something she writes in the book was an error. Now, she said an emphatic “yes” to the same question. Barring accidents and illness, she will be 73 in 2030 and 93 in 2050. She hopes her genes favour longevity – and one of her grandfathers lived to 105.