Smallholder farmers grow 90% of Nigeria’s food but their crops are vulnerable to ever more extreme weather linked to climate change. New technologies can help 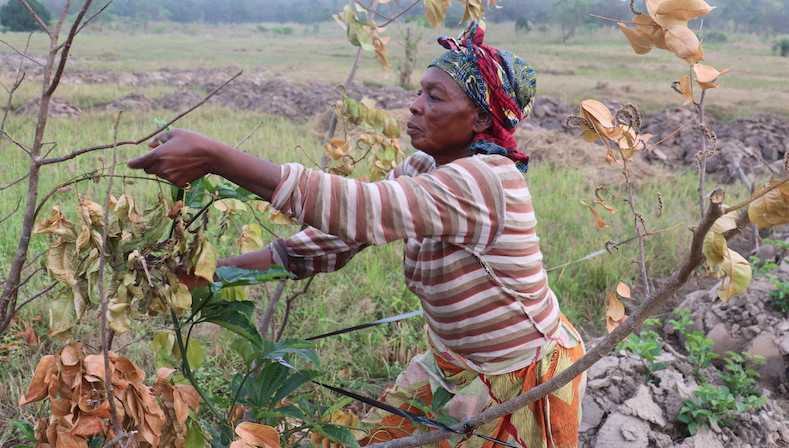 Elizabeth Ukah says farmers are frustrated with mounting losses resulting from the variability of weather (All photos: Orji Sunday)

Michael Okorie, 54, wanders through a narrow muggy track on his way to his farm, wagging a cutlass and whistling some local Christian hymns. His tune makes him seem excited, but the expression on his face suggests subdued worries.

At the outset of yam planting season in February last year, he secured a loan of 60,000 Naira ($166) to make up his budget for yam farming. The loan came with a commitment to repay after harvest in a few months’ time.

He prepared nearby land and hired labourers to raise 316 heaps in readiness for the early rains of March that mark the start of the planting season. The rain softens the land so the yam tubers can take root and not dry up.

But the rains didn’t come in March, except for a few drops that quickly evaporated. Confused, Okorie planted in early April – praying his work would succeed.

The rain came in May, but it was too heavy and frequent. Flash floods followed, submerging his farm, dissolving the ridges, and scattering the yam seedlings in the nearby bushes.

“I lost a lot last year and got into heavy debt,” says Okorie. “It wasn’t this way in the past. Rain came in its time. Sunshine came in its season. Same as harmattan [seasonal winds]. But the seasons are becoming mysterious.” 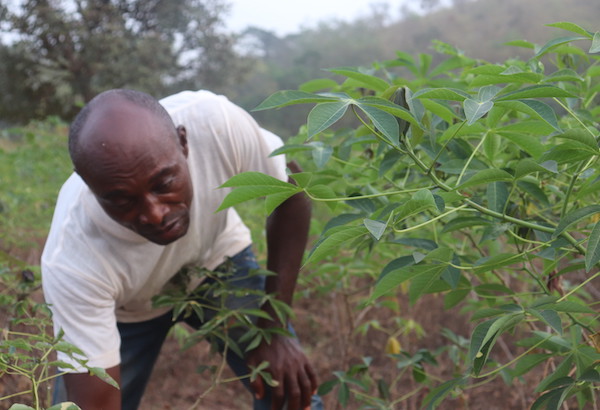 Okorie’s experience mirrors that of millions of other farmers, suffering from a sudden twist in weather conditions. Farmers report the late onset of rains and dry spells, rises in temperatures, heavy downpours and other unseasonable weather events – all potential consequences of climate change.

These changes have thrown out the normal seasons for planting, harvesting, weeding, applying fertilizers and storage.

The cost, experts warn, could be very high – particularly against the backdrop of an expected population boom, with Africa’s population set to double by 2050.

Feeding the population right now are smallholder farmers like Okorie, who produce around 90% of food in Nigeria, the most populous nation in Africa, according to figures from the UN Food and Agriculture Organization. The changing seasons and population growth will put an incredible pressure on the continent’s food production.

While times are tough, there are technological solutions on the horizon. The innovations can’t come quick enough for Nigeria’s farmers like Okorie, and those they feed.

In many rural communities like Okorie’s Ohofia, 40 kilometers from the southeastern state-city of Enugu, a blend of foresight, intuition, natural experience and – many believe – consultation with deities, has ensured survival for decades.

In Nigeria, farming is largely based on natural conditions. Crops and livestock have their ideal weather and seasons. Okorie says he could look at the overcast sky and predict perfectly how the weather would go, and plan his farming activities accordingly. Information is key – shaping when to sow, store or reap.

“Because the natural conditions were perfect and predictable,” says smallholder farmer of 40 years, Elizabeth Ukah, “farmers were in control of what came out of their seasons.” Recent conditions mean there hasn’t been any other time in her life that she felt so helpless about the outcomes of her farms, she says.

The farmers are working hard to adapt. When the weather started becoming mysterious, new farming, storage and farm practices were tested. The use of chemicals and fertilizers became widespread. Some left their crops longer in the ground. Others gambled with new planting, weeding and storage approaches.

There were some short-term successes, but the results were inconsistent, says Ukah, so people still felt helpless. The risks associated with the changing seasons are enormous.

A new study by Oxfam Nigeria and the West Africa Network for Peace-building Nigeria (WANEP) NGO has shown Nigeria’s economic productivity could decrease by up to 11% by 2020 and up to 30% by 2050 as a result of climate change.

“The truth is no farmers are safe in this land. We use to have enough harvest to feed our homes and sell abroad. But I am afraid that in the next ten years we may start importing food,” Okorie says.

Experts warn that rural farmers are poorly equipped to adapt to climate change. Many still don’t link the changing weather conditions to the climate crisis.

For Sunday Mpu, a local rice farmer from Ohofia’s neighbouring community, there can only be one explanation for all that’s happening to the weather – the end of times when God promised punishment upon a sinful world.

Other farmers agree, pointing to examples such as widespread conflicts and famine, as their pastor quotes from the book of Matthew nearby. “We are seeing the end of times” says Mpu, a key member of a local Pentecostal church in Nigeria.

Many farmers also think the solutions can only be spiritual.

“It is upon God to change control these things (the weather variations)” says Ukah. “For man cannot say when it would rain or stop. Or when the sun should shine.”

In part due to these entrenched views, the transition from traditional to more scientific approaches in dealing with how the climate is changing have been slow.

Heavy dependence on nature driven agricultural practices – like rain-feeding crops – are the result of both a lack of alternatives and absence of technical know-how and infrastructure, according to Professor Balogun Ahmed of the Department of Meteorology and Climate Science at the Federal University of Technology, Akure.

This is because low-income groups, and rural communities lack access to “critical resources and decision-making processes,” he says, leaving people with “fewer options and more risk in the face of climate impacts.”

But there are some solutions on the horizon, with small-scale technology-focused programs already having some impact.

Terrence Ovie is working to help both farmers and traders deal with post-harvest losses connected to climate change. 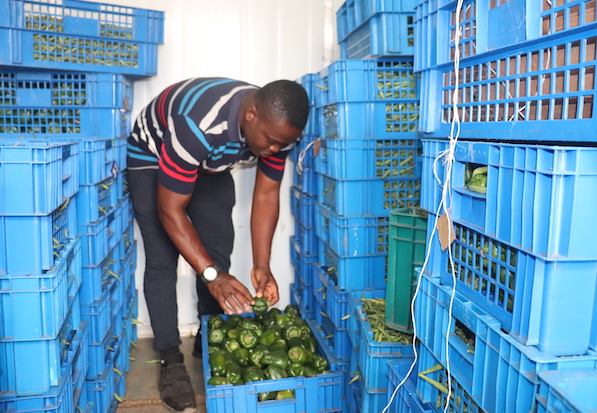 Terrence Ovie of ColdHubs inspects vegetables stored in cool temperatures at a market in Owerri, Nigeria

His civil society organization, ColdHubs, helps rural farmers avoid post-harvest losses. Ovie has created over 30 cold storage facilities – the ‘cold hubs’ after which the NGO is named – across markets and villages.

Running on solar power, these storage facilities serve many smallholder farmers who can deposit their products for storage at low rate subscriptions, cutting post-harvest losses by 80% and extending the lifespan of fruits and vegetables from 2 to 21 days.

“The drive is to minimize the losses associated with farming at various food chain,” says Ovie. “Though it’s difficult because local people are used to the old ways. It is like changing a culture.”

Two years ago, 28-year-old Abdul Aminu subscribed to Coldhubs at one of their stations at a vegetable market on the outskirts of Owerri, the capital city of Imo state, in south-eastern Nigeria. For a crate of fruit or vegetable, he pays a daily fee is 100 Naira (about 30 US cents).

“I lost a lot of money in the past. Now, I buy in larger quantities because there is a suitable storage facility in the market,” says Aminu. “I make twice the amount I could have gotten from my sales. The preservation facility allows me to avoid losses associated with panic sales, common with vegetables because of their short span.” 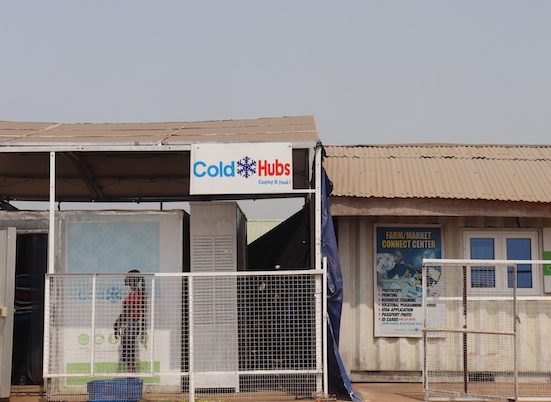 According to Ahmed, Nigeria needs to double “investment in local capacity and infrastructure to support people harmed by climate impacts as they rethink or rebuild their lives and businesses.”

Climatic realities that are changing by the year, and need many more innovations like Coldhubs to avoid farmers being left in the dust. 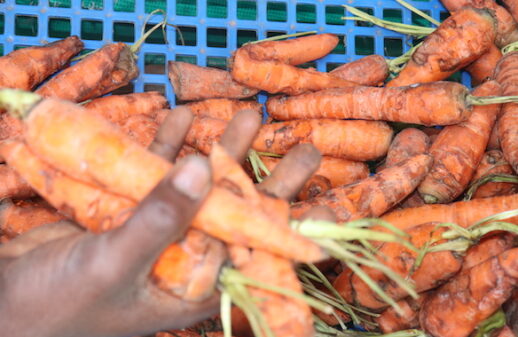 ColdHubs is helping farmers to store vegetables to keep them fresh