‘Faced with the state’s failure to respect objectives that can be perceived as minimal’ the action was ‘a very moderate disturbance’, the judgement said 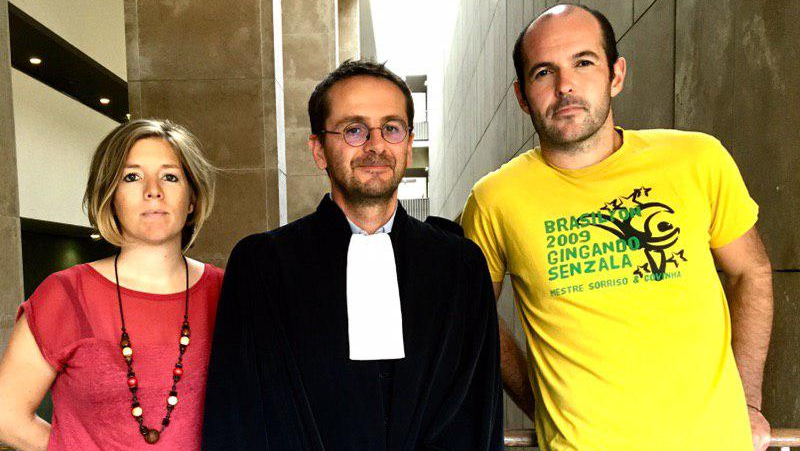 A French court dismissed charges against climate protesters after they took down Macron’s portrait in a townhall, claiming that they had acted out of necessity in the face of their government’s complacency.

Pierre Goinvic and Fanny Delahalle, from the climate civil disobedience movement ANV COP21 (Non-Violent Action COP21), risked a €500 fine for theft of the French president’s portrait from a town hall in Lyon in February.

More than 20 activists had stormed the townhall to support the action. “The theft is established and does nothing to resolve climate change,” prosecutor Rozenn Huon said at the start of the trial on 2 September.

But judge Marc-Emmanuel Gounot did not see it that way.

“Faced with the state’s failure to respect objectives that can be perceived as minimal in a vital area,” Gounot wrote in a 8-page verdict delivered on Monday, “the mode of expression of citizens in democratic countries cannot be reduced to votes cast during elections, but must invent other forms of participation as part of a duty of critical vigilance”, adding that the action represented “a very moderate disturbance to public order.”

The statement went on to credit “the minds of citizens deeply involved in a particular cause serving the general interest” and frame the the portrait removal as a “necessary substitute for the impracticable dialogue between the president of the republic and the people”.

Since 21 February, ANV-COP21 has taken down 133 portraits of Macron from town halls in protest at the French government’s lack of action.

The verdict took many by surprise in France, with judges only rarely resorting to the notion of “state of necessity”.

“His words allow the debate to breathe,” lawyer Thomas Fourrey said. “We are coming out of systematic repression, he is telling all those who are concerned about the state of the planet that they are in the right ”

Delahalle told CHN she was “extremely happy” about the decision.

“We hope that it will set a precedent,” Delahalle said. “To me this is really the sign that society is moving on climate, that it is currently understanding the emergency at stake and the current government is not up to the task”

The verdict comes after politicians and scientists flocked to the activists’ defence. Climate scientist Wolfgang Cramer provided data on greenhouse gas emissions to illustrate the climate emergency, while former housing minister Cécile Duflot, who now serves as CEO for Oxfam France, testified to the “lack of political will” on climate.

In an interview with France Info, Duflot also saluted the courage of the judge and said that the decision would go down in history.

“There are three very important things in this judgment: the recognition of climate inaction and real danger; the fact that, as citizens, we can legitimately question the executive power and the president of the republic in a way other than through elections; and this decision to release,” Duflot said. “There is an opportunity to act in the face of the extreme danger of the climate crisis.”

“I think that, frankly, unsociable behaviour does not deserve to be encouraged by decisions of this kind” minister of transport Elisabeth Borne told the state TV channel France 2 on Tuesday. The state prosecution has said it would appeal the case.

The next trials are due to take place in Muhouse and Nancy in the East of France on 9 October.