‘It’s beyond disproportion’, says group that has removed 27 portraits of Emmanuel Macron from town halls, as ‘green scare’ spreads in Europe 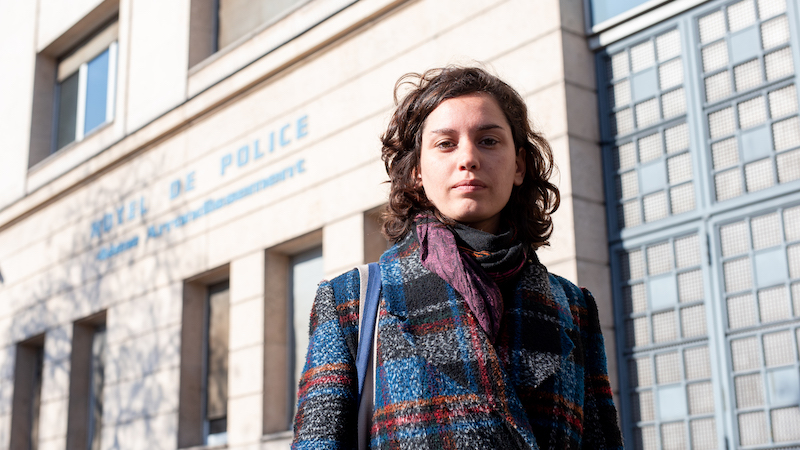 "We are considered terrorists when we’re citizens aware of the climate crisis." Marion Esnault, an activist who has taken down three portraits of Macron, outside a police station in Paris (Photo: Clément Tissot)

When Marion Esnault and comrades began removing portraits of president Emmanuel Macron from the walls of town halls across France they expected to get into trouble.

But last week, it emerged that their protest – up to 27 portraits so far – against what they say is Macron’s failure of climate leadership, has become the target of an investigation involving France’s Bureau de la Lutte Anti-terroriste (Blat), the office of counter-terrorism operations.

It was unclear what assistance the Blat are expected to give police. But Marion Esnault, an activist who has taken down three portraits of Macron in Paris, told Climate Home News that the involvement of an agency self-described as “specifically concerned with the prevention and repression of terrorism acts”, was disturbing.

According to ANV-COP21, 276 activists have taken part in actions since they began in February. In response, police have prosecuted 20 people, detained 22 people and carried out 16 police searches.

“We had thought that the repression we’d faced until now – all of the police custodies, the police searches, and the four trials with many incriminated activists – was out of proportion for a symbolic action,” said Esnault. “But for them now to call on the Blat, it’s beyond disproportion. There are no words. We are considered terrorists when we’re citizens aware of the climate crisis and the current ecological catastrophe.” 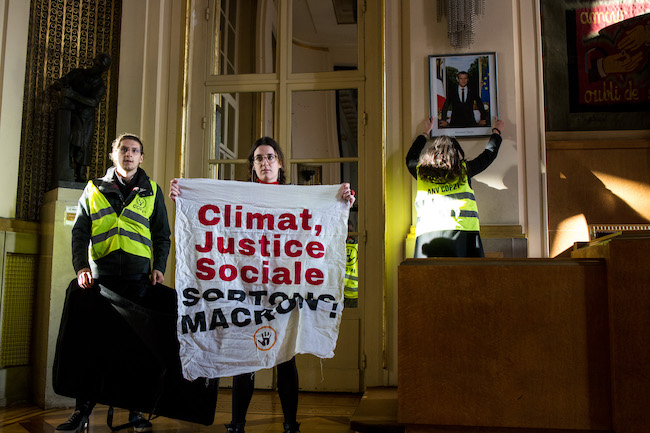 Climate activists from ANV-COP21 take down a portrait of president Emmanuel Macron in a Parisian townhall (Photo: Clément Tissot)

Esnault said she understood certain actions risked prosecution, such as when Greenpeace activists entered nuclear power stations. “It’s more surprising to see activists who enter townhalls to take down portraits of Macron, demanding that he lead more ambitious climate policy, end up with trials and police custodies,” she said.

“It isn’t normal to resort to anti-terrorist units in order to pursue activists whose acts threaten neither the security nor the integrity of the state,” Alexandre Faro, a lawyer representing members of ANV-COP21, told Reporterre. “These are theft charges, thus common law offences: what is the point of resorting to the office of anti-terrorist operations?”

The gendarmerie brushed off the correspondence, telling Reporterre that “just because the BLAT is involved doesn’t mean that it’ll take on exceptional proportions”. The letter wasn’t classified, they said, pointing out the “routine” tag pinned to the top of the message. The police force did not respond to questions from CHN.

Tarlé also instructed police forces to encourage mayors or state prefects to press charges against activists and “ensure that a judicial investigation be systematically carried out for aggravated robbery”.

The incident comes amid a hardening of responses from governments across western Europe to protest groups calling for a faster response to climate change.

Heather Albarrro, an associate lecturer in political ecology at Nottingham Trent University, said there were signs of a resurgence of “green scare” – a phenomenon in the mid-2000s during which the US government persecuted environmental activists. At its height, the FBI labelled the Earth Liberation Front as the nation’s lead domestic terrorist threat.

“The question of the green scare resurgence – maybe it’s not in full force as it was in previous decades,” Albarro told Climate Home News. “But then again, with the increasing severity of things like climate change and increasing desperation of some of these more radical strands, you might see more clamping down.”

Albarro said the key message of the green scare was that authorities “weren’t clamping down on these activists because they were a threat to life per se. What they are is a threat to the status quo in the sense of growth-oriented capitalism”.

In France last month, the French army was deployed to oversee demonstrations and protect public buildings from the gilets jaunes. Such a presence marked a first since 1947, when the French army overlooked mass-protests against the Marshall Plan.

In February, high commissioner of human rights Michelle Bachelet recommended the UN investigate France for excessive use of force by police forces against the gilets jaunes.

Outside France, the German government deployed one of the largest police forces since WWII to arrest activists occupying Hambach forest in an effort to keep coal giant RWE at bay. One person died in an accident, according to climate campaign group 350.org.

Meanwhile, the British government’s extremism analysis unit has produced a report called ‘Leftwing Activism and Extremism in the UK’, according a February investigation by the Guardian. Part of 21 reports designed to inform on extremism, including Islamist and far-right wing extremism, the document comes four years after it was revealed that an extremist database included politicians and activists. The political activities of Jenny Jones, a London assembly member, and Green Party councillor Ian Driver were recorded.