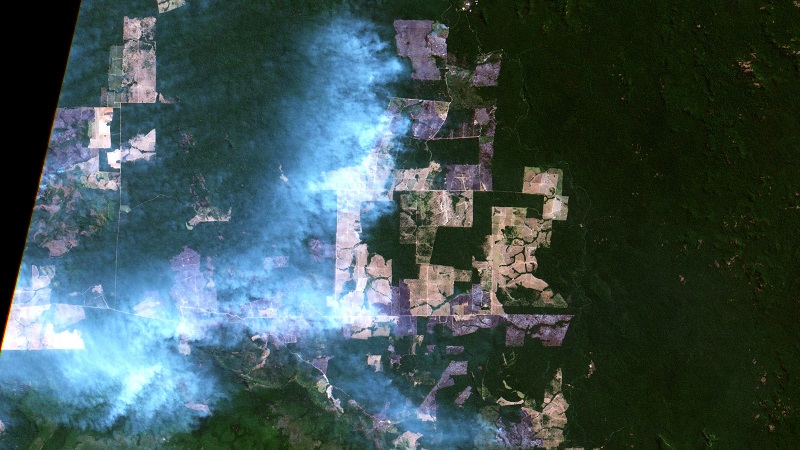 Ireland will try to block a free trade deal between the EU and South American Mercosur bloc unless Brazil takes action to protect the Amazon rainforest, Irish Prime Minister Leo Varadkar was quoted as saying on Friday.

Irish Independent reported that Varadkar was very concerned at the record levels of rainforest destruction.

“There is no way that Ireland will vote for the EU-Mercosur free trade agreement if Brazil does not honour its environmental commitments,” he said.

His comments came after French president Emmanuel Macron said on Thursday that the fires are an international emergency and called for the situation to be discussed at the G7 summit this weekend.

Our house is burning. Literally. The Amazon rain forest – the lungs which produces 20% of our planet’s oxygen – is on fire. It is an international crisis. Members of the G7 Summit, let’s discuss this emergency first order in two days! #ActForTheAmazon pic.twitter.com/dogOJj9big

“The Brazilian government remains open to dialogue, based on objective data and mutual respect,” he said, adding that discussing the issue at the G7 without the participation of South American countries “evokes a misplaced colonialist mindset”.

I’m deeply concerned by the fires in the Amazon rainforest. In the midst of the global climate crisis, we cannot afford more damage to a major source of oxygen and biodiversity.

The Amazon must be protected.

The wildfires raging in the Amazon rainforest have hit a record number this year, with 72,843 fires detected so far by Brazil’s space research center INPE.

The surge marks an 83% increase over the same period of 2018, the agency said on Tuesday, and is the highest since records began in 2013.

Although fires are a regular and natural occurrence during the dry season at this time of year, environmentalists blamed the sharp rise on farmers setting the forest alight to clear land for pasture.

Farmers may have had at least tacit encouragement from the firebrand right-wing president, who took power in January. Bolsonaro has repeatedly said he believes Brazil should open the Amazon up to business interests, to allow mining, agricultural and logging companies to exploit its natural resources.

Bolsonaro said on Thursday the government lacks the resources to fight the wildfires. He also said that while he could not prove that non-governmental groups were lighting the fires, they were “the most likely suspects.”

Federal prosecutors in Brazil said they were investigating a spike in deforestation and wildfires raging in the Amazon state of Pará to determine whether there has been reduced monitoring and enforcement of environmental protections.

Prosecutors said they would look into an ad that they said was published in a local newspaper encouraging farmers to participate in a “Fire Day,” in which they would burn large areas of forest “to show Bolsonaro their willingness to work.”

The president also said in a Facebook broadcast that countries giving money to preserve the Amazon do it to “interfere with our sovereignty,” and not for charity.

Earlier this month Norway and Germany suspended funding for projects to curb deforestation in Brazil after becoming alarmed by rising deforestation under Bolsonaro.

Indigenous groups who live in the Amazon rainforest and depend on it for survival said the wildfires in Brazil and eastern Bolivia were a “tragedy.”

“The lack of capacity of these governments and their lack of political will has caused the serious environmental tragedy that for weeks, and without precedent, already shows irreversible environmental damage,” indigenous Amazon organizations said.

Kumi Naidoo, secretary general of rights group Amnesty International, said responsibility to stop the wildfires “lies squarely” with Brazil’s government, which “must change their disastrous policy of opening up the rainforest for destruction.”