As high temperatures and dry thunderstorms turn the Arctic Circle into a tinderbox, the Arctic Council has been urged to step up firefighting capacity 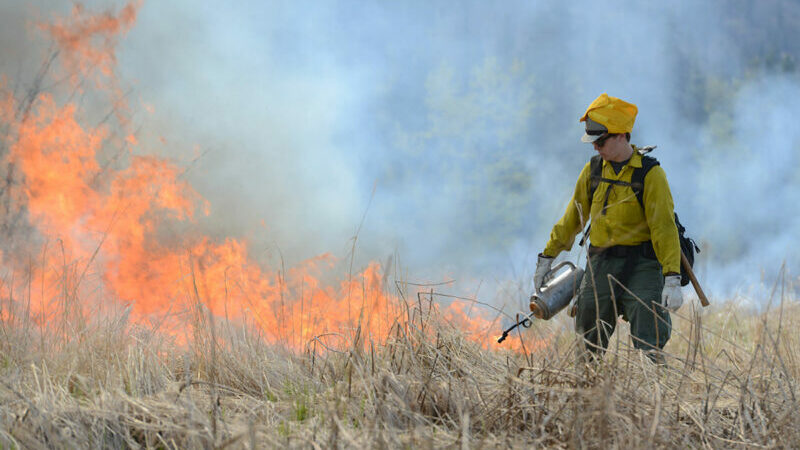 A crewmember from the Alaska Division of Forestry carries out a controlled burn (U.S. Air Force photo by Alejandro Peña)

Indigenous leaders are urging Arctic states to step up cooperation to tackle wildfires, as record blazes tear across the region.

Unusually hot weather along with dry thunderstorms this summer have combined to turn the Arctic Circle into a tinder box. More than 2.4 million acres of forest have burst into flames in Alaska. 13 million acres – an area bigger than Belgium – have burned in Siberia, Russia, unleashing plumes of smoke the size of the European Union. Meanwhile, fires continues to sweep through Northern Canada.

Edward Alexander, co-chair of Gwich’in Council International (GCI), a body representing the rights of 11,000 people in the indigenous territory of Alaska and permanent member of the Arctic Council, told Climate Home News that the region could no longer look south for emergency assistance, but had to build its own resilience.

In the event of extreme wildfires, states have been known to request firefighters from southern countries. July of last year was one example, when Sweden sought emergency assistance from the European Union and Turkey.

“What we’ve tried to say is: ‘Let’s look to the north to solve some of these problems, let’s look across the pole, and remember that there are resources around the table that we could bring to bear on new problems’,” Alexander said. “Whether that’s understanding the problems from a scientific point of view, or coordinating our emergency management systems and having some sort of agreement that’s based on the best practices of the region.”

US breaks from Arctic consensus on climate change

The group submitted a proposal to increase cooperation among Arctic states at the the Emergency Prevention, Preparedness and Response (EPPR) working group of the Arctic Council in June. Founded in 1996, the Arctic Council seeks to encourage cooperation between Arctic countries, especially in the area of environmental protection. Member states include Canada, Denmark, Finland, Iceland, Norway, Russia, Sweden and the United States, while six indigenous groups also sit in the negotiations as permanent participants.

The proposal would see states develop training partnerships to fight fires specific to the local ecosystems such as the taiga and pool expertise on fire management, including from indigenous communities.

It garnered enthusiasm, one source told CHN, with the US also stepping in to suggest creating a regional inventory of firefighters.

“It’s a big deal,” said Alexander. “Not just as an emergency response, but as a response to climate change. Wildland fire is not just an effect of climate change anymore, it’s also becoming a significant driver of climate change, and we really need to understand what’s going on there in the north. We also need to better work together to address the issue.”

Jens Peter Holst-Andersens, the chair of the EPPR working group, said that he was “thrilled that this project proposal on wildfires is from a permanent participant, because they are the people who live in Arctic and have to deal with the consequences of wildfires”.

A second proposal by the GCI aims to refine the region’s understanding of fire ecology by encouraging research into the impacts of fire on flora and drawing up a circumpolar map showing fires affecting the region, rather than a single-state.

Alexander said that the fires and climate change in general were having a profound impact on the lives of the Gwich’in people. Scattered across Alaska, most of the communities can only be accessed by air or snowmobile, largely relying on hunting for food. Fires have burned trap lines and disrupted people’s hunting traditions, while plumes of smoke have considerably lowered the local air quality.

“We’ve seen fish mortality,” Alexander said. “Some of the rivers got so warm that the fish died before they spawned. We’re seeing new insects. We’re seeing a prevalence of unusual species.”

The next Arctic Council meeting is slated for September in Stockholm, where member states intend to discuss Arctic cooperation on wildfires and oil spillages.