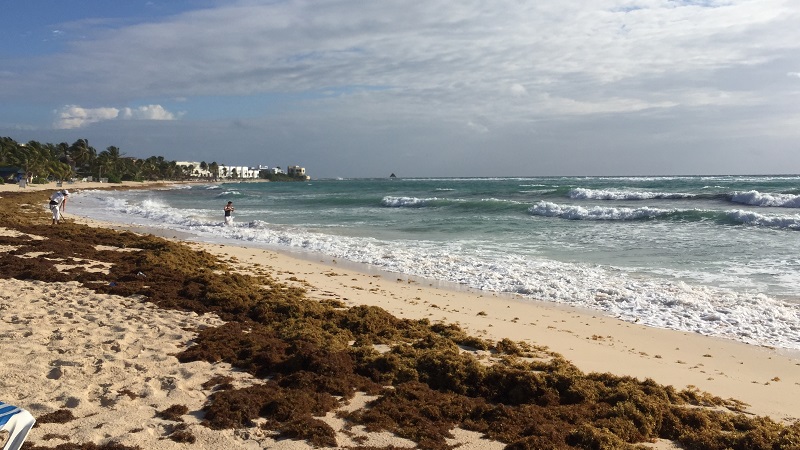 Sargassum, which smells like rotten eggs when it washes ashore and starts to rot, has covered the beaches of Mexico (Photo: Stephen Rees/Flickr)

The culprit, called sargassum, turns clear-blue sea water a murky brown and smells like rotten eggs when it washes ashore and starts to rot.

The seaweed is a natural occurrence on beaches in the Caribbean and elsewhere. It’s part of an ecosystem for fish, crabs and birds.

But it has proliferated dramatically in recent years, covering shores with thick layers of the weed and forcing tourism officials to clean it up so visitors keep coming.

It is an icky nuisance for tourists and an economic and environmental disaster.

“We came from over there, looking for a spot that is cleaner. But it is this way everywhere,” said Maria Guadalupe Vazquez, 70, pointing off into the horizon as she lounges in a beach chair in Miami Beach.

Authorities brought in trucks and front-loaders Friday to scoop the stuff up and haul it away. They know this is no long-term solution, however.

One problem is global warming – the hotter the ocean, the more these weeds reproduce, said Steve Leatherman, an environmental expert at Florida International University.

But the bigger problem is the Amazon river, he added.

Scientists say that starting around 2011, much more land along that mighty waterway was cleared for farming.

But it yields a poor, muddy red soil so farmers use a lot of fertiliser, which rains wash into the river, where it flows into the Atlantic. And the fertiliser ends up fertilising the sargassum.

“We think this is going to be the new normal so we are going to have to find a way to deal with this, and it’s going to be difficult,” said Leatherman, aka Dr Beach, as he drove by piles of sargassum on Miami Beach.

The stuff is nothing new. When Christopher Columbus saw a bloom of sargassum to the east of the Bahamas, it was so thick he thought it was an island.

That was out at sea, however.

“What happens out in the Atlantic Ocean, it’s fine. But now this is an economic and environmental disaster,” said Leatherman.

The pernicious effects are many: fishing boats have trouble starting their engines. Beaches are disgusting for tourists. Fish choke because the seaweed absorbs too much oxygen. Turtles struggle to find a place to lay eggs. When they do, the babies cannot make it from the shore out to sea. And dead seaweed sinks, smothering coral reefs.

No one has calculated how much damage is being done to countries’ fishing and tourism industries.

In the British Virgin Islands, the layer of seaweed is two meters thick. Punta Cana, a beach in the Dominican Republic that is famous for its clear water, has turned brown.

Barbados recently declared a national emergency. Mexico has called in the navy to restore the beauty of tourist hub Cancun.

“I don’t know what’s going on but it’s really not a good sight to see, you know what I’m saying? We’re tourists,” said Sed Walker, 48, who was visiting from Los Angeles.

A study published in July by the University of South Florida in the journal Science concluded that the seaweed problem, which started in 2001 and showed peaks in 2015 and 2018, is here to stay.

Satellite imagery shows blooms of sargassum form at the mouth of the Amazon. From there it spreads across the Atlantic, from the Caribbean and the Gulf of Mexico to Africa.

Scientists named it the Great Atlantic Sargassum Belt (GASB). In 2015 and 2018, it stretched over nearly 5,592 miles. In June of last year, its biomass exceeded 20 million tons.

The study blamed the sargassum explosion on discharges of fertiliser in the Amazon and natural nutrients along the coast of Africa.

“A critical question is whether we have reached the point where recurrent GASB and beaching events may become the new norm,” wrote Chuanmin Hu, the lead author of the study and a professor of optical oceanography at the university.

“Under continued nutrient enrichment due to deforestation and fertiliser use in agriculture,” Hu wrote, “the answer is likely positive.”