Parliamentarians from the EU’s power blocs might talk tough on global warming, but don’t engage with the most influential social media accounts, analysis shows 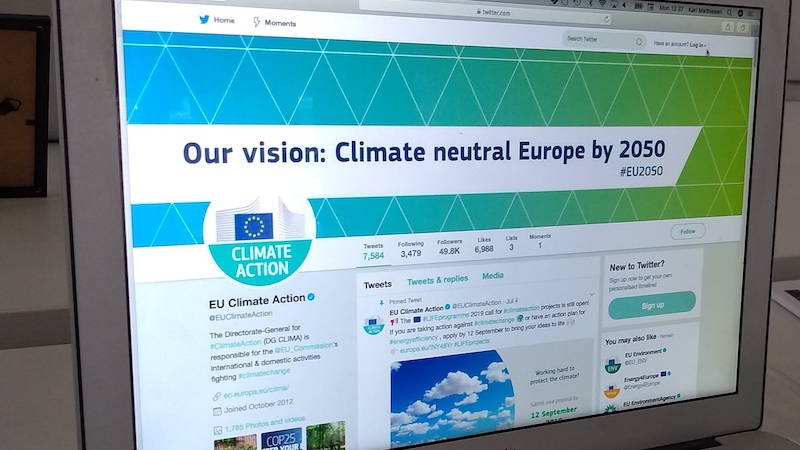 627 out of 751 MEPs may have Twitter accounts, but the vast majority are yet to join the conversation of the century.

Using a tool developed by Politico Europe and the journalist James O’Malley to track which Twitter accounts MEPs followed, Climate Home News found that most MEPs within the power blocs of the conservative European People’s Party (EPP), Social Democrats (S&D) and liberal Renew Europe (RE) groups do not follow a selection of most influential accounts on climate change.

This is despite the blocs’ pledges to address the climate crisis as a matter of priority, with RE and S&D currently demanding the EPP’s nominee for commission president present a tough plan for cutting emissions. The fourth largest grouping, the Greens, had a far higher engagement rate.

Compiled by CHN, the list of 80 accounts (see below) featured key climate activists, campaign groups, institutions, EU politicians, UN figures, scientists, publications and think tanks. Just 6 out of 80 accounts were followed by more than 5% of MEPs from the EPP. That figure increased to 9 in the case of the RE, 14 in that of the S&D and to 44 in that of the Greens.

European representatives also took little notice of what ten of the world’s top climate scientists had to say. Pennsylvania State University’s Michael Mann was the most followed. But out of his 150,000 followers, only 7 were MEPs, with 5 of these from the Greens, 1 from the S&D and 1 from the EPP. No deputies from RE’s 94 MEPs subscribed to the account. Less than two MEPs from each of the three largest blocs followed a scientist.

The profiles of followers of the figurehead of the climate school strikes, Greta Thunberg, provide a case a point. Most of these hailed from the Greens (49% of the bloc follow her),  S&D (20%) and GUE-NGL (26%). In contrast, only 8% of the RE and 4% of the EPP followed the Swedish teenager. Zero MEPs from the right-wing populist group of Identity and Democracy (I&D) have signed up to her account.

On the few occasions conservative EPP members enter the climate bubble, they privilege institutions, with 12 MEPs, or 8% of the EPP, following the account for the EU directorate-general for climate action.

Disengagement with specialized sources of knowledge is also chronic. By one MEP, CHN beat both Carbon Brief and Business Green as the most followed specialized English-language climate publication, with 14 MEPs. Considering that represents little more than 2% of the European Parliament, climate publications are losers on all counts in the MEP twittersphere.

Paris-based IDDRI and E3G were the most followed climate change think tanks, with 12 subscribers each. The Centre for Climate and Energy Solutions was all but ignored by MEPs, despite ranking as the world’s fourth most influential environmental think tank according to the Global Go To Think Tank Report 2018. Generally our selected think tanks left MEPs cold.

Our analysis looked into the extent to which MEPs followed what CHN considers some of the most influential figures of the climate Twittersphere. It’s our assumption that anyone engaging in policy about this issue would find at least some of these accounts interesting, provocative or useful. With 627 out of 751 MEPs on the social network, the data gives a snapshot impression of how engaged the European Parliament is with climate matters.

There are a few caveats to mind when looking at the results. The Politico tool uses data from late June and is not updated in real time so if an MEP has followed or unfollowed someone that will not be reflected in the results. It also does not distinguish between an account that is followed by one or zero MEPs.

The list of influential accounts by CHN does not claim to be exhaustive. In order to minimise the chances of results being skewed along political lines, we have chosen to include a variety of voices belonging to the fields of climate campaigning, research, or politics. We selected ten top accounts for the following categories: climate activists, movements and campaign groups, scientists, think tanks, publications, climate institutions and EU institutions.

CHN included Twitter accounts on the basis of their number of followers, while also trying to mind factors such as gender balance or nationality.

Friends of the Earth @friends_earth

The Center for Climate and Energy Solutions @C2ES_org