Lawmakers backed the German politician as European Commission president by a slim majority on Tuesday, after she met calls to strengthen climate ambition 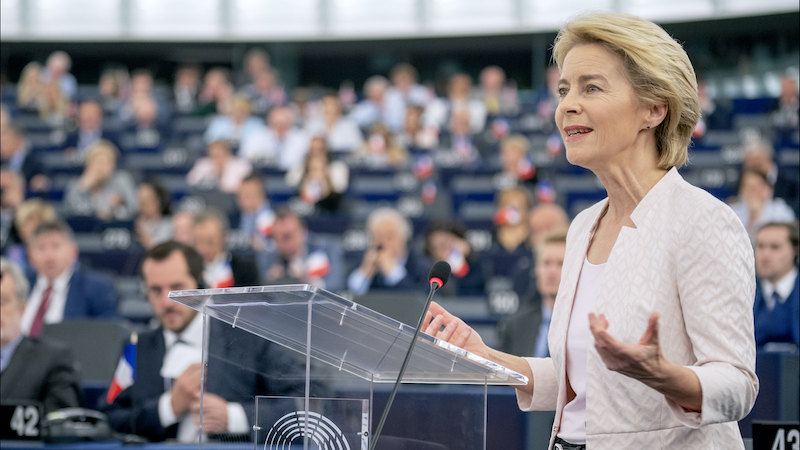 The European Parliament confirmed Ursula von der Leyen as the first women president of the European Commission in a nail-biting vote on Tuesday that put climate change centre stage.

The German former defence minister scraped the majority she needed, with 383 votes to 327. Both the liberal Renew Europe and the Socialists and Democrats (S&D) groups announced they would back her nomination less than an hour before the secret ballot started.

Climate change played a decisive role after liberal, socialist and green blocs all demanded von der Leyen strengthen her climate platform as a condition for their support.

In a statement, S&D said members had been “sceptical” of her candidacy but after an “intense group meeting” acknowledged she had met their core demands, including on climate action.

“We will be vigilant and make sure that over the next five years she will deliver on the promises she made to us. She must remember that without us, there is no pro-European majority,” said S&D leader Iratxe García.

Céline Charveriat, executive director of the Institute for European Environmental Policy, said that for the first time, climate change had become “a make or break issue for garnering sufficient votes”. “Parties other than [the conservative European People’s Party] agreed not to give a ‘blank check’” to von der Leyen, she said.

“This means that climate change will become a signature issue for [von der Leyen]. She will be held personally accountable for delivering on her promises regarding climate action,” Charveriat said, adding she faces an “uphill battle” to achieve consensus on decarbonisation measures.

Following an intense fortnight of negotiations with the EU’s key political groupings, von der Leyen appeared to embrace increasing the EU’s emissions reduction target to 55% by 2030 – a target the EU parliament endorsed in a non-binding vote last March.

In her final proposal to MEPs ahead of the vote, that commitment was watered down to a “two-step approach” to “reduce CO2 emissions by 2030 by 50, if not 55%”.

Greens, the fourth largest contingent in parliament, remained unconvinced by her climate offer. Nationalists, populists and some in her centre-right European People’s Party (EPP), on the other hand, thought she had made too many concessions to the progressives. Ultimately, they did not have the numbers to thwart her victory.

In a press conference ahead of the vote, Ska Keller, co-chair of the Green grouping, said von der Leyen failed to answer the Greens’ political demands with concrete proposals. Her co-chair Philippe Lamberts added that they had only been given “morsels” of proposals at the last minute.

Bas Eickhout, a Dutch Green MEP, told von der Leyen in an earlier parliamentary session on Tuesday: “You are fiddling around with the minus 50%, minus 55% but what is Europe going to officially put on the table when [the] Paris [Agreement] officially starts in December 2020? Still unclear”.

Vallejo said the parliament’s push for more ambitious climate plans showed that climate issues had become “mainstream” in Strasbourg. “This could have a lasting impact over the commission’s five-year mandate on climate and environmental issues,” she said.

She added that von der Leyen had to tread a fine line to keep the large consensus she needs without alienating her own conservative group, the EPP, which has not committed to the 55% target.

Suzana Carp, a Brussels-based campaigner at think-tank Sandbag, took a different a view. “I don’t think this process has raised the benchmark on climate action,” she told Climate Home News.

Von der Leyen’s climate plan “does not respond to the climate movement around Europe, nor does it give in to the Green agenda,” she said. “[The plan] she has presented is the lowest common denominator for climate action and is aligned with the EPP, her own party.”

As part of her climate package, von der Leyen pledged to present a “green deal” for Europe in her first 100 days in office but gave little indication about what the deal would entail. She committed to legislate on the bloc achieving carbon neutrality by 2050 and lead international negotiations to increase the level of ambition of other large emitters by 2021.

Other measures include turning parts of the European Investment Bank into a climate bank to unlock €1 trillion of investment over the next decade, establishing a just transition fund and imposing a carbon border tax.

She had just two weeks to present her plans to parliament and win majority support.

Before the vote on Tuesday, a string of MEPs expressed concerns and anger over von der Leyen’s nomination, with several S&D members saying she had provided little substance behind her headline announcements.

In her closing remarks before the vote, von der Leyen said discussions on her nomination had been “constructive” and “controversial” and acknowledged a “feeling of division” within Europe that had to be overcome.

“I want to get involved and get closer to this European Parliament,” she said. “I want to build new trust and partnership between the EU Commission and the EU Parliament.”