Russia says it wants a seat at the climate negotiations table, but the president warned problems with renewable energy must be considered 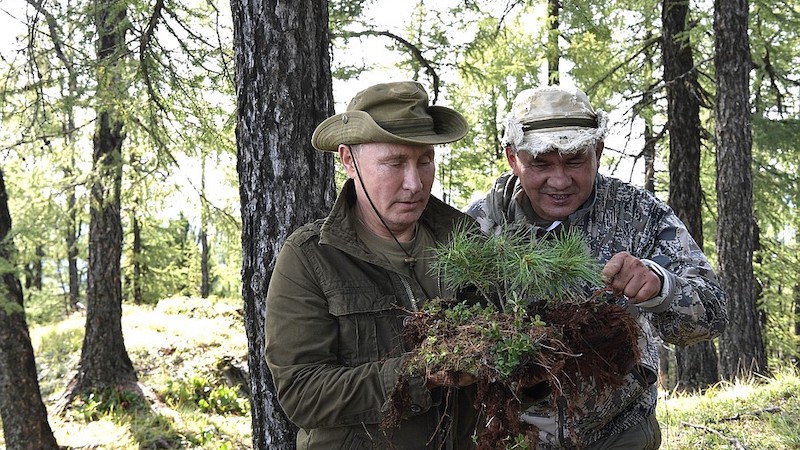 Russian president Vladimir Putin on a weekend visit to the Siberian republic of Tyva with defence minister Sergei Shoigu in 2018 (Photo: Kremlin)

The Russian government will submit legislation to ratify the Paris climate agreement by September, but president Vladimir Putin warned against the perils of “absolutist” renewable energy.

On Friday, deputy prime minister Alexei Gordeev ordered the ministries of environment and foreign affairs to submit a bill to ratify the accord to parliament by September 1, according to a government statement.

The country, which ranks as the world’s fourth biggest polluter, is one of 12 out of 197 signatories to the Paris Agreement not to have ratified the accord.

The communiqué said it was “now necessary… to launch the process of ratification before the World Climate Action Summit [on 23] September 2019” – a key, last-chance climate conference convened by UN chief Antonio Guterres that aims to boost countries’ emission reduction pledges.

The move follows months of back-and-forth consultations between the economic development ministry, which penned the law, and the ministries of resources and environment and foreign affairs.

The government statement said ratification of the Paris Agreement “could give Russia additional opportunities to participate in all negotiation processes and protect its interests in international fora that define the rules for reducing CO2 emissions and develop relevant documents”.

Aside from the looming climate action summit, the government also cited a global shift in demand towards low carbon energy as a reason for the bill. “The world’s electric power industry is becoming less carbon-intensive, and this predetermines the competitive advantage of goods produced in countries with greener energy,” it read.

David Attenborough: Climate change may become abhorred as much as slavery

On Tuesday at a global manufacturing and industrialisation conference he was hosting in Yekaterinburg, president Vladimir Putin said Russia was experiencing the effects of the climate crisis, with Arctic temperatures rising faster than anywhere on the planet.

“The degradation of nature and climate continues,” Putin said. “And it’s getting more and more acute with droughts, bad harvests, natural disasters.”

However Putin said renewable energy should not lead to “the complete abandonment of nuclear or hydrocarbon energy”. He urged international cooperation on nuclear power development and warned against energy “absolutism” and said “blind faith in simple, showy, but ineffective solutions leads to problems”.

The Russian leader said: “Will it be comfortable for people to live on a planet with a palisade of wind turbines and several layers of solar panels?”

He continued: “Everybody knows wind energy is good, but are they remembering about the birds in this case? How many birds are dying? They shake so much that worms come out of the ground. Really, it’s not a joke, it’s a serious consequence of these modern ways of getting energy. I’m not saying that it doesn’t need to be developed, of course, but we shouldn’t forget about the problems associated with it.”

There are no references to worms emerging from the ground because of the vibration of windmills in scientific literature. The only online mention in English is a 2011 post on a US anti-wind power blog site.

Russia is in the process of reviewing a framework climate legislation to regulate greenhouse gas emissions. Currently under debate in Russia’s upper chamber, the legislation would give the government powers to introduce greenhouse gas emission targets for companies and charges for those that exceed them, with proceeds potentially going into a fund to support carbon-cutting projects. It also lays the groundwork for a cap and trade system, emissions permits and tax breaks for companies reducing or capturing their emissions.

NGOs have cautiously welcomed the bills in a country traditionally hostile to climate action, with the autocratic regime repeatedly thwarting any attempt by students to organise climate marches.

Meanwhile, the government continues to seek out partnerships with China for oil exploration in the Arctic. In June, China National Chemical Engineering signed an agreement with oil company Neftegazholding, a sister company to the state oil company, Rosnef, to explore Payaha oil field in Taymyr peninsula in North Siberia. It is estimated that the whole field has 420 million tons of oil reserves.